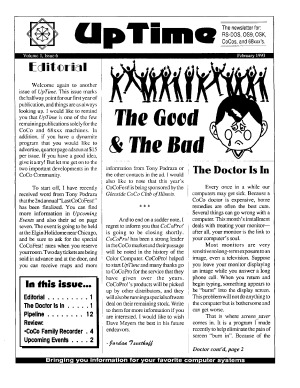 We offer support for all Motorola based computer systems and microcontrollers, and the OS-9 operating system.

I'm the person who conceived of and published "the world of 68' micros" -- Frank (Francis) Swygert. The title is correct -- it was officially in all lower case to emphasize "micro" computers. For shorthand I often used "268'm" (two - the world of) in messages on Delphi and in the magazine. I started thinking about something like this when Falsoft started printing Rainbow on newsprint. I didn't think Rainbow would last long after that. I'd been working with a friend who owned a print shop for a while and had self-published a book on AMC cars (my first passion, even before the CoCo or other computers -- in fact writing about the cars is why I bought a CoCo, for word processing). I thought that if Rainbow stopped publishing, I should be able to put something nice out. I wouldn't have the overhead and needs of a decent sized publisher like Falsoft had become, but would be more like when Falsoft started.

One day I decided to contact Falsoft about possibly taking over Rainbow since it obviously wasn't making them money. I actually got a letter with Lonnie Falk's phone number and an invitation to call. In case no one remembers, he was the owner of Falsoft and started Rainbow as a photo copied newsletter. We talked a bit and I laid out my plans. The problem was Lonnie didn't want to let anyone take over Rainbow. He started it, he wanted to finish it. The main thing is he didn't want someone taking over then possibly giving it a bad reputation, especially if it folded shortly after, which was a possibility. He had no idea who I was at the time or what my capabilities or determination were, so his position was completely understandable. We discussed my getting the mailing list, but he was a bit reluctant about that too. He ended up offering to sell it at market rate, which would have busted my budget! Luckily I called just in time -- unknown to subscribers, the last issue of Rainbow was being set up right then. Lonnie let me know I had just a couple weeks to get an ad in the last issue -- at their market rate, of course.

You know, I understood the thing about not wanting someone to continue Rainbow as Rainbow, or with any type of official endorsement from Falsoft, but I never did and still don't understand him not either giving me the mailing list or negotiating something I could afford. I was promising to continue to support customers and CoCo enthusiasts that he was abandoning with little warning (though financially the company pretty much had to). As I recall, the only notice (except for the newspaper style issues) was in the very last issue. Renewals were taken just one issue prior, then those renewals were filled with a Tandy DOS machine magazine -- no refunds. I even offered to have Falsoft print a postcard for all the CoCo users and I'd pay printing and postage, and never see the mailing list, but he was unwilling to do anything to help the remaining CoCo people. That never did sit well with me... in case you couldn't tell.

I had a limited budget to start the venture, but it did pay off. Not like it eventually paid off for Falsoft, but enough to make it a nice "paying hobby", or rather a hobby that paid for itself. I made enough that I didn't drop a dime from my household budget in the magazine (except for start-up costs), was able to keep my CoCo and PC (you couldn't produce a magazine of any quality on a CoCo, but I did use the CoCo for many tasks -- Delphi mail and the mailing database, for example) up to date, and even paid for many trips from Georgia to Chicago for the CoCoFests. I usually made a few hundred dollars at the fests after expenses with back issue, book, and software sales. So I was happy -- this was a hobby venture from the start, and I had no allusions that it could grow into anything more. The CoCo community was still thriving at the time, but no one can argue the fact that it was obviously dwindling as time wore on.

The day came that I finally decided I no longer had time to print 268'm -- after seven years of publishing. The last fest I went to had cost me a couple hundred dollars, and I had other interests as well. I didn't bail because I was no longer making money -- except for the fest trip I was still making a bit. In the end I was working for about $2.00 an hour putting 268'm out. My original goal was to do it with no out-of-pocket costs, and I was still doing that. Time for my family and other interests, and a lessening of my interests in the CoCo in general, are the reasons I decided to cease publishing.

When I stopped printing "268'm" (early 1998), I did consider the fact that I had a loyal subscriber base that still had an interest in the CoCo. No offense to Lonnie Falk, but I didn't want to just suddenly drop support like he did. I tried to find someone to take the publication over at no cost by announcing that fact in the magazine, and letting subscribers know that I wouldn't just stop printing without warning. After about six months I found a taker, Stephen Disney. We made an arrangement where I paid for the printing and mailing of the next two issues, and forwarded all renewal funds from the take-over date on. I usually received enough renewals to cover printing and mailing costs between issues even at that late stage of the game, so that plan should have given a little extra to start off. We did discuss all business aspects, and that the magazine alone would be little more than a break-even proposition -- I didn't want anyone having a false hope of making any money off the deal, it would basically be a hobby that paid its own way.

Unfortunately Stephen ran into problems and only printed another issue or two after the printing money ran out (4-5 total), and around 100 subscribers lost a little money -- some the entire $20 subscription price, but most half that or less. I never could get in touch with Stephen again. It's possible that after the announcement that I was personally getting out of publishing that a lot of people simply didn't renew. The two issues printed after I left off were as nicely done as I had printed, in my opinion (the deal included a copy of PageMaker software and templates to ensure reasonable quality and little change in appearance at first -- and no start-up costs). Not getting enough renewals to cover printing and postage expenses would have been disheartening to say the least, but I think Stephen had some personal problems (a divorce?) that caused his sudden disappearance from the CoCo community.

I do realize that something like that is what Lonnie Falk did not want to happen, and is why he didn't assist me with continuing where "Rainbow" left off. I started to type "take the place of Rainbow", but that wouldn't be correct. I don't think anything could have done that for two reasons -- 1) Rainbow's well deserved reputation, and 2) there just wasn't that big of a CoCo community any more. In retrospect, however, I think 268'm would have lasted longer and reached a lot more people if he had, and the CoCo community would be the stronger for it. But no one can divine the future, and you just don't know what others are capable of until you've seen them work.

I sold my two custom CoCo3s years ago, around 1998. I considered keeping them, but thought it better to let someone who was still interested in and had the time to play/work with the CoCo have them. I'm an old car nut too, and have always hated seeing a car sitting and rusting away because someone was going to "fix it up one day" -- but you just knew it would never happen. I didn't want that happening to my CoCos -- I'd rather know someone got a bit more enjoyment from them before they were permanently retired. If anyone has one of them, by the way, I'd like to know what became of them! They would be easy to spot -- one was in a modified Tandy 2000 case with a space cut out for a 3.5" floppy drive, and the other was in a Kaypro II metal "luggable" case painted blue with a red and a green stripe on it.