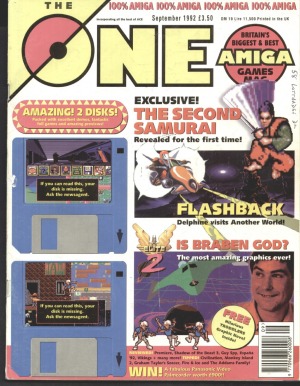 The One was a video game magazine in the United Kingdom which covered 16-bit home gaming during the late 1980s and early 1990s. It was first published by EMAP in October 1988 and initially covered computer games aimed at the Atari ST, Commodore Amiga, and IBM PC markets.

DESCRIPTION
The One was a video game magazine in the United Kingdom which covered 16-bit home gaming during the late 1980s and early 1990s. It was first published by EMAP in October 1988 and initially covered computer games aimed at the Atari ST, Commodore Amiga, and IBM PC markets.

The magazine was sometimes criticised for including "filler" content such as articles on Arnold Schwarzenegger with the justification that an upcoming film had a computer game tie-in.

Readers also initially had trouble buying the magazine due to the name; The One lead to confusion among newsagents over exactly which magazine they meant. 1988 and the 16-bit computer scene was beginning to emerge. With Commodore's Amiga and Atari's ST starting to gain more and more coverage in the multi format titles, EMAP decided it was time for a dedicated magazine to cater for these 16-bit super computers. The One for 16-Bit Games was launched and covered the Atari ST, Amiga, and PC games market. Produced by editor Gary Penn and a small team of contributors, the magazine went on to gain respectable circulation figures of over 40,000 readers.

The industry voted The One for 16-Bit Games "Magazine of the Year" in February 1990.

In June 1990, the magazine was extensively redesigned. Some regular features were dropped, the layout was changed, and the logo changed slightly to more emphasize ONE.

The ST and Amiga had reached new highs of success by 1991 and there were dozens of single format magazines taking advantage of this. Taking advantage of this trend EMAP, along with recently appointed editor Ciarán Brennan, made the decision to split the magazine into The One for Amiga Games and The One for ST Games. PC games coverage was transferred to the recently launched PC Leisure. 1991 was the start of the 16-bit golden age. The 8-bit computers were in an irreversible decline and gamers were quickly moving over to the faster and more powerful 16-bit formats. Because many features fell into the general computing category, content remained similar between the two magazines. Because both magazines were produced by the same production team, the magazines had the same likeness, almost like twin magazines. However a few months later both titles would move in their own directions, catering for platform specific games. In 1992 EMAP was shaking up their games magazines. Mean Machines was split into two, The One for ST Games was incorporated into Europress's ST Action, and ACE magazine closed. ACE magazine closing meant that there was a well-respected team available. To give the magazine a new direction and look, the original staff were moved and the ACE writers took their place. The change of The One was evident with magazines' relaunch. New editor, Jim Douglas, and his team produced the new magazine, with its shortened logo THE ONE, with the subtitle 'Incorporating all the best of ACE'. As the subtitle suggested, the magazine layout and content was essentially The One with some of the best content of ACE, all gelled together to produce an entirely new magazine.

Just months after the redesign, most of the staff moved on and David Upchurch took over editorship. Again, the magazine gained the 'Amiga' onto its title. Now called The One Amiga, this would allow potential readers recognise the magazine as an Amiga title. The staples were also replaced in favour of a spine bound magazine.

There were many significant changes to the Amiga market in 1993. More coverage was given to games that were A1200 specific and there was the launch of the CD32. All formats were accommodated within the magazine by way of the details box which indicated what specification the game was designed for.

In March 1994, David Upchurch announced that this would be his last issue. Deputy Editor, Simon Bryon, stepped up to replace him. Just eight issues later and the cycle repeated itself, Simon Byron left and, then Deputy Editor, Andy Nuttall replaced him. Despite the new editorship and optimism the magazine page count decreased to 84.

July 1995 and it was announced that EMAP was closing the magazine down. The One content was incorporated into EMAP's other Amiga title, CU Amiga. This wasn't the end of The One magazine as Maverick Magazines bought the title and launched their first edition in August 1995. However, it was obvious from the onset that this version, dubbed The One: Maverick Edition, was a slimmed down hybrid of a magazine. It looked like The One but it lacked the former writing style and spirit of the EMAP team. The magazine quickly decreased to a mere pamphlet style magazine of just 16 pages before dying off with the final issue of July 1996.