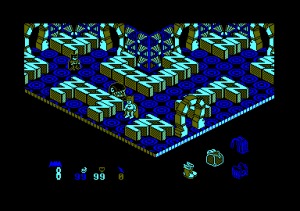 A collection of emulated games for the Amstrad CPC.

Bart vs. The Space Mutants  is a platform game where the player goes into the role of Bart Simpson (from the TV show The Simpsons) and must stop the Space Mutants from invading Springfield. On each of the five levels, Bart must collect (or get rid of) the ingredients that the Space Mutants are planning to use to build their machine, such as purple objects or balloons. He also has to collect enough "proof" of the aliens existence (brown coins left behind when they are jumped on), so...
Topics: The Simpsons, Amstrad CPC

Six short mathematical tests aimed at children up to 7 years of age come together in this package. Sooty the silent magical bear is one of the UK’s most enduring children’s characters, and his friends Sweep the squeaking dog and Soo the talking bear join him here. The games can be played with little or no computer knowledge, and feature full graphics. In Magic Numbers the player must count how many wands Sooty has on the screen. Sweep’s Bones involves moving bones from a pile on the right...
Topics: Sooty & Sweep, Amstrad CPC

All the toys in the World have been stolen by the Greed Monster, so Top Cat has sent Yogi's Treasure Hunters to find them all. Problem is, all the hunters have been captured by the monster except Yogi, so it's up to Yogi to find his friends and all the toys. The game is a flick-screen maze game viewed from a high elevated angle as you control Yogi. You have to search the surrounding areas looking for your friends and toys while avoiding or shooting various creatures. You are armed with sweets...
Topics: Yogi Bear, Amstrad CPC

April O'Neil, the reporter friend of the Teenage Mutant Ninja Turtles, is kidnapped by the villainous Shredder and his two goons, Bebop and Rocksteady. The four ninja turtles: Raphael, Michelangelo, Donatello and Leonardo fight their way through hordes of Foot Soldiers in order to rescue April. They battle familiar foes such as the mad scientist Baxter Stockman, General Traag from Dimension X and the evil alien brain Krang, up to the final showdown with Shredder himself. Teenage Mutant Ninja...
Topics: TMNT, Amstrad CPC

This computer coloring book is another part in the  Electric Crayon  series and it has 30 pictures of different world places, such as Kremlin, Redwood, Taj Mahal, Fuji, Alps, etc., with Teenage Mutant Ninja Turtles to color. Pictures could be colored from a palette of 16 colors. Choosing a color and clicking in the picture do a color fill in the area clicked. The finished, or in progress, coloring was automatically saved to disk. Player may also remove all colors applied previously to start...
Topics: TMNT, Amstrad CPC

La abadía del crimen (The Abbey of Crime) is a computer video game programmed in 1987 by Paco Menéndez with graphics made by Juan Delcán. The game was originally conceived as a version of Umberto Eco 's book "The Name of the Rose". However, Paco Menéndez and Opera Soft received no reply from Eco in order to secure the rights for the name, so the game was released as La abadía del crimen . "The Abbey of Crime" was in fact the original working title of the novel The Name...
Topics: Amstrad CPC, Amstrad, Paco Menéndez, Juan Delcán

Your task is to rescue the Lemmings across 120 levels of fast-paced puzzling. These creatures simply walk blindly through the world in the hope of reaching safety at the end of the level - unfortunately these levels include steep drops, gaps in the ground, barriers and rivers amongst other hazards. You are in control not of any individual Lemming, but of a cross-hair, which can be moved over any of the Lemmings. Along the bottom are a selection of functions which can be assigned to a Lemming,...
Topics: Lemmings, Amstrad CPC

(attempting to upload an Amstrad CPC game) BB4CPC (shorthand for "Bubble Bobble for CPC") is a retro remake of "Bubble Bobble" for the Amstrad CPC 8-bit home computer series. It was developed with the purpose of running on any CPC machine, regardless of RAM size or CRTC model, while staying as faithful to the original game as it could be done in 48 kB of code and data. It was developed by César N.G., under the label cngsoft, and first released on December 26, 2011, and...
Topics: Bubble Bobble, Amstrad

If you need to calculate how to make WHO handrub for hand sanitation, this Amstrad CPC programme is here to help. NB : this process uses flammable, toxic and corrosive chemicals. Follow instructions, handle with care.
Topics: amstrad cpc, basic, sanitizer, calculator

Motos (1987)(Mastertronic Added Dimension) Also For Arcade, Commodore 64, Sharp X68000, ZX Spectrum Released 1987 Published by M.A.D. Developed by Namco Limited Genre Action Gameplay Arcade Perspective Top-down Description In this game, you control a bumper car, and the object is to bump your opponents off the gameboard while they do the same to you, and once you have managed to bump all your opponents off the board, you move on to the next round. If you take too long to complete a round, a...

Rath Tha (1989)(Positive)(es) Also For DOS, MSX, ZX Spectrum Released 1989 Published by Positive Developed by Positive Genre Action Setting Sci-Fi / Futuristic Gameplay Arcade, Shooter Visual 2D scrolling Perspective Top-down Description Rath-Tha is a vertically-scrolling shoot-'em-up. In the far future the human race built a long tube that absorbed all of the rubbish generated by the planets in the system. T'ufo - a planet notorious for its dirtiness - has sent a rat-shaped ship called...

Atomic Driver (1988)(Loriciels) Platform Amstrad CPC Released Feb, 1988 Published by Loriciels Developed by Loriciels Genre Action, Racing / Driving Gameplay Shooter Perspective Top-down Description You are driving a small car, in a small town where the streets are swamped in atoms. These can be shot and must be avoided. There are power-ups to freeze atoms for a time. There are also barriers in the road, which must be shot, but can't be shot while you are right next to them. The road network is...

Autocrash (1991)(Zigurat Software)(es) Also For DOS, MSX, ZX Spectrum Released 1991 Published by Zigurat Software S.L. Developed by Zigurat Software S.L. Genre Action, Racing / Driving Setting Sci-Fi / Futuristic Gameplay Arcade Visual 2D scrolling Perspective Top-down Description In Autocrash the player competes in a death tournament between "bumper cars". The goal is to dismount the opponent (or opponents) from his car, and hit him before he leaves the game zone. Along the stages,...

Batty (1987)(Hit Pak) Also For iPad, iPhone, ZX Spectrum Released 1988 Published by Encore Developed by Elite Systems Ltd. Genre Action Setting Sci-Fi / Futuristic Gameplay Arcade, Paddle / Pong Visual Fixed / Flip-screen Perspective Side view Description Batty is influenced by Arkanoid 's method of reviving the Breakout phenomenon. You control a paddle at the bottom of the screen, with the top half of the screen containing an arrangement of bricks, most of which can be destroyed. You must move...

Andy Capp (1987)(Mirrorsoft)(fr) Also For Commodore 64, ZX Spectrum Released 1988 Published by Mirrorsoft Ltd. Developed by Blitter Animations Genre Action, Adventure Gameplay Fighting Perspective Side view Description In this game you play the role of Andy Capp, the hard drinking northern layabout from the comic strip in the British newspaper The Mirror . If he doesn't give his new unemployment benefit to his wife, she will leave him - unfortunately he already spent it. So the goal of the game...

Bomb Jack II (1987)(Elite Systems)[cr XOR][t XOR] Also For Commodore 16, Plus/4, Commodore 64, ZX Spectrum Released 1987 Published by Elite Systems Ltd. Developed by Elite Systems Ltd. Genre Action Gameplay Arcade Visual Fixed / Flip-screen Perspective Side view Description Having saved the world in the first game , Bomb Jack is out to collect as much gold as possible, which is lying on a number of ledges. These vary between open and shut - the open ones offer more points, and an extra life is...

Titanic (1988)(Topo Soft)(es) Also For DOS, MSX, ZX Spectrum Released 1988 Published by Topo Soft Developed by Topo Soft Visual 2D scrolling Vehicular Naval / Watercraft Genre Action Setting Sci-Fi / Futuristic Gameplay Platform Perspective Side view Description After developing a new suit for diving in deep waters, Urine and Deepman decide to use it to search for the Titanic. This dive will be useful to test the new suit, but also to find the secrets that are hidden in the lost ship. Fight...

Hold Up (1984)(ERE Informatique)(fr) Platform Amstrad CPC Released Sep, 1984 Published by ERE Informatique Developed by ERE Informatique Genre Action, Racing / Driving Gameplay Stealth Perspective Top-down Description You are a hold-up man driving a fast red car in a French town with narrow streets. The armoured van with bags of money is also somewhere in this town. So you must find it using your radar and collect the money. Gendarmerie (French Police) knows about you and wants to cancel your...

Into Oblivion (1986)(Mastertronic) Released 1986 Published by Mastertronic Ltd. Also For ZX Spectrum Genre Action Vehicular Space Flight Gameplay Shooter Visual Fixed / Flip-screen Perspective Side view Description The player controls a small vehicle, an "Mk II Seeker", which allows for exploration of the various screens. Joystick or keyboard can be used. The player is supplied with a laser beam to destroy various hazardous lifeforms and nine lives. Each screen has a group of three...

Impossamole (1990)(Gremlin Graphics Software) Also For Amiga, Atari ST, BlackBerry, Commodore 64, Jaguar, TurboGrafx-16, Windows, ZX Spectrum Released 1990 Published by Gremlin Graphics Software Limited Developed by Core Design Ltd. Genre Action Gameplay Platform, Shooter Perspective Side view Description Monty Mole has been living in luxury since his previous adventures, but he has now been beamed up by an alien race who want him to do a job for them. Monty must trek through five worlds to...

Kokotoni Wilf (1984)(Elite Systems)[cr NPS][t NPS] Also For Commodore 64, ZX Spectrum Released 1986 Published by Elite Systems Ltd. Developed by Elite Systems Ltd. Genre Action Gameplay Platform, Puzzle elements Setting Sci-Fi / Futuristic Description Kokotoni Wilf has been sent on a bold journey through time, to recover the seven pieces of the Dragon Amulet. There are 63 screens across 6 times zones to trek through in order to find these star-like objects. These screens are viewed from the...

Kick Off (1990)(Anco Software)(M5) Also For Amiga, Atari 8-bit, Atari ST, Commodore 64, NES, ZX Spectrum Released 1989 Published by Anco Software Ltd. Developed by Anco Software Ltd. Genre Sports Sport Football (European) / Soccer Perspective Top-down Description Kick Off was the first football game of its kind, having a top-down view and unlike other football games of that time, the ball was not glued to the feet of the players. Playing Kick Off requires skills in ball control. There is an...

Killapede (1986)(Players Software) Released 1986 Published by Players Software Also For BBC Micro, Commodore 16, Plus/4, Electron Genre Action Gameplay Shooter Perspective Top-down Description Killapede is a shooter based on the arcade game Centipede where you have to shoot a centipede like creature which moves down from the top of the screen left or right before it reaches the bottom of the screen. When a part of the centipede is shot, it will split into two with both parts still advancing...

DESCRIPTION
A collection of emulated games for the Amstrad CPC.
ACTIVITY