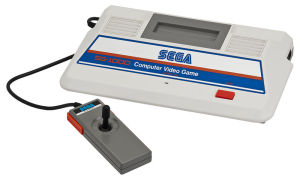 Dumped and discovered in 2011, this is the SG-1000 test cartridge, allowing a multiple set of tests against the SG-1000 for an assembly line. Tests include controller, video, RAM and ports.

Tranquillizer Gun (トランキライザーガン) is a 1980 arcade game developed by Sega for VIC Dual hardware. It has the player control a hunter, who must make his way around a maze shooting animals and dragging their bodies back to his truck. The game was brought to the SG-1000 as Safari Hunting (サファリハンティング) by a then-just founded Compile with slightly updated graphics. It was also included as a minigame within Dynamite Cop .
favoritefavoritefavoritefavoritefavorite ( 1 reviews )

Safari Race (サファリレース) is a racing game for the SG-1000, developed and published by Sega in 1984. The player must drive through various "sections", avoiding wildlife and other cars while making sure not to run out of fuel. The game is notable for using licensed cars, potentially the first video game to do so. The player controls a Lancia Stratos HF, and according to the box art, some of the rival cars are Audi Quattros. The Lancia Stratos would receive greater video game...

Sega Flipper (セガフリッパー) is a pinball game released for the SG-1000 in 1983. In New Zealand it is known as Video Flipper. It was one of the first pinball video games to be released, being released one year earlier than attempts from Jaleco and Nintendo but four years after Atari's Video Pinball . Unlike Video Pinball , however, Sega Flipper makes use of color.

Sega-Galaga (セガ・ギャラガ) is the SG-1000 port of Galaga , and is strangely the only port to receive a name change. The player pilots a starship and must destroy all the on-screen enemies, similar to Space Invaders and Galaxian . However, the enemies in Galaga have the power to steal your ship to use as reinforcements (meaning the player loses a life). However, if you are able to destroy the enemy who has captured your ship, you are able to pilot both ships at once, doubling your...

Serizawa Hachidan no Tsumeshogi for the SG-1000 (芹沢八段の詰将棋), early SG-1000 problem game based on Shogi - aka Japanese chess. Time to confront to a new mystery!

Sindbad Mystery (シンドバットミステリー) is an arcade game developed by Sega for Sega G80 (raster) hardware in 1983. It was ported to the SG-1000 in the same year. It follows a boy named Sindbad who must avoid monsters while piecing together a treasure map, similar to Pac-Man . The game was re-released as part of the Sega Saturn game, Sega Ages Memorial Selection Vol. 2 in 1997.

Space Invaders (スペースインベーダー) is a 1979 milestone arcade game developed by Taito. The player controls a gun which can move left or right, and needs to destroy waves of aliens (or "invaders") before they reach the ground. Space Invaders was brought to a variety of home video game consoles and computers, including the SG-1000 in 1985. Surprisingly the SG-1000 port of the game was one of the most accurate of its time, surpassing the NES and MSX versions which were the...

Space Slalom (スペーススラローム) is a video game developed by Orca and published by Sega for the SG-1000 in 1983. Though on the surface it appears to be a space-themed vertical shoot-'em-up, there is actually no shooting involved. The player controls a shuttle and must navigate it through a course defined by colored stars, similar to ski slaloms. The player must also avoid obstacles, and will be awarded with extra points depending on on his/her speed across the course. At a mere 8kB,...

Star Jacker (スタージャッカー) is a shoot 'em up video game released for Sega System 1 arcade hardware in 1983. Unlike most shoot 'em ups, the player initially controls three space ships, losing one each time the player dies. This means on the first life you will have three times the amount of firepower than on your last. Like Xevious there are two types of weapon - forward lasers for flying enemies and bombs for bases. Star Jacker was ported to the SG-1000 in the same year. Due to the...
favoritefavoritefavoritefavorite ( 2 reviews )

Super Tank (スーパータンク) is a shoot-'em-up game for the SG-1000. The player drives a tank and is tasked with shooting at and destroying enemy units and structures. The SG-1000 was first released to the Japanese market on July 15, 1983. Incidentally, this is exactly the same day that Nintendo's Family Computer was released. The console reached minor success in that market and sold moderately well within Asia until 1985. The system was launched in New Zealand as released by Grandstand Leisure Limited, Australia by John Sands and in other countries, such as France, Italy, Spain, and South Africa. The console in its original form was never launched in North America or the UK.

The SG-1000 is one of Taiwan's first and best-remembered consoles, where it was manufactured and sold (very briskly) under license as "Lou Shi" (阿羅士 Ā Luó Shì). In the same time period from 1983 to 1986, Famicom games were widely pirated as standalone and multi-carts (replete with rudimentary switch banks to select the active ROM), as well as no less than three different pirated versions of the Atari 2600 with boastful monikers characteristic of the times "Adventurer" (冒險家 Màoxiǎn Jiā), "Delight" (賓果 Bīn Guǒ), "Steadfast Creator" (強棒創造者 Qiáng Bàng Chuàngzào Zhě).

A very large thank you is given to SEGARETRO.ORG for descriptions, cover images and screenshots.

Among the most highly-rated cartridges that were released for the SG-1000 include Girls Garden, Sega Galaga, Flicky, Monaco GP and Wonder Boy.