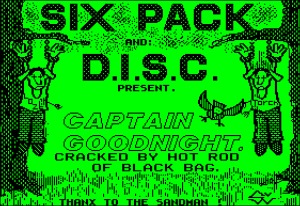 A collection of collections; scene notices and .NFO files, files that would accompany pirated or distributed files, often including information, instructions, or social notes.

A large collection of Scene Notices, from many sources, with conversations, delcaractions and criticisms around piracy scenes. Collected by LSD.

Collection of "Scene Notices", releases of information, news, threats and promises from a wide range of Warez Groups from 2006 to 2010. Most are in the form of .NFO files (text files with some high-bit characters) but many are also images, sounds, and other related materials. Scene Notices are primarily provided to other members of the same Warez communities as warnings or information about quality of releases, troubling trends in copy protection, notification of group changes or...

A collection of roughly 138,000 .NFO Files, gathered from 2000-2004. .NFO files are, generally, files explaining the contents of pirated works. Besides credits from the piracy group and instructions on how to start the programs, these textfiles include news, essays and perspectives from the point of these groups. For ease, there are two versions of this collection in this item: A one-stop download of the entire content, and an unpacked set of the .ZIP files (by month) that contain the...

This is a collection of 493 NFOs I downloaded as a group from a site. They're all gaming ones, and most are from Scene groups.
Topics: archiveteam, gaming, nfo, scene

This is a predb.tgz file of supertorrents database. In the tgz is a sql database of all the release made on the site for 9 years.
Topics: supertorrents.org, archiveteam

A collection of warez scene "nuke" images from 2010 to 2012. A release is considered "nuked" if the community determines the release is of poor quality, contains viruses or malware, or does not meet scene standards
Topics: scene, warez, piracy, nuke

A large collection of Scene Notices, from many sources, with conversations, declaractions and criticisms around piracy scenes. Collected by LSD.

Collection of "Scene Notices", notices between various file-trading groups, insulting other groups, announcing changes in the group, or sending out general public service announcements. To browse the collection, click here .

This package represents hundreds of "Scene Notices", messages of various types between scene groups. Sent over a number of years, these missives include taunts, insults, clarifications, announcements, and commiserations about the various piracy and distribution scenes.

DESCRIPTION
A collection of collections; scene notices and .NFO files, files that would accompany pirated or distributed files, often including information, instructions, or social notes.
ACTIVITY