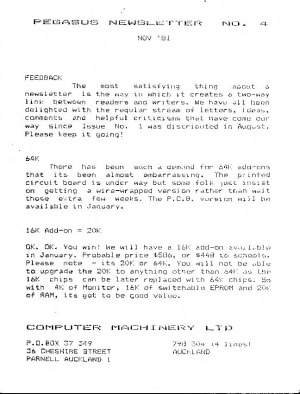 The Pegasus Newsletter is the official Newsletter of the Pegasus brand of computers, made by Computer Machinery, Ltd. of Auckland, New Zealand. Only four issues were produced.

The Aamber Pegasus is a home computer first produced in New Zealand in 1981 by Technosys Research Labs. It is thought that Apple Computers introduction of the Apple II computer into the New Zealand market, and its subsequent heavy educational discounting was the final nail in the coffin for Technosys and the Aamber Pegasus computer. Total production numbers are unknown, but it is thought that less than a hundred units were ever sold.