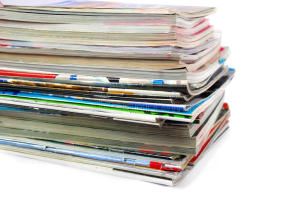 Magazine Packs in the Magazine Racks

The "ideal" for the Internet Archive system is one readable texts item per identifier. However, some users are known to upload entire collections of a given series rather than go through the trouble of making so many individual items. To help make them more readable, copies will be brought into the Archive's stacks, but the original items will still remain. This collection consists of these "mega-pack" items, contributed over years by users.

The BSD Magazine  is a project devoted to *BSD world and Open Source solutions, targeting both beginners and experienced users. It is a free, online monthly publication available to download from our website.  It is a technical magazine, providing articles of interest to all people who want to be an expert in the BSD/UNIX field. It includes highly technical articles, and non-technical articles on Open Source OSes, as well as news on innovations in the field. Our collection of articles are...
Topics: BSD magazine, BSD, magazine, open-source, open source, freebsd, frees

Challenge was a role-playing game magazine published by Game Designers' Workshop between 1986 and 1996. Announced in Journal of the Travellers Aid Society No. 22, the new (at the time unnamed) magazine was going to expand JTAS to a larger format (8.5"×11") and add coverage of GDW's new game Twilight 2000 and other games. The larger size would allow printing of things such as deck plans or sector maps which would not fit in the smaller JTAS format. In order to maintain continuity for...
Topics: Science-Fiction, Gaming, Wargaming

Game Computing was an early eighties multiformat magazine, mainly with type ins, good starter for many a coder back in the day
Topics: games computer magazine, computing high resolution

"Inside Chess" was a bi-weekly American chess magazine started in 1988 by GM Yasser Serawan. It ceased publication in 1990. I have 19 of its old issues which I have scanned and I share here. All are in PDF format with OCR. All ads are removed. I have included 2 short reviews also. Do write in your comments. All its issues are also available in a 3 DVD set. "Born from the rubble of the defunct Player’s Chess News, Inside Chess grew to prominence in a world quite different from...
Topic: chess

Kurmancî is the linguistic magazine, published twice a year since 1987, to spread the results of the Kurdish Instute's inguistic seminars on problems of terminology and standardisation of the Kurdish language. All issues of this periodical are available on the Site, as well as the Kurdish - French - English - Turkish index of the first 20 issues. The first 20 issues, gathered together in a single volume, together with Kurdish - English, Kurdish - French, Kurdish - Turkish indeces as well as...
Topics: kurmanci, kurdish, kurdmanji, kurtce, kurdi, Kurdistan

Linux Journal died on August 7, 2019, because they ran out of operating funds. I put together this comprehensive collection of all the issues published (1994-2019) in PDFs, as well as a siterip of their main site, as well as a mirror of their FTP server. Each part is compressed in a tar.xz archive to prevent people from doing a hit & run on this torrent, and to guarantee that it will be seeded for a long time to come. Hopefully forever. Compressing everything also makes the data size...
Topics: gnu, linux, unix, operating system, OS, terminal, bash, script, programming, hacker, linus...
Source: torrent:urn:sha1:419daab8d2a053b8613ef97c0ec47065e130d5e4

NOURS is the Official NAMCO Game Center Magazine from 1993 to 2006, this collection contains from 1997 issue 16 to 2006 issue 52. While Bandai and NAMCO's combination, NOURS was later  be succeeded by B-NOURS. all scans are download from NAMCO official site (https://www.bandainamcoent.co.jp/corporate/bnours/nours/) and combined to one single pdf in each issue.
Topics: game, namco, arcade game, magazine, game magazine

This is a complete archive of all the eZines put out by the members at NintendoAGE.com. I was the editor for Volumes 8 and 9.
Topics: Nintendo, NES, SNES, Super Nintendo, Virtual Boy, Game Boy, Nintendo 64, Gamecube, Wii, WiiU

DESCRIPTION
The "ideal" for the Internet Archive system is one readable texts item per identifier. However, some users are known to upload entire collections of a given series rather than go through the trouble of making so many individual items. To help make them more readable, copies will be brought into the Archive's stacks, but the original items will still remain. This collection consists of these "mega-pack" items, contributed over years by users.
ACTIVITY