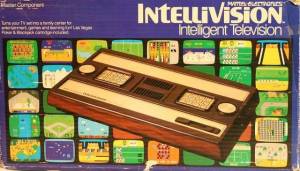 Shark! Shark! is an Intellivision game originally designed by Don Daglow, and with additional design and programming by Ji-Wen Tsao, one of the first female game programmers in the history of video games. The player is a fish who must eat smaller fish in order to gain points and extra lives while avoiding enemies such as larger fish, sharks, jellyfish, lobsters and crabs. After eating a certain number of fish, the player's fish grows in size and is thus able to eat a larger selection of fish....

From Intellvision Lives! : INTELLIVISION CARTRIDGE [#5637] Based on the Data East arcade game Program: Mike Winans, Julie Hoshizaki Graphics: Peggi Decarli Sound: Bill Goodrich CATALOG DESCRIPTION A fast-action chase game as you maneuver your thief through the maze, picking up coins and other treasures. Billy-club swinging cops are in hot pursuit, but you can temporarily escape them by locking gates behind you. The longer you survive, the more valuable the treasures become. One or two players....

Venture is a 1981 arcade game by Exidy. It was ported to a number of home consoles, including the Atari 2600, ColecoVision and Intellivision systems. The goal of Venture is to collect treasure from a dungeon. The player, named Winky, is equipped with a bow and arrow and explores a dungeon with rooms and hallways. The hallways are patrolled by large, tentacled monsters (the "Hallmonsters", according to Exidy) who cannot be injured, killed, or stopped in any way. Once in a room, the...

You play the role of Flynn, who's been zapped into the circuits of the Master Control Program (MCP). The MCP has plans for world domination, and only Flynn can stop it. The ultimate goal of Maze-A-Tron is to disable the MCP. Maze-A-Tron is played in rounds; Circuit Maze and the Master Control Program. You go around the circuit-board styled maze collecting energy for your shields and collecting zeros which are used to clear ("zero") out the onboard RAM. Once you have zeroed all the RAM...

Bomb Squad is a single-player game released by Mattel for the Intellivision console in 1982. The game was one of five released for the console that required the Intellivoice module. The object of the game is to defuse a bomb within a set period of time. When starting the game, the player first chooses the number of digits in the code needed to defuse the bomb and the difficulty level (affecting the number of steps needed to defuse the bomb and the time given to do so). The player can use four...

Utopia is a 1981 strategy video game by Don Daglow released for the Intellivision and Mattel Aquarius. It is often regarded as among the first sim games and god games and credited with having set the scene for the real-time strategy genre. Utopia is a two-player game without an AI opponent, although a single player can play to achieve a high score and ignore the other island. When starting the game, the players may choose how long each turn lasts (60 seconds being the default), and how many...

Intellivision: King of the Mountain (1982)(Mattel)

INTELLIVISION CARTRIDGE [IMAGIC #700023] Design/Program: Rick Levine Sound: Dave Durran CATALOG DESCRIPTION (Imagic Numb Thumb News Vol. 2, 1983) Ride your rig to the four corners of the USA! Deliver the goods on a tight schedule. Make strategic decisions about what cargoes to carry and which routes to take. Radio ahead. Find out what loads are needed, and where. Then power down that ribbon of highway. Keep an eye peeled for turnouts - and for other truckers! You've got to get where you're...

Zaxxon is a 1982 isometric shooter arcade game developed and released by Sega. Some sources claim that Japanese electronics company Ikegami Tsushinki also worked on the development of Zaxxon. The game gives the player the experience of flying a fighter craft through a fortress while shooting at enemy entities (missiles, enemy gunfire, etc.) The object of the game is to hit as many targets as possible without being shot down or running out of fuel—which can be replenished, paradoxically, by...

"Song Player" is a demonstration program for the Intellivision, designed and programmed by Joseph Zbiciak. The Song Player cartridges automatically begin playing a three-voice orchestration of popular songs, with no other user interaction. They primarily function to demonstrate sound, and show basic graphics to indicate the notes being played. This cartridge plays the song "I'm Too Sexy" by Right Said Fred.

Sea Battle is a multiplayer strategy game released by Mattel for its Intellivision video game system in 1980. In the game, players command fleets of naval vessels attempting to invade the harbor of their opponent. It was designed by Ken Smith for Mattel. In Sea Battle, players must successfully invade the home port of their opponent while protecting their own ports from invasion. Game play takes place in an island-dotted ocean, with one player's home port at the lower-left corner of the screen...

Blockade Runner was a game for the Intellivision designed by Steven Willey. From a 1983 advertisement: Blockade Runner is a great visual concept in video games - play by yourself or team with a friend to bring home to earth four ships loaded with vital supplies. Enemy aliens have blockaded your route, so you must flash through a mine-filled asteroid belt to avoid destruction. You steer and shoot from your ship's nose-cone command post as the universe rushes past your eyes! From a review by Mike...

The Intellivision was developed by Mattel Electronics, a subsidiary of Mattel formed expressly for the development of electronic games. The console was test marketed in Fresno, California, in 1979 with a total of four games available, and was released nationwide in 1980 with a price tag of US$299 and a pack-in game: Las Vegas Poker & Blackjack. Though not the first system to challenge Atari, it was the first to pose a serious threat to Atari's dominance. A series of advertisements featuring George Plimpton were produced that demonstrated the superiority of the Intellivision's graphics and sound to those of the Atari 2600, using side-by-side game comparisons.

Like Atari, Mattel marketed their console to a number of retailers as a rebadged unit. These models include the Radio Shack TandyVision, the GTE-Sylvania Intellivision, and the Sears Super Video Arcade. The Sears model was a specific coup for Mattel, as Sears was already selling a rebadged Atari 2600 unit, and in doing so made a big contribution to Atari's success.

In its first year, Mattel sold 175,000 Intellivision consoles, and the library grew to 35 games. At this time, all Intellivision games were developed by an outside firm, APh Technological Consulting. The company recognized that what had been seen as a secondary product line might be a big business. Realizing that potential profits are much greater with first party software, Mattel formed its own in-house software development group.

The original five members of that Intellivision team were manager Gabriel Baum, Don Daglow, Rick Levine, Mike Minkoff and John Sohl. Levine and Minkoff, a long-time Mattel Toys veteran, both came over from the hand-held Mattel games engineering team. To keep these programmers from being hired away by rival Atari, their identity and work location was kept a closely guarded secret. In public, the programmers were referred to collectively as the Blue Sky Rangers.

By 1982, sales were soaring. Over two million Intellivision consoles had been sold by the end of the year, earning Mattel a $100,000,000 profit[citation needed]. Third-party Atari developers Activision, and Imagic began releasing games for the Intellivision, as did hardware rival Coleco. Mattel created M Network branded games for Atari and Coleco's systems. The most popular titles sold over a million units each. The Intellivision was also introduced in Japan by Bandai in 1982.

The original 5-person Mattel game development team had grown to 110 people under now-Vice President Baum, while Daglow led Intellivision development and top engineer Minkoff directed all work on all other platforms.