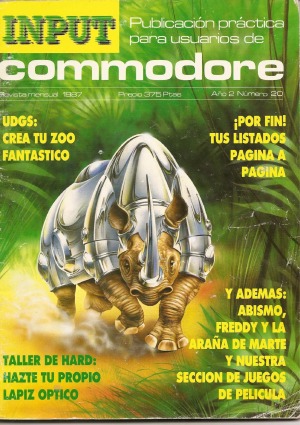 Input was published by Marshall Cavendish in the United Kingdom during 1984 and 1985, covering the subject of home computer programming.

It was composed of 52 weekly editions which introduced several parallel themes (such as computer graphics, word processing, CAD, games etc) in each edition. These themes then were slowly developed with each new edition into BASIC and assembly language programs. The resulting programs were intended to run on a selection of the most popular home computers in the UK at the time: the Sinclair ZX Spectrum, Commodore 64, BBC Micro, Acorn Electron and Dragon 32. A subset of the programs were also suitable for the Sinclair ZX81, Commodore VIC-20 and Tandy TRS-80 Color Computer. The magazine was well-known among hobbyists using these early computer architectures, since it provided a useful source of interesting programs in a wide range of themes. As was usually the case in home computer magazines of the era, the programs were listed in the pages of the magazine, and readers had to type them manually into their computers.