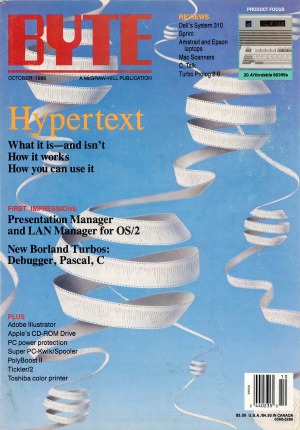 With the re-branding of computing power and machines as something welcome in the home and not just the workshop, a number of factors moved forth to sell these machines and their software to a growing and large group of customers. Besides the introduction of more elegant cases and an increased presence by larger and larger firms, a strong argument can be made that one of the forces was the proliferation of computer-related magazines and newsletters that gave a central, printed home for writing ab...

Hacker Journal is the first italian magazine dedicated to hacking. It can be bought at the news-stands since 2002. Hacker Journal is a magazine which combines computer security articles and others where are explained the main techniques of computer attack. Articles are structured as tutorial which show step by step, and with the help of the support code, how to realize exploits and the most common intrusion techniques (attack side) and how to prevent the attack (defense side). We cooperate with...

Computer is an IEEE Computer Society practitioner-oriented magazine issued to all members of the society. It contains peer-reviewed articles, regular columns, and interviews on current computing-related issues. The magazine can be categorized somewhere between a trade magazine and a research journal, drawing on elements of both. Computer provides information regarding current research developments, trends, best practices, and changes in the computing profession. Subscriptions of the magazine...

Amtix! magazine was, as its subtitle stated, a "monthly software review for the Amstrad computers". Published by Newsfield Publications Ltd in the mid eighties. Amtix! ran from November 1985 to April 1987 and produced 18 issues in total. A special issue (Issue zero) was given away with Zzap!64 and CRASH, two of Newsfield's other publications. After issue 18, the title was merged with Computing With The Amstrad magazine and the Amtix! logo appeared in CWTA's games review section.

Tux Magazine was a Linux magazine aimed at Linux desktop end users, specifically those who use the KDE desktop environment. Tux's mission was to help Linux take over the desktop market. Tux was not a print magazine: each issue was delivered digitally as a PDF file. The first issue was published in March 2005 and further 19 issues followed almost every month. On January 1, 2007, the publisher announced that the December 2006 issue was the last for the moment, because financial and other issues...

Magazines about the Sinclair family of computers, including the ZX Spectrum, Timex Sinclair, QIL, and other models.

This magazine is dedicated to the curious people who want to know the "inside" technical information regarding computers, BBS's, the telephone company, arcade games, radio equipment, general electronic equipment, cable and other utility companies and anything/everything nobody else wants to talk about... or might not even KNOW about! Are you a hacker? Are you curious? Do you want to know how-it-works? Then you want to read this magazine!

CD Interactief is a glossy magazine that was published in the Netherlands in the 1990s.

UNIX Review &nbsp;was an American magazine covering technical aspects of the&nbsp; UNIX &nbsp;operating system and C programmer . Recognized for its in-depth technical analyses &nbsp;the journal also reported on industry confabs and included some lighter fare. It was founded in 1983. In 1985 it was acquired by Miller Freeman. The journal was renamed to UNIX Review's Performance Computing (UR/PC) Magazine with the April 1998 issue, and ceased publication in 2000. The on-line...

Popular Electronics continued with a full range of construction projects using the newest technologies such as microprocessors and other programmable devices. In November 1982 the magazine became Computers & Electronics. There were more equipment reviews and fewer construction projects. One of the last major projects was a bidirectional Analog to Digital converter for the Apple II computer published in July and August 1983. Art Salsberg left at the end of 1983 and Seth R. Alpert became...

INPUT Magazine is a Spanish-language magazine published in the 1980s in Brazil and covering apple and other microcomputer news for around 80 issues.

CompuServe (CompuServe Information Service, also known by its acronym CIS) was the first major commercial online service in the United States. It dominated the field during the 1980s and remained a major player through the mid-1990s, when it was sidelined by the rise of services such as AOL with monthly subscriptions rather than hourly rates. Since the purchase of CompuServe's Information Services Division by AOL, it has operated as an online service provider and an Internet service provider....

The Micro User (titled BBC Micro User in the first three issues) was a British specialist magazine catering to users of the BBC Microcomputer series, Acorn Electron, Acorn Archimedes and, to a limited extent, the Cambridge Z88. It had a comprehensive mix of reviews of games, application software, and the latest Acorn computers; type-in programs (duplicated on a "cover disk" which was available separately), a correspondence page offering help with computer problems, and approachable...

Kaypro Corporation, commonly called Kaypro, was an American home/personal computer manufacturer of the 1980s. The company was founded by Non-Linear Systems to develop computers to compete with the then-popular Osborne 1 portable microcomputer. Kaypro produced a line of rugged, portable CP/M-based computers sold with an extensive software bundle which supplanted its competitors and quickly became one of the top selling personal computer lines of the early 1980s. While exceptionally loyal to its...

Personal Computer Games was a multi-format UK computer games mag of the early/mid eighties. It is famous for launching the careers of several notable games journalists of the '80s including Bob Wade, Peter Connor and Chris Anderson. Anderson would later launch Amstrad Action, and Future Publishing, along with Wade and Connor. Other staff included Deputy Editor Steve Cooke and staff writer Samantha Nemens. Computer coverage at the time were mainly consisted of the Spectrum, C64 and the BBC...

Let's Compute! was a magazine for the CPC Amstrad, BBC Micro, Commodore, Atari ST, and other computers of the 1980s.

Pertec Computer Corporation (PCC), formerly Peripheral Equipment Corporation (PEC), was a computer company based in Chatsworth, California which originally designed and manufactured peripherals such as floppy drives, tape drives, instrumentation control and other hardware for computers. Computer Notes is the MITS/Pertec publication used to communicate technical information, sales information, and news to Altair users and enthusiasts.

HARDCORE was the Journal of the British Apple Systems User Group. It was a computer newsletter published in the 1980s and dedicated to the Apple family of computers.

Acorn Programs Magazine is a glossy magazine covering the BBC Acorn and Acorn software. It was published in 1984.

K-Power described itself as "The Magazine for the Computer Generation". It was a computer magazine with an emphasis on education, published in the United States by Scholastic, Inc and edited by Anne Krueger. 8 issues of K-Power were published, running from February to November/December 1984, after which it was merged with Family Computing and became a teen-oriented insert of its parent magazine. K-Power featured type-in BASIC programs for many different platforms, perhaps most fondly...

NewTekiques was an Amiga magazine published by Amiga vendor NewTek in the late 1990s.

H&E Computronics, Inc. was well known for their line of business software for the TRS-80 and other computers, including programs such as VersaReceivables and VersaLedger. But they were probably best known for their TRS-80 monthly magazine, which billed itself as "the original magazine for TRS?80 owners." It was called by a number of different names over its publication history, including TRS?80 Monthly Newsletter, TRS?80 Monthly Magazine, and H&E Computronics Monthly News...

The official magazine of Compuserve.

Microhobby Magazine was a Spanish-language magazine covering the ZX Spectrum and other microcomputers. It was published from the 1980s to the early 1990s.

MSX World is a Spanish-Language magazine dedicated to the MSX computer, published in the 1980s.

Magazines about the computers made by Atari: 8-Bit, ST, and Related.

A varied collection of Texas Instruments-related computer magazines, to be split off into further collections as more individual issues are found.

CE Lifestyles Magazine targets digital electronics enthusiasts and avid computer users who like all things digital. Each issue of CE Lifestyles includes hardware reviews, buying advise, and tutorials for getting started on a broad range of devices. CE Lifestyles provides all-around gadget hounds with the latest advancements in computer electronics.

Microkids was one of a handful of magazines that had emerged in the early 80s with a focus on family members as it’s audience, in this case tweens and teens. Other slicks of the day included titles such as Family Computing and Enter, magazines that made their way to the racks as a result of a newly growing global demand for personal computers. No longer was it only hobbyists and programming professionals who showed an interest in this developing technology. Now there was a smattering of...

Metamorphosis Magazine/Newsletter was a publication dedicated to the TRS-80, OS-9, and other related families of computers.

Not to be confused with the workworking magazine of the same name, Workbench was a newsletter by the Amiga Users Group of Australia covering Amiga-related subjects and news.

ELBUG Magazine is the newsletter for the BBC Micro published by BEEBUG Publications published in the UK in the 1980s.

CPU Newsletter: The Magazine for Commodore 64/128 8-Bit Enthusiasts (Published in the late 1990s)

Softgold Magazine, Publisher: Goldsoft. The Softgold Magazine was published in Australia from at least 1987 into 1988. Its contents were mainly software with a few reviews and general purpose computing articles thrown into the mix. Sometime in 1988 it turned into a MS-DOS only magazine with the CoCo contents moved to the Australian CoCo Magazine (a sister publication). It is unknown when the magazine started or ended its publication.

Input was a partwork published by Marshall Cavendish in the United Kingdom during 1984 and 1985, covering the subject of home computer programming. Input was composed of 52 weekly editions which introduced several parallel themes (such as computer graphics, word processing, CAD, games etc.) in each edition. These themes then were slowly developed with each new edition into BASIC and assembly language programs. The resulting programs were intended to run on a selection of the most popular home...

The Guide to Computer Living was a magazine dedicated to Commodore computers that was published in the 1980s.

MSX Fan Magazine was a French computer magazine covering the MSX Computer and published in the 1990s.

Input/Output Magazine was an Atari-focused magazine published in the 1980s.

Acorn Programs Magazine is a glossy magazine covering the BBC Acorn and Acorn software. It was published in 1984.

The BeeBon was a newsletter dedicated to the BBC Micro and Acorn Computing machines. Published in 1982.

Laserbug Magazine was a newsletter covering the BBC Model B computer. Short-lived, only a small number of issues were produced.

MSX Top Class is a british MSX magazine published in 1993.

Magazines about Tandy Computers, including the TRS-80, Color Computer, and other Tandy devices.

Under Color Newsletter was a bi-weekly newsletter published in support of the Tandy Color Computer (Coco).

Magazines dedicated to the IBM PC / Windows / DOS family of computers and compatibles.

Dragon World, an official publication from Dragon Data. Followed up where Stop Press left off.

DESCRIPTION
With the re-branding of computing power and machines as something welcome in the home and not just the workshop, a number of factors moved forth to sell these machines and their software to a growing and large group of customers. Besides the introduction of more elegant cases and an increased presence by larger and larger firms, a strong argument can be made that one of the forces was the proliferation of computer-related magazines and newsletters that gave a central, printed home for writing about computers. Rising from user support groups, computer companies themselves, and publishing houses willing to risk cash and time to fund them, these magazines set the stage for the home computer revolution.

This collection consists of dozens of magazine runs, digitized from fading piles of older magazines by an army of anonymous contributors. In some cases, quality is variant, due to the rareness of the issues. Special thanks and recognition are given to sites bombjack.org, atarimagazines.com.