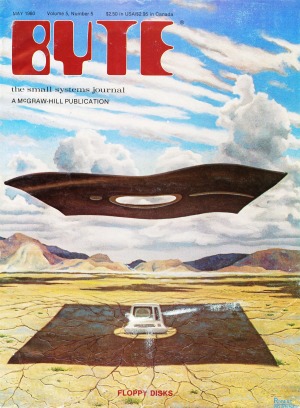 Byte magazine was a microcomputer magazine, influential in the late 1970s and throughout the 1980s because of its wide-ranging editorial coverage. Whereas many magazines from the mid-1980s had been dedicated to the MS-DOS (PC) platform or the Mac, mostly from a business or home user's perspective, Byte covered developments in the entire field of "small computers and software", and sometimes other computing fields such as supercomputers and high-reliability computing. Coverage was in-depth with m...

DESCRIPTION
Byte magazine was a microcomputer magazine, influential in the late 1970s and throughout the 1980s because of its wide-ranging editorial coverage. Whereas many magazines from the mid-1980s had been dedicated to the MS-DOS (PC) platform or the Mac, mostly from a business or home user's perspective, Byte covered developments in the entire field of "small computers and software", and sometimes other computing fields such as supercomputers and high-reliability computing. Coverage was in-depth with much technical detail, rather than user-oriented.

Byte started in 1975, shortly after the first personal computers appeared as kits advertised in the back of electronics magazines. Byte was published monthly, with an initial yearly subscription price of $10. Byte was able to attract advertising and articles from many well-knowns, soon-to-be-well-knowns, and ultimately-to-be-forgottens in the growing microcomputer hobby. Articles in the first issue (September, 1975) included Which Microprocessor For You? by Hal Chamberlin, Write Your Own Assembler by Dan Fylstra and Serial Interface by Don Lancaster. Advertisements from Godbout, MITS, Processor Technology, SCELBI, and Sphere appear, among others. Early articles in Byte were do-it-yourself electronic or software projects to improve small computers. A continuing feature was Ciarcia's Circuit Cellar, a column in which electronic engineer Steve Ciarcia described small projects to modify or attach to a computer (later spun off to become the magazine Circuit Cellar, focusing on embedded computer applications). Significant articles in this period included the "Kansas City" standard for data storage on audio tape, insertion of disk drives into S-100 computers, publication of source code for various computer languages (Tiny C, BASIC, assemblers), and breathless coverage of the first microcomputer operating system, CP/M. Byte ran Microsoft's first advertisement, as "Micro-Soft", to sell a BASIC interpreter for 8080-based computers.

In spring of 1979, owner/publisher Virginia Williamson sold the magazine to McGraw-Hill. She remained publisher until 1983, about 8 years after founding the magazine, and subsequently became a vice president of McGraw-Hill Publications Company. Shortly after the IBM PC was introduced, in 1981, the magazine changed editorial policies. It gradually de-emphasized the do-it-yourself electronics and software articles, and began running product reviews, the first computer magazine to do so. It continued its wide-ranging coverage of hardware and software, but now it reported "what it does" and "how it works", not "how-to-do-it." The editorial focus remained on any computer system or software that might be within a typical individual's finances and interest (centered on home and personal computers). From 1975 through 1986 Byte covers usually featured the artwork of Robert Tinney. These covers made Byte visually unique. In 1987 Tinney's paintings were replaced by product photographs, and Steve Ciarcia's "Circuit Cellar" column was discontinued.

Around 1985 Byte started an online service called BIX (Byte Information eXchange) which was a text-only BBS style site running on the CoSy conferencing software, also used by McGraw-Hill internally. Access was via local dial-in or, for additional hourly charges, the Tymnet X.25 network. Monthly rates were $13/month for the account and $1/hour for X.25 access. Unlike CompuServe, access at higher speeds was not surcharged. Many of the Byte staff were active on the service. Later, gateways permitted email communication outside the system.

Byte continued to grow. By 1990 it was a monthly about an inch in thickness, a readership of technical professionals, and a subscription price of $56/year, a high figure for the time. It was the "must-read" magazine of the popular computer magazines. Around 1993 Byte began to develop a web presence. It acquired the domain name byte.com and began to have discussions and post selected editorial content. It developed a number of national sister editions in Japan, Brazil, Germany, and an Arabic edition published in Jordan.

The readership of Byte and advertising revenue were declining when McGraw-Hill sold the magazine to CMP Media, a successful publisher of specialized computer magazines in May 1998. The magazine's editors and writers expected its new owner to revitalize Byte but CMP ceased publication with the July 1998 issue, laid off all the staff and shut down Byte's rather large product-testing lab.

If you notice any inconsistencies or can provide missing issue descriptions / metadata, please contact Famicoman[at]gmail[dot]com