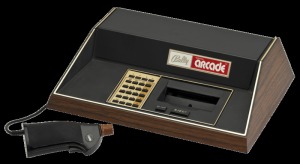 Virtually a Pac-Man clone, Muncher incorporates a little of everything from its seed of inspiration, from the layout of the original maze, to the power-pellets, to the ghostly enemies, all found in the original Pac-Man .
favoritefavoritefavorite ( 2 reviews )

To read the manual for this game, click here . GALACTIC INVASION 2011. Alien ships come at your missile launcher from every direction. They peel off from their formation singly or in groups of twos or threes. The more aliens you destroy, the more of their reinforcements attack. Each ship is piloted by a highly skilled captain capable of maneuvering with incredible agility. Realistic sounds add to the intensity. Up to 4 players. Aim your missiles at the alien ships and score points for each one...
favoritefavoritefavoritefavorite ( 1 reviews )

Click here to view the manual to this game. Four challenging courses in race car driving excitement! Jockey for position at Le Mans or go for broke on a dangerous rally track! There's a constant trade-off between speed and maneuverability! Varying skill levels upgrade the challenge and the fun. Here is all the excitement of formula-style racing! The competition gets hotter as players improve their skills! 1 or 2 players.
favoritefavorite ( 1 reviews )

Click here to view the manual to this game. This dual-game cartridge includes two varieties of Breakout : Brickyard , an almost pixel for pixel translation of the game, and Clowns , a game involving the use of a see-saw and two clowns jumping on either end, collecting items in midair.

Click here to view the manual to this game. Football is a sports game for 2 or 4 (2 vs. 2) players. The offensive team can choose between different plays, and can use the controller to adjust the quarterback's arm to change the angle at which the ball is thrown.

Click here to view the manual to this game. COSMIC RAIDERS 2019 In deep space lies the alien sector Larkin. You are there on a mission to obtain energy sources that have been seized by the evil Larkins. Radar and a superior guidance system help you avoid attacking fighters and Kamikaze ships. The energy stars are near the Larkin command ship: you must retrieve them before you can leave the enemy sector. COSMIC RAIDERS (1-4 players) An evil force, LARKIN, is attacking your base planet. In every...

Click here to view the manual to this game. Three all-time card game favorites! The computer stakes you to a thousand dollars and then it's either "get rich quick" or "down the tubes." Authentic 52 card action! For example, in Blackjack you can double down or split, and five cards under 21 is an automatic winner. The computer does the dealing and keeps track of the money. Up to 4 players.

To read the manual for this game, click here . 280 ZZZAP/DODGEM 2001: Two different high-speed car races demand quick response and raw courage. Enter your racing time into the computer - floor the accelerator - and go for speed and distance. 280 Zzzzap challenges you to hold a road filled with dangerous hairpin turns! Dodgem puts you up against other cars driven by the computer. The sharper your driving skills, the more mileage you'll get.

Click here to view the manual to this game. A version of BASIC for the Balley Astrocade. Write BASIC programs that run on the console!
favoritefavorite ( 4 reviews )

Click here to view the manual to this game. Amazing Maze is a randomly-generated maze game with three difficulties, Easy, Medium, and Hard, where one player races to complete the maze faster than another human player, or against the CPU. Tic-Tac-Toe is an electronic version of the classic game.

To read the manual for this game, click here . Dog Patch is a two-player Skeet-Shoot type game in which players accumulate points by bouncing the target can between each player.

To read the manual for this game, click here . Square off for an exciting duel of skill and cunning as you plan and carry out the destruction of your opponent. Check the wind, make critical adjustments to barrel angle and powder charge, and fire. The final explosion leaves no doubt as to the winner. Random terrains ensure that every game is different! A fantastic party game that's absolutely addictive for 2 players or teams. After a random terrain is drawn and the soldiers install the gun...

Click here to read the manual for this game. Congratulations! You have just stepped into the world of Machine Language. No longer are the secrets of fast graphics and infinite program control held out of your grasp. But let's not be hasty! For along with this new found flexibility comes additional responsibilities and tedious frustrations you may not have experienced before. So, before we get too far along let me say a few words about who this new cartridge is aimed at. You may have been aware...
( 1 reviews )

Click here to view the manual to this game. Panzer Attack is a tank battle game for two to four players. Each player controls a single tank maneuvering through an arena filled with walls that obstruct movement and fire. The arena is viewed from an overhead perspective like that used in Combat on the Atari 2600. Red Baron is a two player game of air combat between two World War One biplanes. The object of the game is to see how many times you can shoot down the other player before time runs out....

Click here to view the manual to this game. Three different games will improve your vocabulary and reinforce spelling skills. Letter Match ! Pair letters randomly selected by the computer. Spell 'N Score ! Create as many words as you can from letters generated at random by the computer. Crosswords ! The computer gives you letters. You turn then into words. 1 or 2 players.