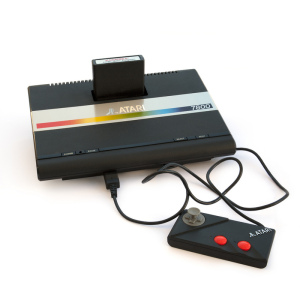 Programs that play or wrrite music on the Atari 7800. The vast majority have no video component.

Hacks, Homebrews and Modifications of the Atari 7800 by the vintage community over the years.

Click here to read the manual for this game. Asteroids is a conversion of the arcade game of the same name. Play the role of a spaceship pilot trapped in a gigantic asteroid cloud and pulverize incoming asteroids with the ship's photon cannon. When all asteroids are destroyed, the player can then move on to the next round. In addition to the asteroids, the player will also face an Alien Robot Saucer which shoots randomly across the screen. The player using the controller may rotate the ship...
favoritefavoritefavoritefavorite ( 5 reviews )

Click here to read the manual for this game. Tank Command is a vertically scrolling action game. You control a tank on a mission to capture the enemy flag as well as earn as many points as possible. To do this, you will need to blast your way through their defenses on three levels of increasing difficulty. Blocking your progress are enemy tanks, pillboxes, missiles, jeeps, infantry, huts, and more, all of which earn you points when destroyed. Your tank is equipped with a limited amount of fuel...
favorite ( 1 reviews )

Click here to read the manual for this game. Dig Dug is a 1-2 player arcade game in which you have to use your shovel to dig your way through the earth. Stopping you from doing this are two monsters, called Pooka and Fygar, who will continually chase you around. The only weapon that you carry is an air pump, which you can use to inflate the monsters to the point where they explode. (if you start to inflate them but stop doing so, the monsters will get turned back to their normal selves.)...

Click here to read the manual for this game. Another in the series of Epyx Olympic sports games. Compete in many different sporting events like: Ski Jump, Hot Dog, Biathlon, Bobsled, Free Skating, Figure Skating and more.

Click here to read the manual for this game. A conversion of the arcade game of the same name, which itself is loosely based on a movie, Kung-Fu Master is a side scrolling action game for one or two players, who alternate turns. Mr. X has captured the pickpocket Sylvia and it is up to Thomas, a kung-fu master who owns a restaurant, to get her back. She is located on the top floor of Mr. X's castle and Thomas will need to fight his way to the top. Of course, this won't be easy as each floor has...

Click here to read the manual for this game. Galaga is a vertical arcade shooter from Namco. You control a space fighter at the bottom of the screen, scrolling left and right in order to avoid oncoming bombs and kamikaze attacks from alien invaders--and to fire your own missiles to fight back! There are an infinite number of stages to progress through. Every third level is a "challenge stage" in which you have a free chance to shoot as many aliens as possible and rack up bonus points....

Click here to read the manual for this game. George, Lizzy and Ralph were just ordinary Americans, until an experiment went wrong, turning them into a Gorilla, Lizard and Werewolf respectively. Following this, the three of them plan to go round destroying buildings, and up to 3 human players can join in. Smashing at the edges of the buildings for long enough will make them collapse. The police and military are after you, and will shoot at you, so try to destroy them (failing that, you can avoid...
favoritefavoritefavorite ( 1 reviews )

Click here to read the manual for this game. Mario and Luigi, the best plumbers in the world, have a real job on their hands. A host of characters have taken over the sewers, and the brothers must clear them out of the pipes. The platform puzzle which first introduced Luigi to the world has both single and multiplayer action with two differing game types, but with the same objective. Crabs, turtles and fighter flies must be cleared out by jumping underneath the platform they sit on, then...
favoritefavoritefavoritefavorite ( 1 reviews )

Click here to read the manual. A hundred thousand years ago, an ancient civilization prospered on our Earth, their product being GAMP (General Artificial Matrix Producer). In order to survive the Ice Age, most of the Earth's inhabitants have decided to leave it, finally settling on a planet called Xevious. A group of humans remained, becoming our own ancestors. Many years have passed, and the Xevians are now planning a massive comeback to their long-lost homeland. The pilot Mu, his android...

Set in a post-apocalyptic New York, Double Dragon is the story of Billy and Jimmy Lee, twin brothers trained in the fighting style of Sou-Setsu-Ken. Together, they manage a small martial arts training school, teaching their students in self-defense. One day, Billy's girlfriend, Marian, is kidnapped off the street by the "Black Warriors", a savage street gang led by a man named Willy. The Black Warriors demand the Lee brothers disclose their martial arts secrets in exchange for... A victim of unfortunate timing, the 7800 was released shortly before the great video game crash of 1983. Re-launched by Atari in 1986 as a competitor to the Nintendo Entertainment System and Sega Master System, the Atari 7800 was backwards compatible with original Atari 2600 titles.

In 2009, IGN chose the 7800 to be their 17th best video game console of all time. They justified this relatively low ranking (though higher than every other Atari console save the 2600) with the summary statement: "Its delayed release, its cancelled peripherals, and a lack of financial backing from the company's new owners all combined to ensure that Atari 7800 would never see any success beyond being a sexier way of playing Atari 2600 titles."

Atari was hampered by exclusive rights-publishing agreements many game publishers had signed with Nintendo, meaning popular games released on the NES could not be released on competing systems such as the 7800 until two years later. An expansion port was included on the original Atari 7800 system. Designed for a planned computer keyboard, connection to laser disc players, or other expansion usage, the port was removed in later hardware revisions and never used. Fewer than 100 Atari 7800-specific titles were released.

Several key factors influenced the design of the 7800. First, Atari had been facing mounting pressure from the ColecoVision, which boasted graphics that more closely mirrored arcade games of the time than Atari’s reigning 2600 VCS system. Second, the Atari 5200 (the original intended successor to the Atari 2600 VCS) had been widely criticized for not being able to play Atari 2600 VCS games without an adapter.

The Atari 7800 was the third generation of the Atari consoles, and has the best graphics, but fewest games.

Through use of the JSMESS emulation system, the following cartridges are playable at the Internet Archive.

These cartridges are currently viewable only as image and video presentations at the request of Atari, Inc.