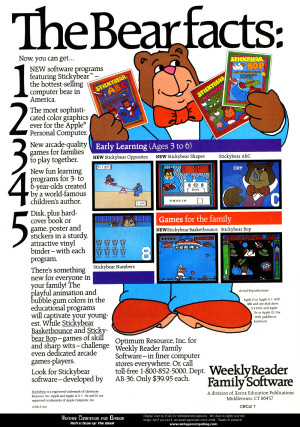 Educational software for the Apple II.

Factactics is a trivia game for one to two players. Categories include movies, music potpourri, rock & roll, sports, television, Americana, and "the big mix." The game displays a trivia question and players have an opportunity to buzz in. If no player buzzes in the game will then display the answer with the letters re-arranged as a hint.

Now counting and number recognition are as easy as 1, 2, 3! Colorful groups of bug, moving objects- trucks and ducks, birds and bears, and lots more- reinforce numbers and counting skills. Each time a number of the keyboard is pressed, a new set of objects is displayed on the screen with the corresponding numeral. You can use the space bar to learn to count up and down. When the space bar is pressed, the next number and objects appear on the screen. The many possible picture combinations work...
Topics: Educational, Basic Math

Jungle Book side B

Apple II Library: Educational
Where in the USA is Carmen Sandiego disk 1
software

Where in the USA is Carmen Sandiego disk 1

Where in Time is Carmen Sandiego disk 1

Ticket to Washington DC side A

Your goal is to win as many points as you can by catching colorful, bouncing, falling objects- including bricks, donuts, and stars- before running out of baskets. While trying to accumulate points, you must duck falling objects and dodge moving ground obstacles that try to rip you. Keep score on the computer to see which player's on top! New obstacles and falling objects in each successive round require more and more skill in order to score. The rounds increase in difficulty as you progress...

Jungle Book side A

Apple II Library: Educational
An Apple for the Teacher (1983)(Wadsworth)
by Wadsworth
software

This program originally accompanied the book An Apple for the Teacher: Fundamentals of Instructional Computing. The program includes example and demonstration programs which are unfortunately only good as a curiosity without the accompanying book.

Grammar Mechanics side A (clean crack)

Learning with Fuzzywomp includes four modules to prepare kids for reading, writing, and math. Bubble Up - The numbers one through nine float out of a hat and the player must shoot them in the proper order. Juggling Clown - The clown displays a number and you must roll that number of balls down. Domino Match - A domino is shown to the player. The player must then choose the same domino from the board. Make-a-Monster - Create a monster from selecting three different parts of the body and then...
Topics: Educational, Early Learning

Apple II Library: Educational
Where in the World is Carmen Sandiego side A
software

Where in the World is Carmen Sandiego side A

MasterType - Training Ground is the first disk included with MasterType - The Typing Instruction Game. This disk includes lessons and basic drills to prepare you for the full game.
Topics: Educational, Typing

Apple II Library: Educational
Where in the World is Carmen Sandiego side B
software

Where in the World is Carmen Sandiego side B

Spelling Grade 3 side A

Match Maker - French provides extensive vocabulary drill for use in all French I courses. It includes 98% of the standard vocabulary. There is room to add additional vocabulary to tailor the program to specific individual needs.
Topics: Educational, French Language

Spell It! is a single player game which helps you learn how to spell words. The game begins by showing you a list of the 10 words you are going to be quizzed on spelling. Then as the game advances each word is shown to you again and you re-type the word with the correct spelling.
Topics: Educational, Language Arts

You are a famous crimebuster hot on the trail of that world-renowned thief, Carmen Santiago, and her latest gang. The rumours that she had died in a bizarre accident don't deter you; after all, it might just be misdirection. So you track her to the Dark Woods of I/O Error, where you encounter three hideous beasts and lose your way in the night. Virgil, a Greek poet, meets you in your frenzy and tells you that the only way out is through Hell itself. "Alas," he continues, "the...
Topics: edutainment, Dante's Inferno

Now kids can practice basic math skills and help the Stickybear family out of some sticky jams at the same time. It's simple - for every set of addition and subtraction problems youngsters get right, Stickybear gets a step closer to getting out of a jam. Get enough problems right and Stickybear gets out of one jam... but into another... And kids practice skills at a pace that's just right for them... because Stickybear Math, the computer automatically advances when the child is ready to try...
Topics: Educational, Basic Math

Algebra Volume 4 continues to build upon what was learned in the first three Algebra tutorials from Edu-Ware. This volume includes an introduction to graphing, linear equations, variation, solving systems of linear equations, and inequalities. Each section includes a post test and there is a final test which combines all of the material.
Topics: Educational, Algebra

The Internet Archive Software Library is a large collection of viewable and executable software titles, ranging from commercially released products to public domain and hobbyist programs. Using the JSMESS emulator, users can "boot up" an emulation of the given title and use it in their browser. More titles are added frequently, and users are encouraged to donate newly found floppy disk images and programs.