>> john warner who served as u.s. senator for 30 years has died. he was a former chairman of the senate armed services community and retired from the senate in 2008. next we will hear from tributes from senate majority leader chuck schumer and mitch mcconnell and virginias current senators tim kaine and mark warner. mr. president. the presiding officer: the majority leader. surely schumer well, we were greeted this morning by some very sad news, that our former colleague, senator john warner of r, of virginia, had had passed away at the age of 94. a five-term senator, he was a consensus builder, authority on military affairs, one of the last world war ii veterans to serve in this chamber and he
12:23 am 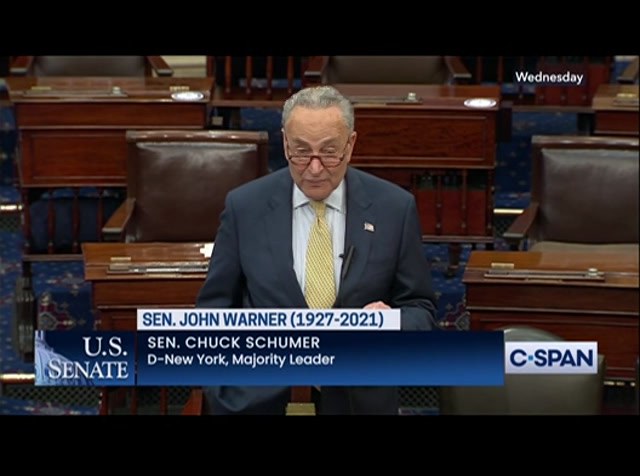 actually interrupted his law school studies to join the marine corps during the korean war. the kind of stature that he had, his great -- great, great reaching across the aisle in bipartisanship is something that this chamber misses and we miss him. at my request, the flags will be lowered to half-staff on behalf of his honor. on behalf of the senate i want to ex our mr. mcconnell: mr. president. the presiding officer: the minority leader. mr. mcconnell: i was saddened to learn this morning that our friend and former colleague, senator john warner, passed away last night. by the time i arrived in the senate, john was already churning a long wake as one of this body's foremost voices on national defense. as a wartime veteran of the navy and marine corps, he was deeply devoted to the men and
left
right
Borrow Program
tv