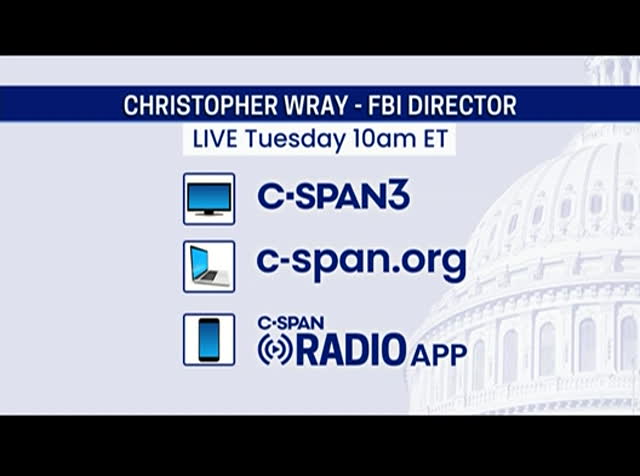 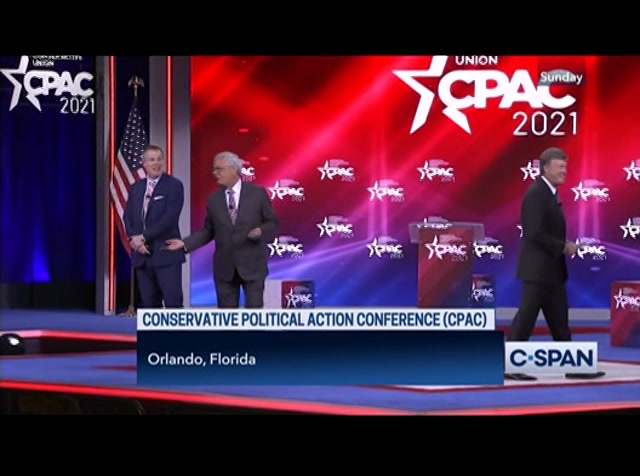 first vice chairman, charlie thoreau. >> this is the warm-up act, folks. despite the fact that the national pollsters can't seem to have her get it right, people still love polls. all of you have been the star of the cpac poll this week and you are about to hear the results from donald trump's pollster, jim mclaughlin. he is one that does get it right. before we hear from him, we are going to hear from tim constantine of the washington times. i have one question for all of you that wasn't on the cpac poll.
3:50 am 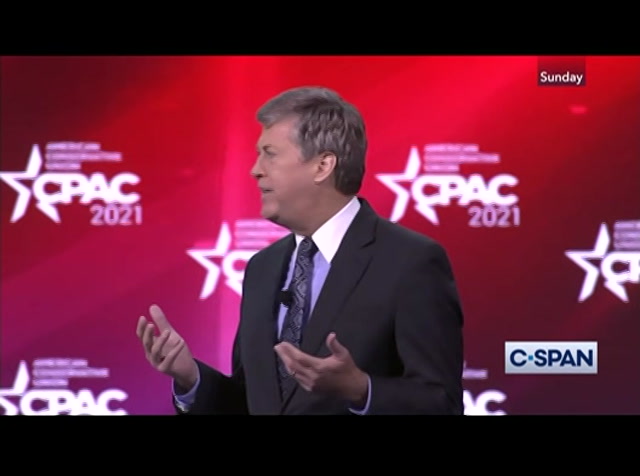 was the decision to bring cpac 2021 to orlando a good one? >>[cheering] >> ladies and gentlemen, tim constantine of their washington times, america's newspaper. >> the washington times has been doing to cpac poll for as long as i can remember and it is agreed, every year, of where america stands. and you are unlikely to get much of this information from the mainstream media. as a matter of fact, before you to the results, let's do a quick pull right here. when you are trying to find information that is what people in the heartland of america think, how many of you pick -- how many of you think cnn is a good source? >> [booing] >> how about msnbc?
3:51 am 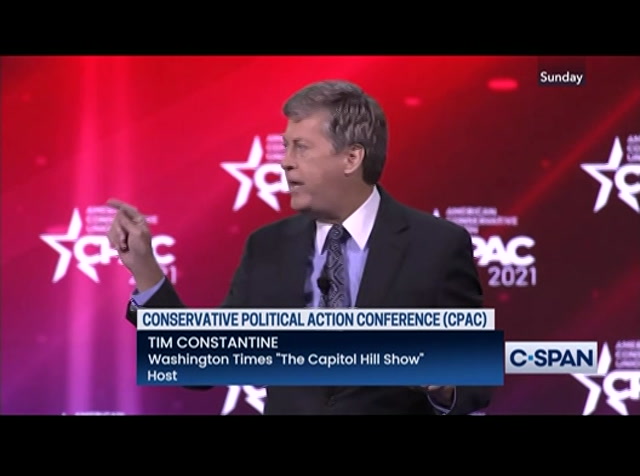 >> [booinh] >> how many of you think cpac is a good source? >>[cheering] >> the most popular source of the cpac poll every year is the presidential poll, we look at who we would like to be the nominee in the next cycle. i have to tell you that we look at all that ends on there and you look at how many of them spoke at cpac this year. they understand that this is where to, and reach the people that actually are focused on the issues. the republicans have a very deep bench. for baseball spring training started today, every team has a star but it is the teams that have a deep bench that do well. i look at the bench that the republican party has looking ahead to 2024. you have people like governor
3:52 am 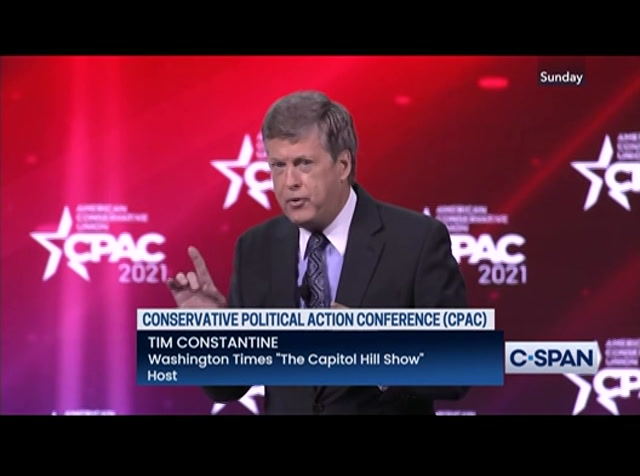 ron desantis. >> [cheering] >> you have senator josh hawley, senator ted cruz, senator tom cotton. >> [cheering] >> all those are potential candidates, all of those spoke at cpac. at the let you in on a secret, don't let this room. i don't know if you folks know this but there is one other gentleman who might be on the ballot in 2024. and in about 20 minutes, president donald trump is going to be on this stage. >> [applause] [cheering] >> so, before we do that i think you are going to enjoy, we are
3:53 am 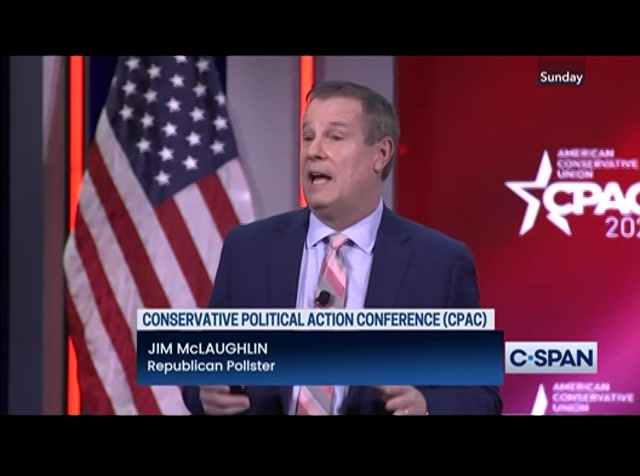 going to give you some of the results of the pole. jim mclaughlin was trump's pollster, he is also the washington times poster and he has put together this information for you. i will give you the three second sneak peek, you're going to like it a lot. >> thank you very much, that was great. i will tell you something, we were the ones crazy enough in 2016 to actually say on the sean hannity show the friday before election day that president trump was going to win. let me tell you, we got attacked by the media like you wouldn't believe and i'm sure when they see the results of this, and i can tell that our poll was right. but without further ado, let's have some fun. i think unfortunately this poll is going to trigger a lot of the media again. [laughter] what is the most important issue that is facing the country today? by the way, this is an issue the press is trying to tell us there is nothing to see here.
3:54 am 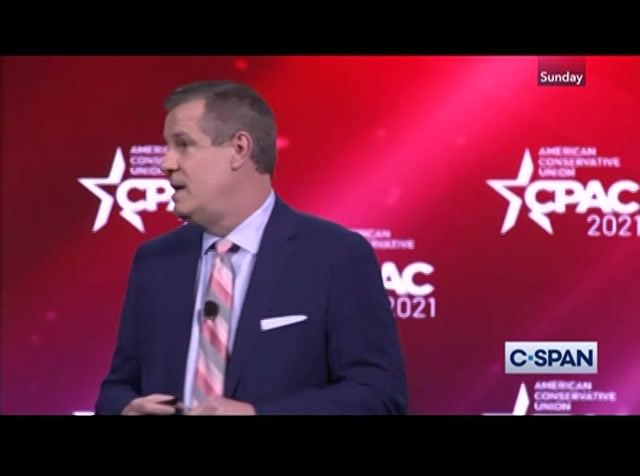 remember, we'll add you to select three choices, 62% said election integrity. 48% said constitutional rights. 35% said the gratian or the wall. 32% set reopening the economy. when it comes to former president trump's issue and policies, 95% of you wants to continue his policies. 95%. amazing. amazing. there is only 3% that want to move away, must have let a couple of reporters and. [laughter] would you like to see donald trump run again for president 2024? >> [cheering] >> seven out of 10, it is tough to get seven out of 10 to agree
3:55 am 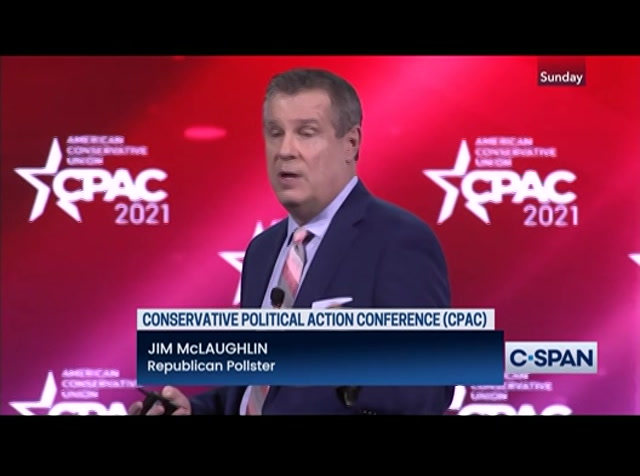 on anything but that as far as i can tell, that number is right, right? and thinking ahead, this is the ballot with president trump in it. if the election were held today, who would you vote for? and far away, the front runner is president trump with 55% of the vote. the next is ron desantis, getting 21% of the vote. then everybody else is down in single digits. by the way, that 3% other was people saying mostly trump other candidates. just so you know. this is without president trump, ron desantis gets 43%. kristi noem gets 11%. donald trump, jr. gets 8%.
3:56 am 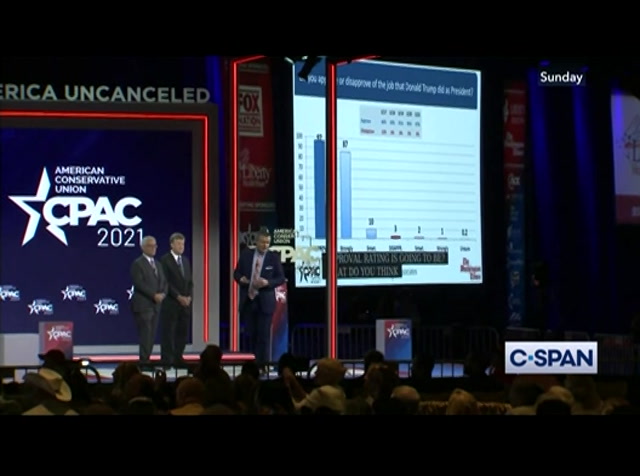 again, you see how important to everybody here the grassroots, the base of the conservative movement, the base of the republican party. it is either president trump or a trump candidate. here's the last one, just so everybody has a good idea, what you think his job approval rating is going to be? would you think? 90%? it was 95% last year. >> [cheering] >> thank you. you made my job really easy. he has a 97% job approval. look at it, nobody in the history of the conservative movement has earned your support the way this president has. look what happened, it has gone up every year. not only do 97% say they approve
3:57 am 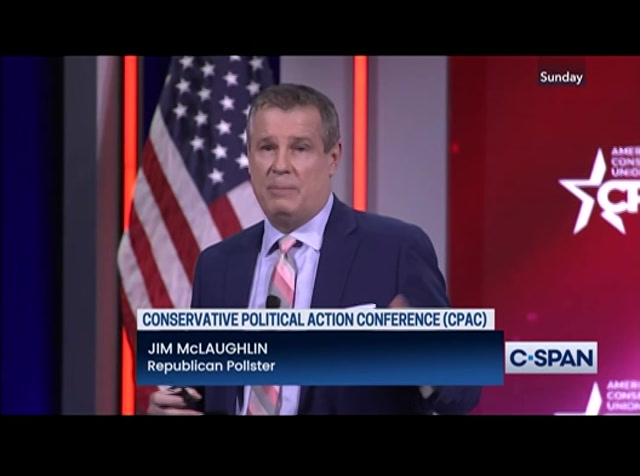 of this president despite of the fact they are trying to cancel him, more important, they are trying to cancel you. that is what if this is about. you have 87% who say they strongly pursue -- strongly approve. i have been coming to cpac now, i'm to come here in college, that is how long ago. i appreciate it. i can't tell you how much on a personal level, how inspired i am by the people i have talked to over the last couple of days. keep it up, and get ready for president trump. >> [cheering] >> we have one of america's premier posters here -- premier pollsters here, i know all of you saw the data, you have euro takeaways but of all of that
3:58 am 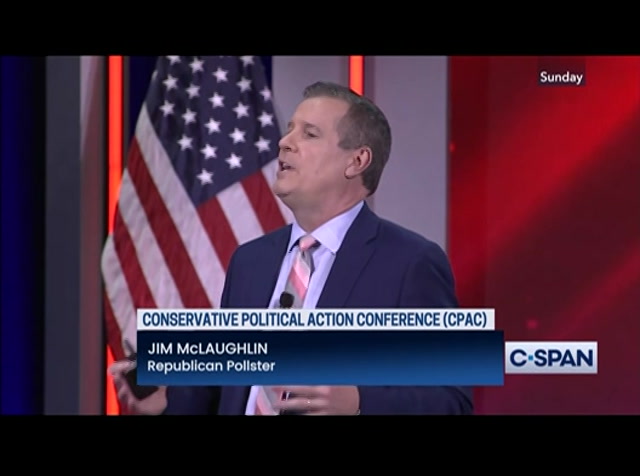 data, what is the number one thing you think we ought to take away and remember? >> that the make america great again movement, that is the conservative movement. that is the face of our party. and you know, something we talked about the other day, nbc news, wall street journal poll came out the other day. they did this comparison about how president trump had improved the republican party among middle-class and working-class folders. they just figured it out. donald trump is the guy that connects with middle america. he showed us how to win. he got record percentages among african-american voters, got nearly one out of five black males in this country. got a third of the hispanic vote, significant improvement. improved percentage of catholic vote. also women. now all we have to do is build upon that and i am telling you, we are going to have the congress and the senate in 2022
3:59 am 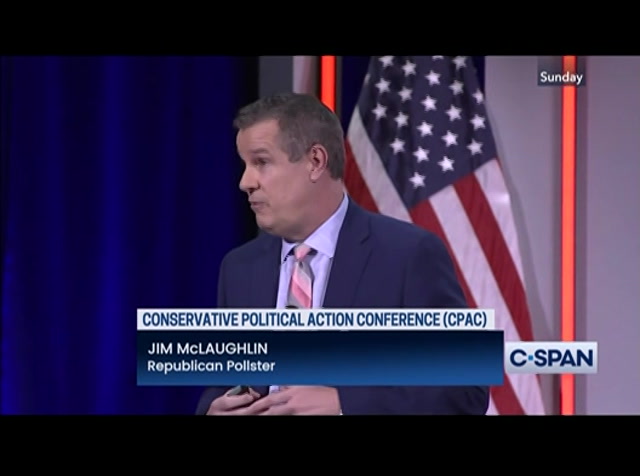 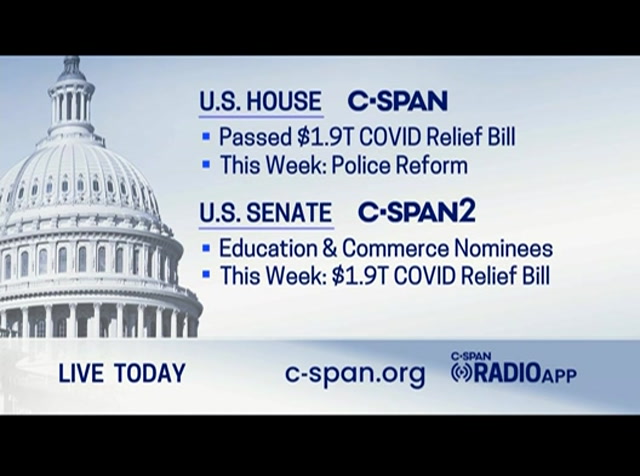 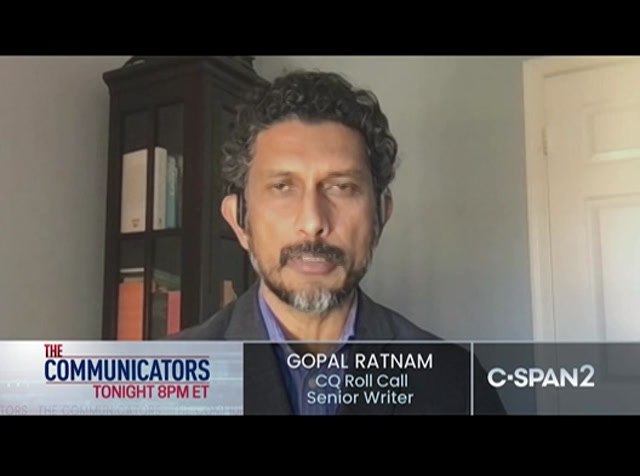 ou, good morning. thank you for the opportunity to speak before the committee today
left
right
Borrow Program
tv

The CPAC straw poll results were revealed by pollster Jim McLaughlin, and Chris Dolan of The Washington Times.