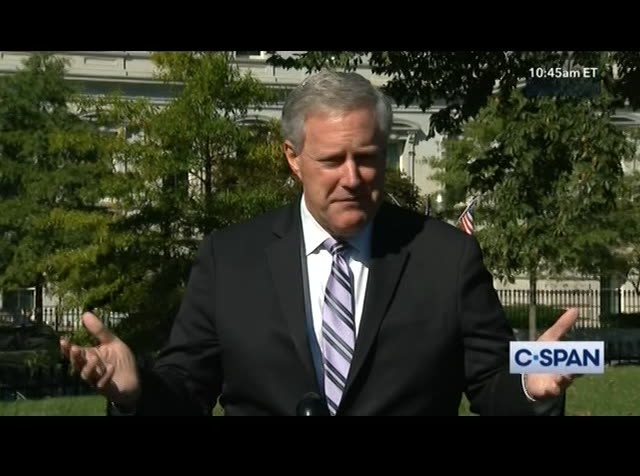 an update to all of you, show the courtesy of giving an update, we'll have future updates, i'll be glad to do that. any other specifics -- [everyone speaking at once] >> later in the day white house press secretary kayleigh mcenany gave an update on president trump and the first lady following the announcement that they tested positive for covid-19. reporter: what kind of test did the president get? did he get a followup test?
5:02 pm 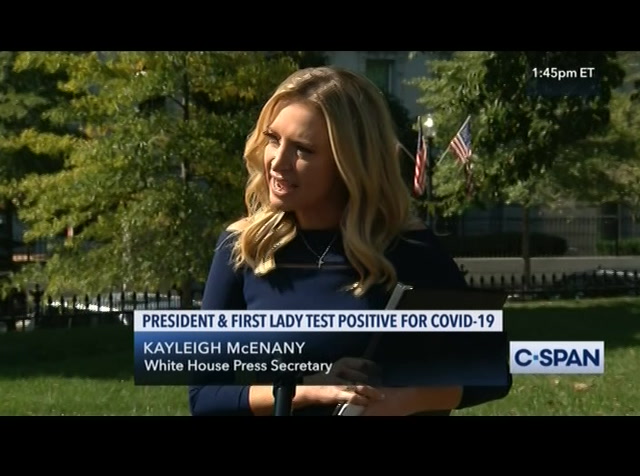 how confirmed is this? kayleigh: i'm not going to get into what test, but as soon as he tested positive for covid-19, within an hour we put that information out to the american people. reporter: [inaudible] kayleigh: i'm not going to get into the president's symptoms exactly. he has mild symptoms. he's been on the phone with senator mcconnell, senator graham, been on the phone with chief of staff mark meadows, talking about an emergency declaration as well as stimulus. he's hard at work despite mild symptoms. eporter: earlier they said others tested positive before the president departed, why did he still go despite that? kayleigh: it was deemed safe for the president to go. it was an outdoor event, it was deemed safe. proid diyou know yesterday when
5:03 pm 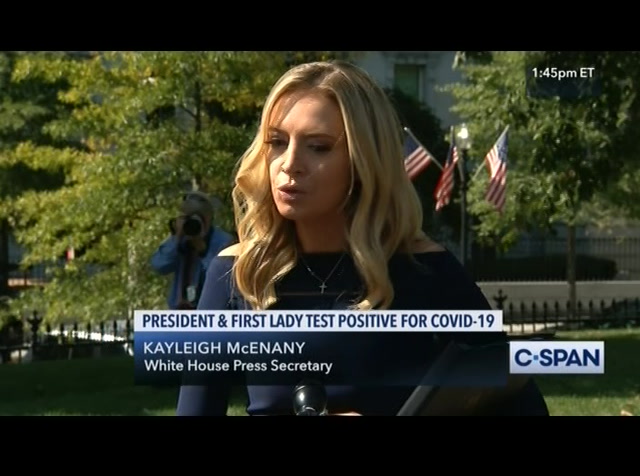 you briefed -- kayleigh: i did not. i heard some inaccurate reporting. others reported falsely, i had no knowledge of the pozz -- of hope's positive test then. decided itho exactly was ok for president trump to travel to new jersey on air orce one, a small space. kayleigh: the white house physician made that determination. >> you're watching c-span, your unfiltered view of government. created by america's cable television companies as a public service. and brought to you today by your television provider. >> coming up later today, 2020 vice-presidential candidate senator kamala harris campaigning at a drive in voter
5:04 pm 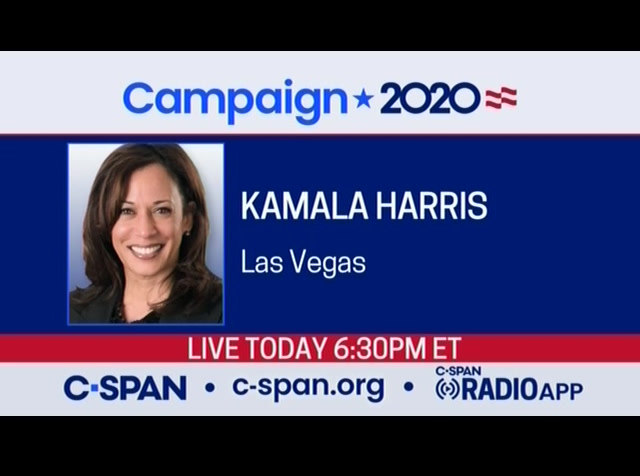 mobilization event in vegas. that begins at 6:30 p.m. eastern here on c-span. earlier today the house debated a measure on consent for medical procedures. this comes after allegations that immigrants detained at an i.c.e. center in georgia say they had invasive procedures they did not consent to. this is 45 minutes. air. i ask unanimous consent that all members may have five legislative days to revise and and insert remarks extraneous material on h.res. 1154. the speaker pro tempore: without objection. ms. jayapal: mr. speaker, i yield myself such time as i may consume. the speaker pro tempore: the gentlewoman from washington is recognized. ms. jayapal: mr. speaker, magine this -- you are an immigrant woman detained in a detention center. asking for ve been help for months about a painful condition or perhaps you had no medical complaintat
left
right
Borrow Program
tv

White House Press Secretary Kayleigh McEnany spoke to reporters about the president's schedule and how he's doing after getting a COVID-19 diagnosis.