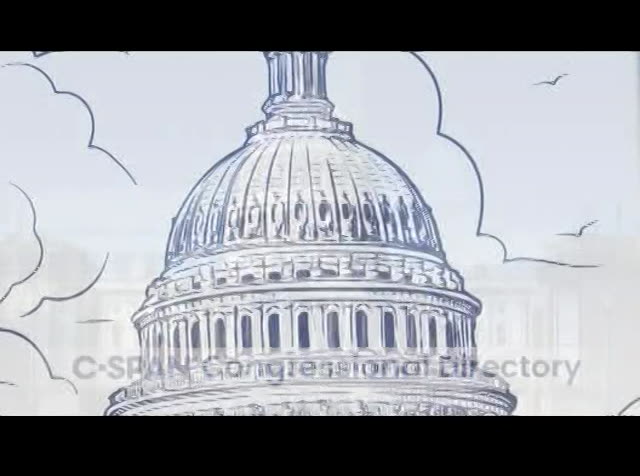 during the summer, reach out to your elected officials with c-span's congressional directory yard it contains the contact information you need to stay in touch with numbers of congress, federal agencies and state governors. order your copy online today at c-span store.org. tuberville declared history -- victory in the republican primary bun up election at any event in montgomery alabama. he beat out jeff sessions, the former attorney general and u.s. senator. we hear his remarks to his supporters. [applause] congratulations on a hard-fought campaign.
7:35 pm 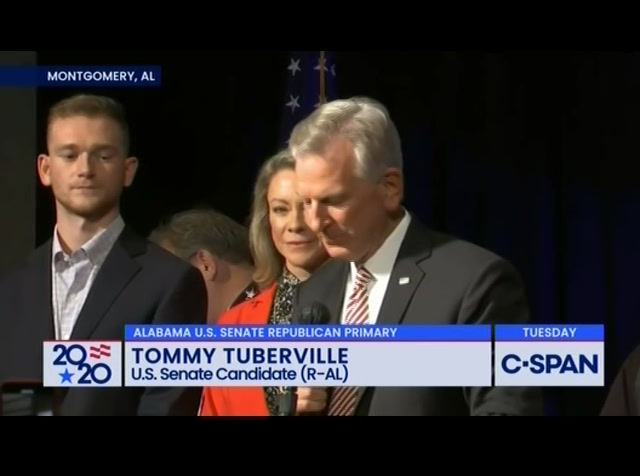 being a coach, you get into a game and you lose -- 20 loses, the other doesn't. team of loses but the other doesn't. you both reach out after that. this is a great country we live in. i talked to senator sessions, he was also. he said, i'm all in. [applause] i think his service and what he has done for many years for the state and country. in the publicng life that long. sessionsw that jeff and his supporters are behind us. we will need everybody on deck. this is going to be hard. supportppreciate your
7:36 pm 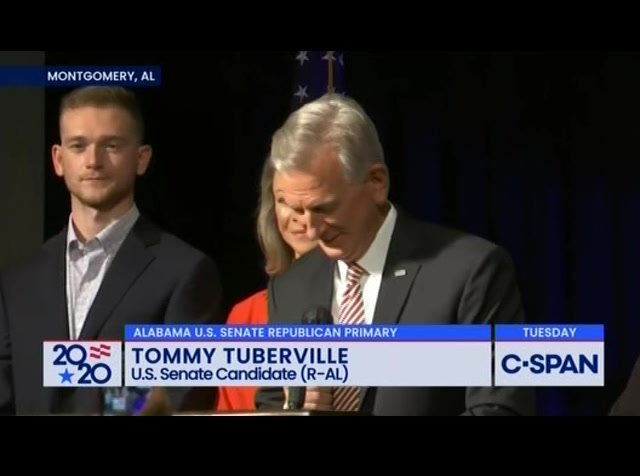 and we are all on the same team. [applause] the past year and a half, what is the hardest thing i've ever traveled to every city, town, and crossroads in alabama. , iave listened to stories listened to it all. i have listened to the concerns of everybody, there are a lot of people hurting. i have been listening. i have not taken anything for granted. i stood in the field with farmers. putting their crops in, back and planting season. a month ago. planting thatven crop to feed their family, they are planting that crop to feed our families. it is important we understand
7:37 pm 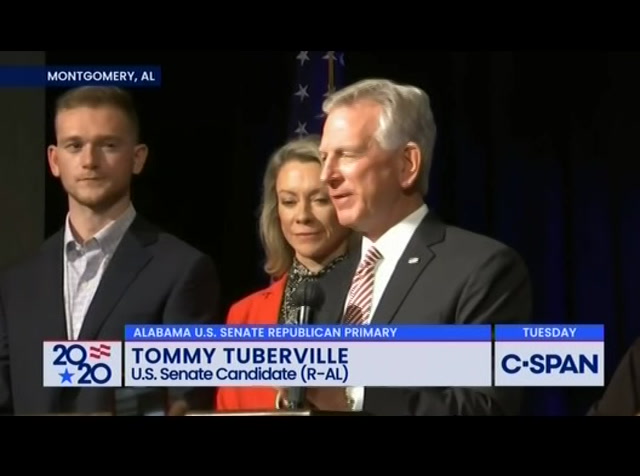 that. i want to thank alico for their support. they have been huge. [applause] i sat with military veterans who civilly wanted their country -- we simply want to their country to keep their promises to them, like the v.a. i have talked to many of them. officers, enforcement firefighters, amulets drivers, who risked their lives and safety every day to provide help for all of us. we are tough time that going through as we speak today with everybody wearing masks one time or another, i have listened to doctors and nurses who have been on the frontline battling this china virus, this unseen enemy, and hospital wards nic units and at his been tough.
7:38 pm 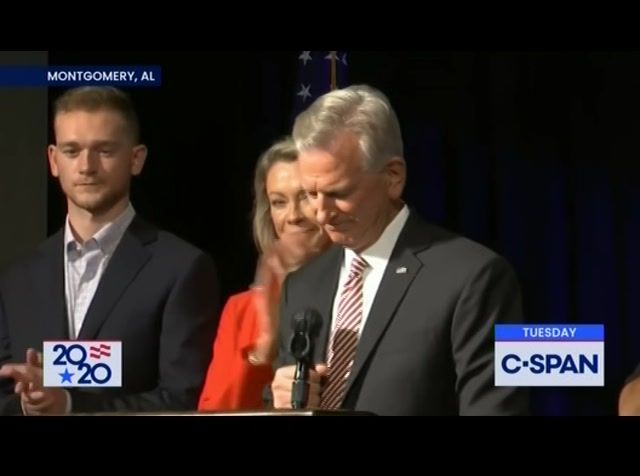 have also comforted the jobless. many places i have been, people have been out of jobs. president trump, who is the best president in my lifetime -- [applause] who, by the way, called 30 minutes ago and wished us luck and congratulated us on what happened today, those people becausejobs are worried they don't know what the future holds and none of us do. all those stories and 1000 more like them have touched my heart and i promise that your thees and all the voices of state of alabama will be heard on the floor by the united states senate. [applause] you know, today reminded me of
7:39 pm 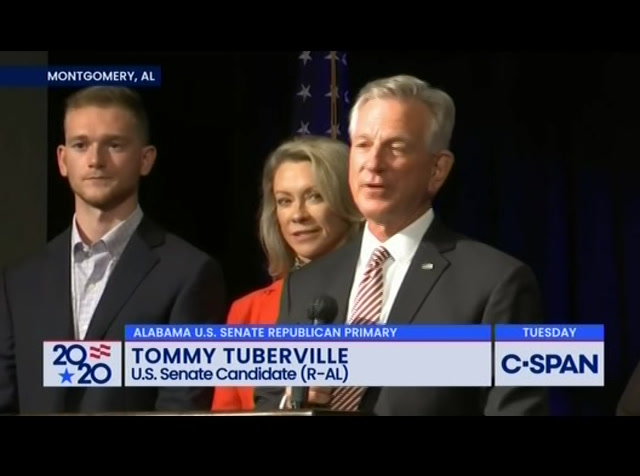 my mom and dad. both deceased. at a young age, instilled in me the importance of serving others. in fighting for what i believe is right. my dad dropped out of school in 10th grade. to join the military in world war ii. he said, i got tired of following that mule appeared -- that you will. -- that mule. but at 18 -- think about this -- en thousand of others men and women -- he and thousands of other men and women in this country and others landed on d-day at 18 years old. europe, a tank across losing friends every day, fighting for every inch, every
7:40 pm 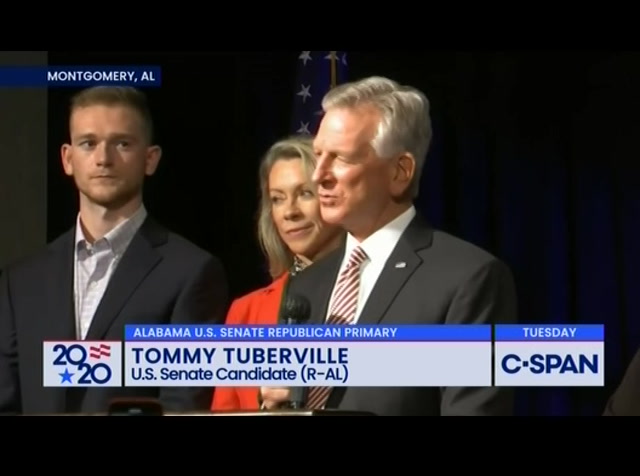 foot, and every step. , my dad had end earned five bronze stars. bronze star is fighting and a major battle. if you win one or two of those, it is special. earned five.he he was my hero. [applause] heart, whichurple nowadays is a one million-dollar wound, they send you home. back then, they put him in an infirmary for a month and sent them back to the front lines. he got hit in the back, he had a big hole in his back and asked him, you got it in the back, he said, yes, i was running like hell, my take was on fire. [applause] i can't imagine what that generation did. but there about this election, i will be fighting for many of the same ideals, same principles,
7:41 pm 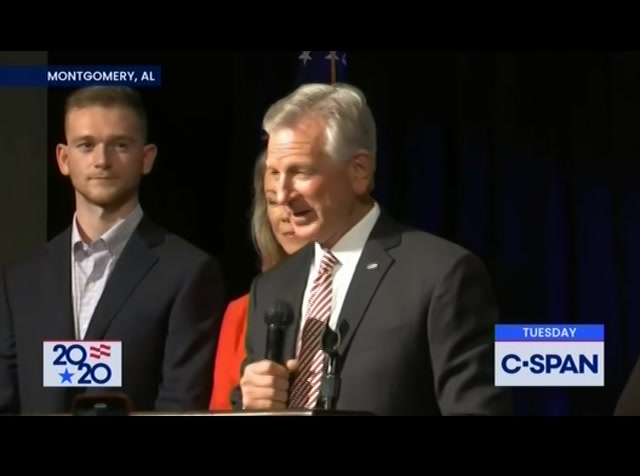 and same god-given freedoms that my father and others like him in the greatest generation fought for so many years ago. [applause] now, now we turn our eyes towards our next opponent. >> [inaudible] we've got ale: little over 100 days because this runoff was pushed back. democrat doug jones is running for reelection with a slogan of one alabama. well, make no mistake about it, what he really means is one level alabama -- one liberal alabama. in doug jones's alabama, you take your marching orders from joe biden, nancy pelosi, and chuck schumer, and the bartender aoc. in all the liberal left.
7:42 pm 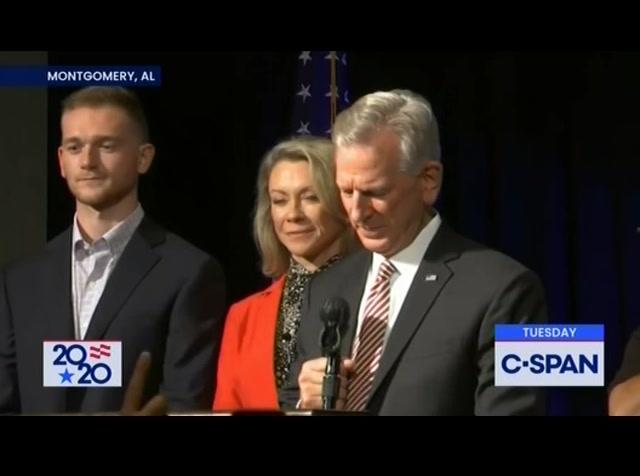 in doug jones about the alabama, the second amendment is just a thought, it is not in the because the two should. they are not taking our guns. [applause] in doug jones' alabama, you vote against conservative judges. people that believe in the constitution, believe in this country. he voted against brett kavanaugh. are you kidding me? have got to have conservative judges in this country to go by the rule of law. [applause] in doug jones' alabama, you don't work for your state in alabama, you don't work for the united states, we spend the first three years trying to impeach the best president we ever had and he voted to impeach him. jones' alabama, the rule
7:43 pm 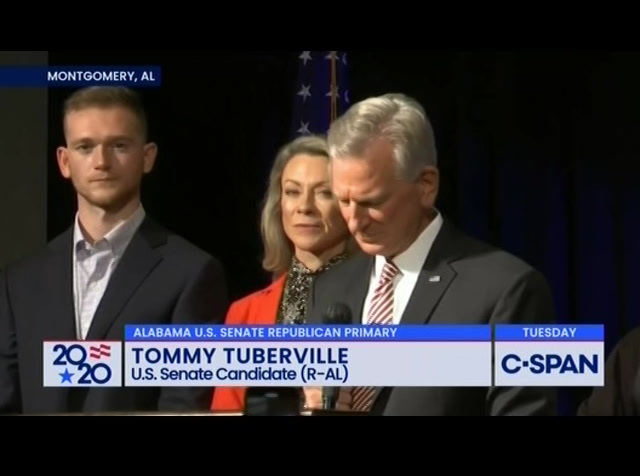 of law is mob rule. think about that. is not law enforcement, it is mob rule. alabama,ones' politically correct is the name of the game. i'm so sick of that. i'm sick of it. [applause] is not as' alabama conservative state that we love and embrace and defend. it is a liberal fantasy, a little fantasy is what doug jones believes endured -- believes in. he believes in funding planned parenthood but defunding the holy spirit we can't make it yes but defunding the police -- funding planned parenthood but defunding the holy spirit it is time we have 8 -- defunding the police. it is time we have a senator that represents alabama values, not new york values, not chicago
7:44 pm 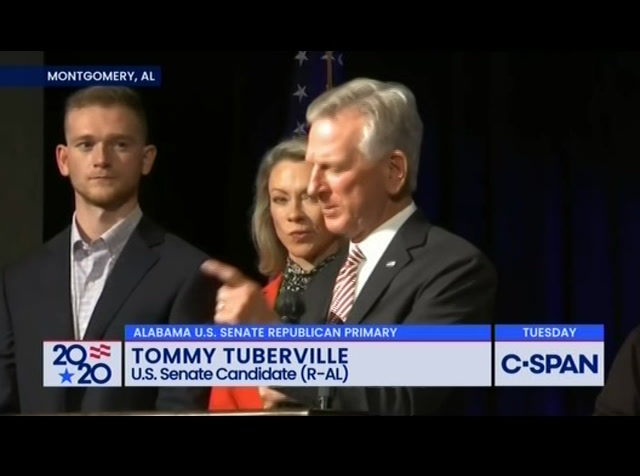 values, not liberal democratic values. we need a senator that believes in our values. ,t is our mission, our movement our moment to reclaim alabama senate seat from joe biden, and -- putelosi, and parted it back in the conservative column. in that effort, begins right now, and tonight. [applause] thank all of you for coming tonight. this has been a great night for me or my family, this has been a great night for alabama and the united states of america. [applause] heret to think everybody for your support. we have a hard road ahead the next months. i'm telling you, i am not taking any days off in the last 480 and
7:45 pm 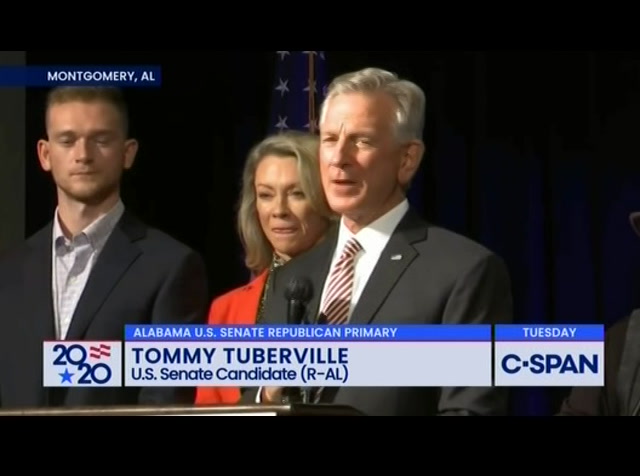 i'm not going to take them off now. [applause] so i want to say this. god bless all of you. god bless sweet home alabama. [applause] and god bless united states of america. thank you. thank you. [applause] >> here is my man right here. i met him a few months ago. what's in that class? -- that last? -- that glass? [laughter] no.
7:46 pm 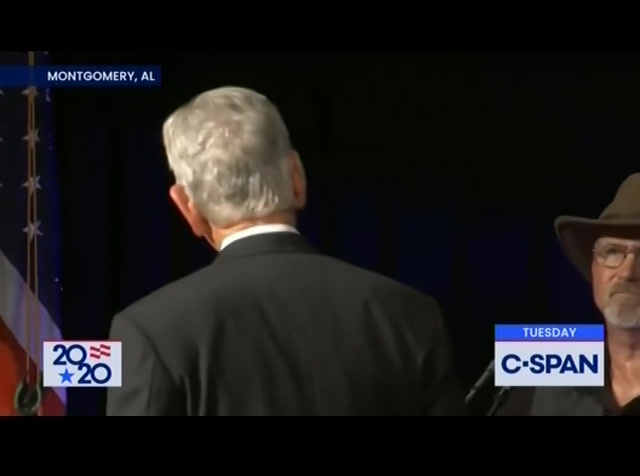 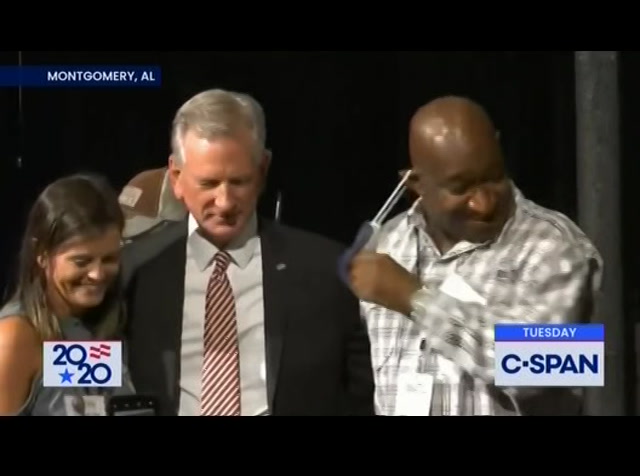 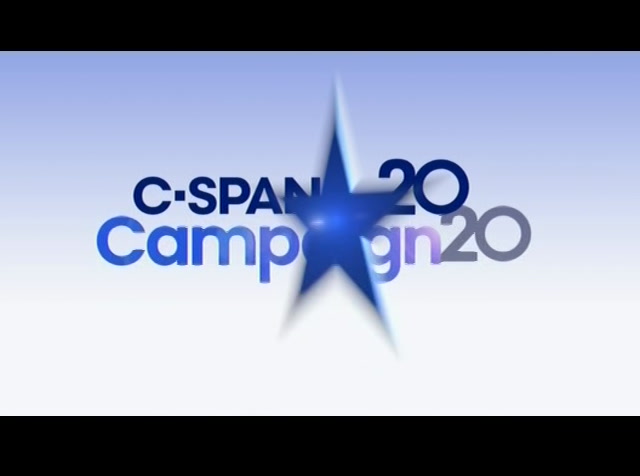 ♪ democratic and republican party, the campaigns of president trump and joe biden, or adjusting plans for next month's political conventions, received by the coronavirus. for amocrats will convene scaled-back convention in milwaukee starting artist 17. the republicans meet the following week on tuesday, august 25 in florida. the democratic and republican national conventions, live on c-span, beginning august 17, and watch anytime on c-span.org or listen with the free c-span radio app. c-span, your unfiltered view of politics. the house and senate return on monday to resume legislative business following their state work. bank over the fourth of july holiday. the house consider the 2021 national defense authorization act with both expected as early
7:49 pm 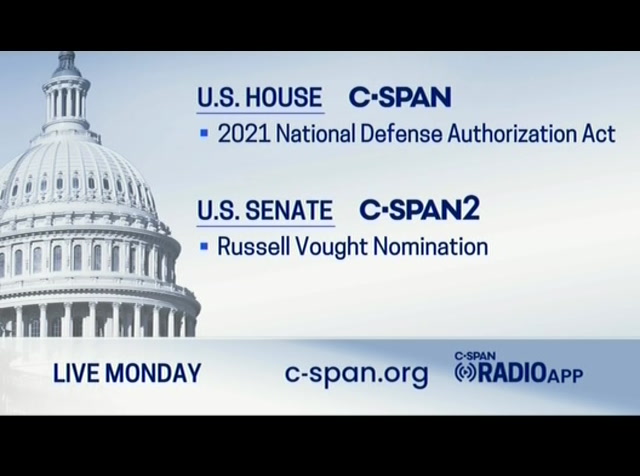 as 11:30 eastern. the senate committees at 3:00, they resume debate on the nomination of was about to be director of the office of office medicine and budget. he has been serving in an acting capacity since january 2019. the senate limited debate and advanced his nomination on july 2 on a partyline vote of 47-44. at 5:30, the senate both on confirmation of the vote nomination. watch live coverage of the house when they return on c-span, coverage of the senate on c-span2. whatever live daily unfiltered coverage of congress, the white house. >> our countries are the like trade and travel. >> on issues that matter to you. >> ongoing efforts to focus on a mission to save lives and meet the needs of our states, health care workers. >> along with briefings on the pandemic. supreme court oral argument and decisions. >> thanks for coming out.
7:50 pm

>> the latest from campaign 2020. >> your calls and comments welcome. >> be part of the conversation with washington journal. if you missed our live coverage, watch anytime on demand at c-span.org or listen on the go with the free c-span radio app. joining us from las vegas is jon ralston, the editor of "the nevada independent." as you look at the race campaign 2020 with three and a half months before the election, give us, in your words the political , lay of the land in joe biden -- between joe biden and president donald trump. guest: biden has an advantage, steve. the democrats have a formidable machine. they won the presidential race the last three cycles. hillary clinton beat donald trump by 2.5 points although , that was closer than it looked because the race was essentially
left
right
Borrow Program
tv

Tommy Tuberville, the former Auburn University football coach, declared victory in the 2020 Alabama U.S. Senate Republican primary runoff election at an event in Montgomery, AL. He beat out Jeff Sessions, the former attorney general and U.S. senator. During his remarks, Mr. Tuberville said he had received a call from Mr. Sessions congratulating him on his primary victory, and that he looked forward to working with supporters of Mr. Sessions to win in the November 2020 general election. After his speech, Mr. Tuberville greeted and took pictures with supporters who had gathered at his primary night celebration.