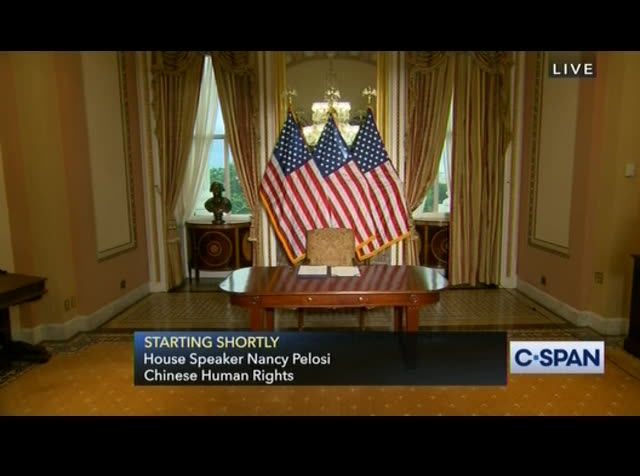 >> my check -- mike check -- mic check. >> good morning, everyone. thank you for being here as we enrolled our bill. this is legislation regarding the human rights policy act. withere with my colleagues whom i've worked for decades on human rights in china and the world. this legislation sends a clear message to the government of china that we are well aware of andabuse of human rights
10:10 am 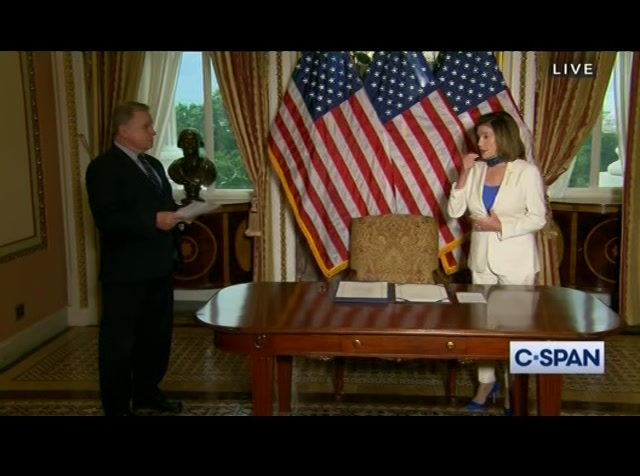 our community is concerned. i want to thank his leadership and also senator menendez, senator rubio who has been a champion on this, and the chairman of the foreign relations committee, and in the and jimliot engel chair of ao is the congressional executive commission on china and chair of the committee on which mr. smith is a cochair as well as a ranking member. that is all to say that in a bipartisan way, over the years,
10:11 am 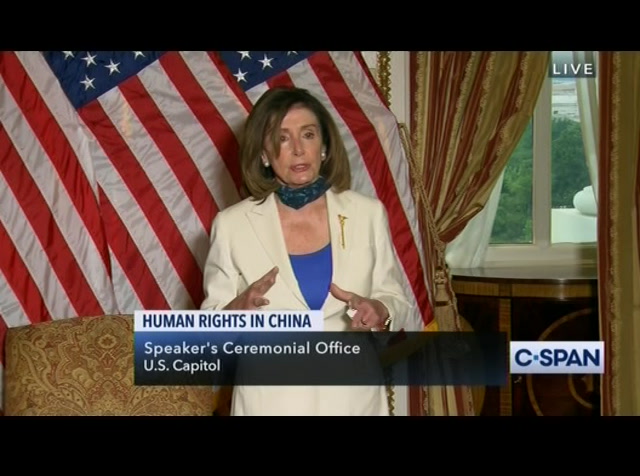 there has been a real commitment to shining a bright light on the human rights violations in china and to say to those who are affected by that, you're not alone. the most excruciating form of torture that the oppressors can get to those who they are oppressing is to say nobody remembers, nobody cares, but we do, and we want the chinese government to know that. that's why it is such an honor to enroll this bill, passed by the senate and house in a strong bipartisan way. meaningful when on june 4, we observe the 31st anniversary of the tiananmen square massacre. we are talking about the denial that the chinese government has about that massacre, talking
10:12 am 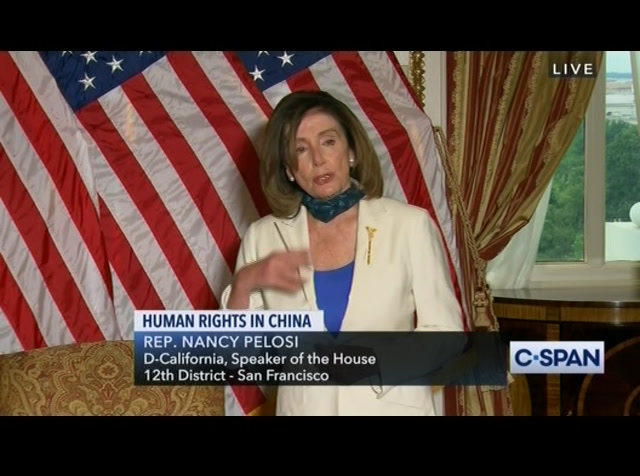 about depression in tibet -- oppression in tibet to eliminate the culture, language, and talking about oppressing democracy in hong kong and china . the years we in have been working together has not improved, sadly, but we will never stop. we never decide that for commercial reasons, we will not call attention to the human rights violations in china. we are all concerned about human rights everywhere in the world. with that, i have great gratitude to mr. smith. no longer in congress, but very much still on the forefront.
10:13 am 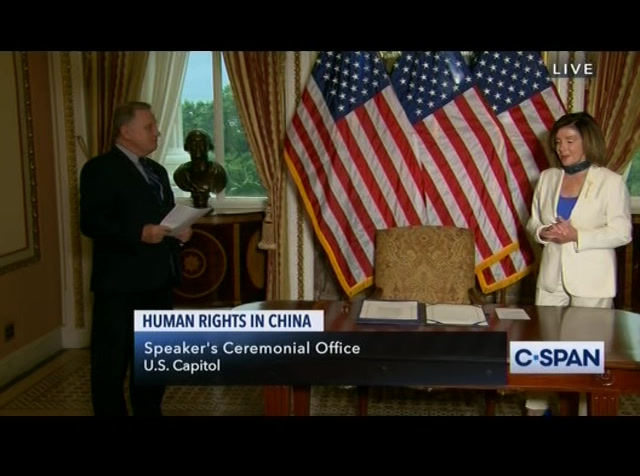 >> thank you very much. as you mentioned, on the eve of the 34th remembrance of the massacre which the chinese government continues to deny that people buy, i want to thank you for your extraordinary leadership on behalf of the people of hong kong, the people of tibet, religious believers throughout the entirety of china and especially now the subject of a xi jinping genocide. more than one million people are in concentration camps. they are often be in families have been torn apart. her entire family, all the extended family, are all jailed. that's how they are doing it.
10:14 am 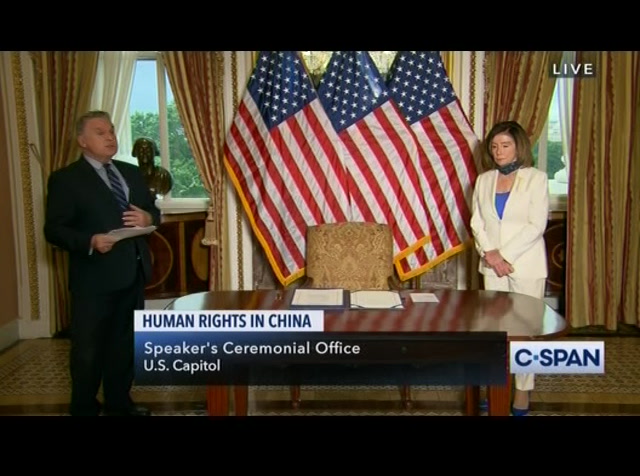 i would point out that in 2018, marco rubio and i cochaired the china commission hearing. she had been arrested as part of this massive internment, torture. 60 plus women were all in one cell, they couldn't even sleep at night or during the day. they had to stand because there was no room. they took turns moving away for some of the more elderly to recline. she said she was so horribly mistreated and electrocuted as a part of torture and sexually abused, she prayed to god to die, and she asked her reporter, why are you doing this. you know what he said? because you are a muslim and because you are weaker. plain and simple. that is what we are dealing with here. this,ping is directing
10:15 am 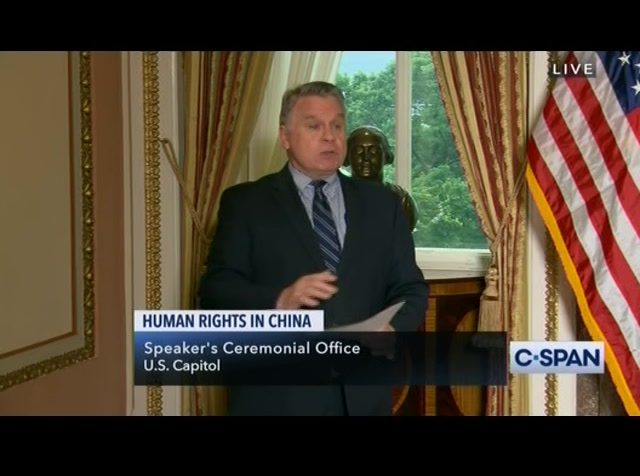 pointed out that this was all , 10 of a plan to crush them million people we are talking about, or more, at least 10 million. just a read quotes from xi weapons must be wielded without any hesitation or wavering. be aid that there had to smashing. crush people, and you do it with torture and you do it with aon at. identical toy legislation from new york, and 136 cosponsors who gave their full endorsement of that things take a while, even important ideas like this one. , we willat is in this
10:16 am 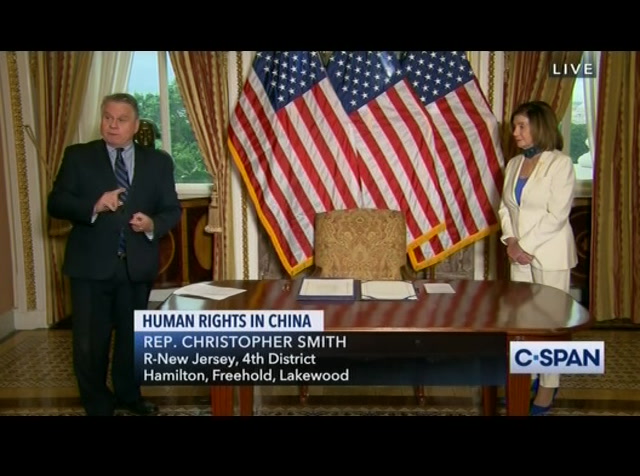 names and also the ability for any of these people to do business with the united states or any other banks, so it is an economic sanction and it is a start. it's only a start. i think the speaker. >> thank you so much for your honored to find this important legislation as we send it over. -- sign this important legislation and send it over.
10:17 am 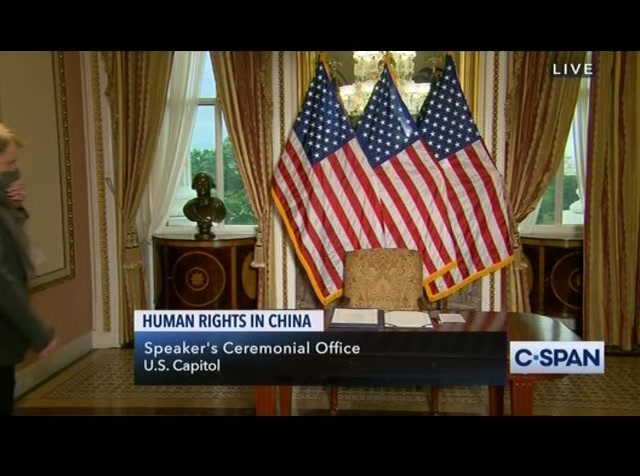 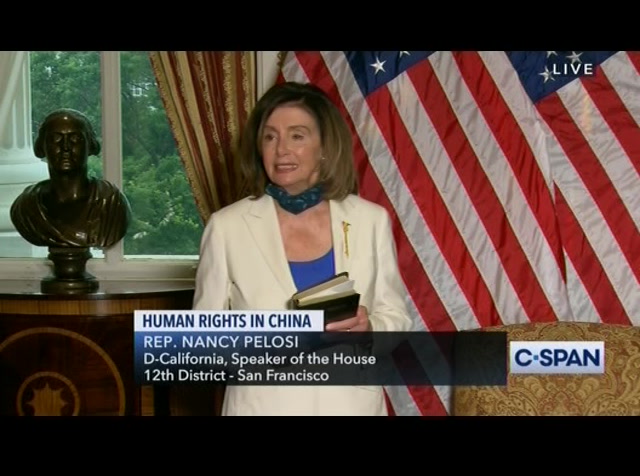 all commodities. the time it takes to make the change necessary, and it is long overdue to make some of that change that people are calling out for. of anwas thinking appointed time for everything. a time for every event under heaven. hear,ks about the time to a time to embrace and a time to show embrace. a time for peace. let's focus on the time to heal. the time to heal. the role of the president of the united states, the role of commander in chief, a person who has a responsibility to heal. president george herbert walker
10:19 am 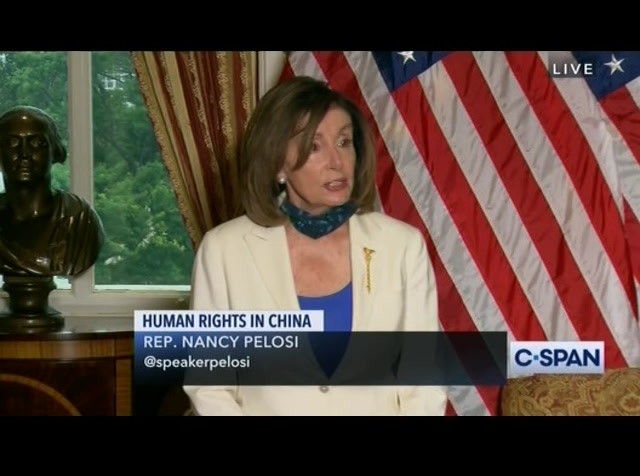 bush spoke out in circumstances similar to now when he said this after the rodney king beating. president george herbert walker bush said the following. those terrible scenes stir us all to demand an end to gratuitous violence and brutality. law enforcement officials cannot place themselves above the law. it was sickening to see the beating that was rendered and there is no way, no way in my view, to explain that away. president obama said after the murder of eric garner, right now, unfortunately, we are seeing too many instances where people just do not have confidence that folks are being treated fairly. in some cases, there may be misperceptions, but in some cases, that's the reality. and it is incumbent upon all of us as americans regardless of
10:20 am 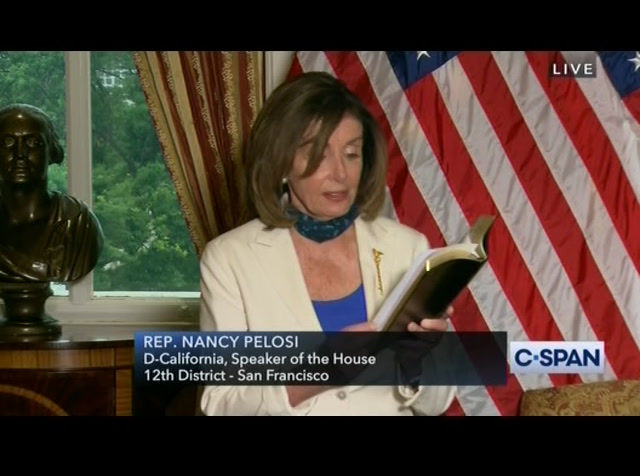 faith,eligion, region, that we recognize this is an american problem and not just a black problem or brown problem or native american problem, but this is an american problem. isn anybody in this country not being treated equally under the law, that is a problem. -- quote my close colleagues. he said this. firebombing police cars, burning down businesses, and ravishing our neighborhoods dishonors the -- and will destroy thousands of livelihoods. not about what our peaceful protests can sometimes lead to. but it is about how we treat people across our country. as president obama said the other day, many law enforcement
10:21 am 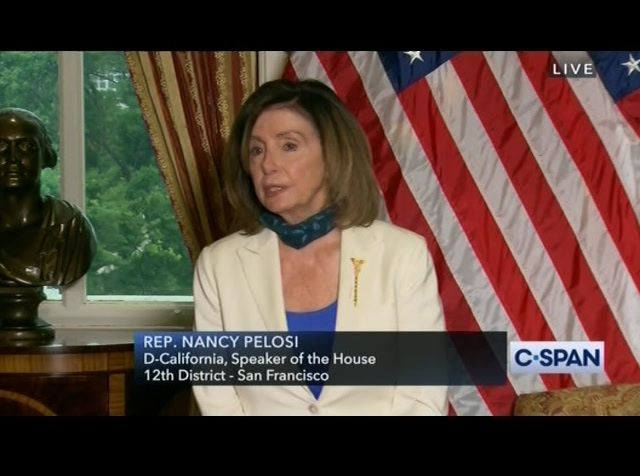 people take pride in what they do and do not identify with the actions taken against george floyd. happen, andit did it happened in broad daylight. it happened for all the world to see. not only by the perpetrator of that murder, but by three officers observing it. it's a time for us to address. why those concerns being addressed by the protesters, this is not an incident, a single incident. we know it is a pattern of behavior. we also know the history that place, and this sad that's why i'm so proud to work with the congressional black caucus and call that the conscience of the congress. the important work they are overtime,e been doing and are now ready when we come forward with legislation,
10:22 am 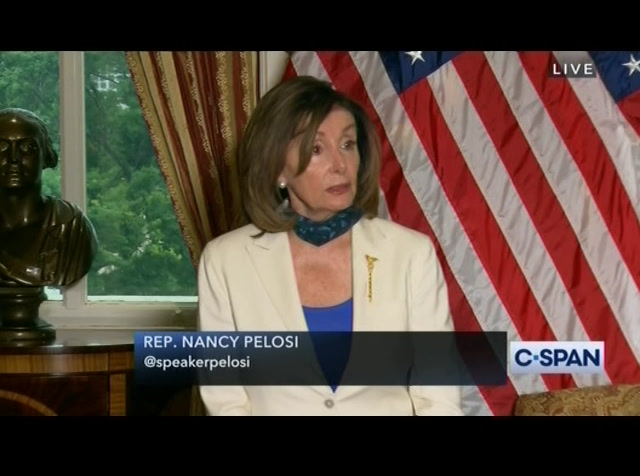 whether it is to end racial profiling or a number of pieces of legislation, police brutality being part of that, but racial , thating being universal we must be rid of. and so we will be making recommendations, they will be having their town halls, their hearings. of course, it is the responsibility of all of us to take the time to heal. forwe are looking to them the experience and leadership of legislation. chair hasman, madam and deeplyeasured concerned about all of this, working with our members. we have many legislative proposals. i wrote to them to curate them.
10:23 am 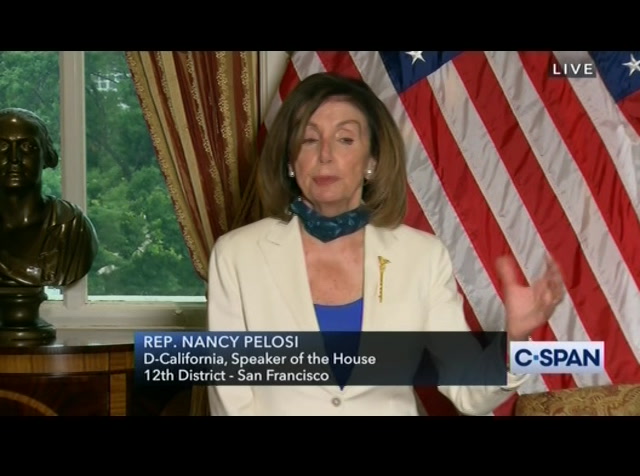 some of the members want to have a comprehensive bill, others a more individual approach. in a matter of just a short time, those decisions will be made and i think the american people will be well served. but we will hope that the president of the united states would follow the lead of so many other presidents before him to be a healer in chief and not a fan or of the flames -- fanner of the flames. yesterday we saw a most unfortunate situation where before the curfew, peaceful demonstrators in front of protesters, in front of the white house were beaten. people came out and beat them so they could clear the area so the president could come out and go forward. what is that? that has no place. it is time to do away with that. a time to heal. thank you all very much.
10:24 am 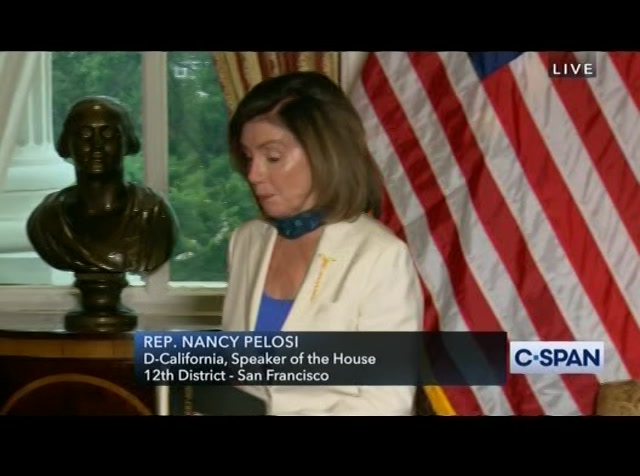 announcer: governors of colorado, michigan, and arkansas testify before house energy and commerce subcommittee on how their states are responding to the corona virus pandemic. watch live today at 11:30 a.m. eastern on c-span, online at www.c-span.org or listen free on the c-span radio app. on wednesday, former deputy attorney general rod rosenstein testified before the senate judiciary committee on the application process used during the fbi investigation into possible ties between the trump campaign and russian officials. the fbi's investigation was eventually taken over by special counsel robert mueller, who
10:25 am 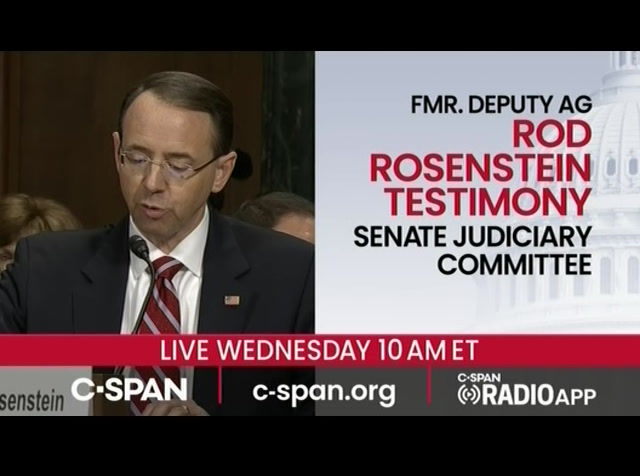 rosenstein appointed in 2017. watch live coverage of the hearings beginning at 10:00 and eastern on c-span, on demand at www.c-span.org, or listen live wherever you are on the free c-span radio app. up next little here from the three democrats of kentucky trying to unseat senate majority leader mitch mcconnell in the 2020 election. this program is courtesy of kentucky educational televisions "kentucky tonight." to be joinedighted by three democratic candidates for the u.s. senate who met the criteria and accepted our invitation to appear. charles booker has been a state representative for the 43rd kentucky house district of jefferson county since 2019. retired marine lieutenant colonel who ran for congress in the sixth congressional district in 2018. mike is a retired marine lieutenant
left
right
Borrow Program
tv

Sponsor: U.S. Capitol | Office of the Speaker of the House