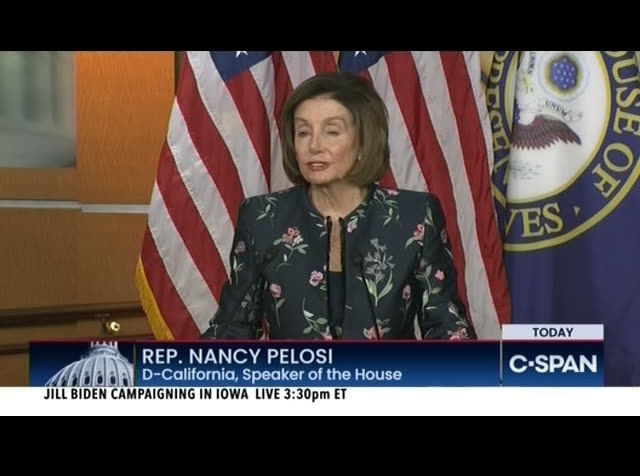 and to the republic for which it stands. whateverle 2, i can do i can. niners. where is chad? getting ready for the game or something? talking about is the bengals were going to make a comeback. pretty soon. that's what he was telling me yesterday. anyway, thank you, all, very much. [captions copyright national cable satellite corp. 2020] [captioning performed by the national captioning institute, which is responsible for its caption content and accuracy. visit ncicap.org]
3:18 pm 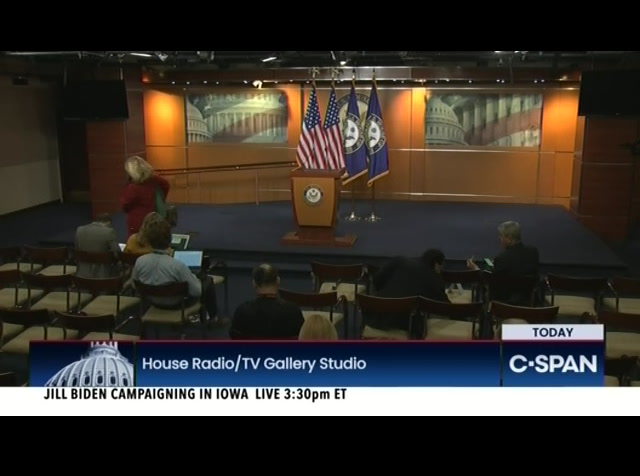 . . . . mr. mccarthy: good morning. good morning. once again, a great contrast the nation's capital this week. the president, the republicans ocused on making this stronger and this country stronger the democrats are infatuated by appeasing their socialist base the impeachment. we saw the president sign the united states-mexcio-canada. massive thing for america. mexico is our number one trader and canada is second. it makes us stronger for every indication and measurement. i didn't see any public comments and support from speaker of the house yesterday. democrats tol hill,
3:19 pm 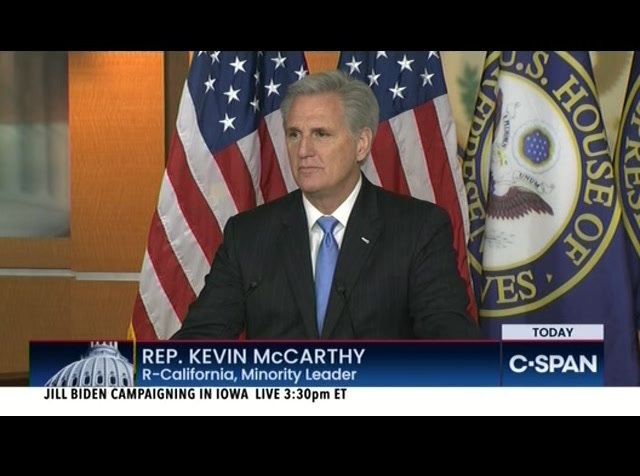 continue to be obsessed with their thinnest, weakest, and in thertisan impeachment history of the united states. the ring leader of it all, once an adam schiff, lied again. as i watched, he was asked a direct question yesterday about interactions with the whistleblower and he repeated he same lines he said in the past. 17 of the 18 transcripts have been let go. one has not. 179 pages. inspector general. i wonder why. was nteresting thing is it not leaked to "the new york times." if we ever imagined if this was ad for the president, it would first be leaked and then it would be released. interesting to me that adam schiff said he couldn't release it. can.es, he all he has to do is call his committee together and have a vote. but he never allowed it to happen. interesting that this all started because there was an a . letter about
3:20 pm 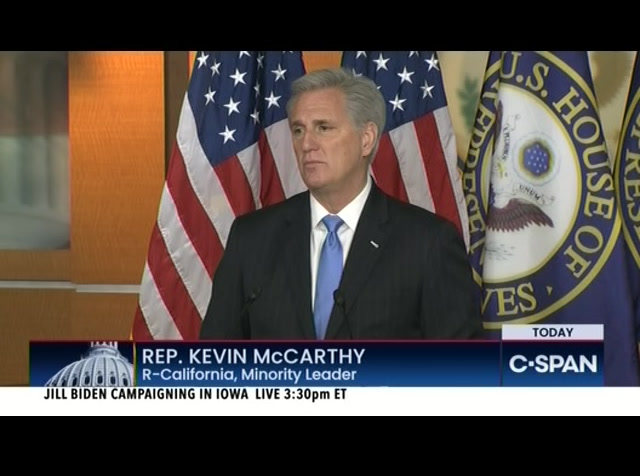 whistleblower. adam schiff told us he did not who this person was. later, we found out he did. they we found out that met. it would being from on the before , did they meet the inspector general? did the inspector general know met?his staff and him i guess if some of that was true, the only person who knows the answer to those questions adam schiff, who's the only person who's denying us the transcript.ave that could he be a fact witness? transcript could probably tell us some of that. could a fact witness in any of legal basis of america be in charge? no. so begs to wonder why. release it? not of all of them that he released, others, and ifthe he started all this when i first watched him, he was very concerned that the whistleblower
3:21 pm 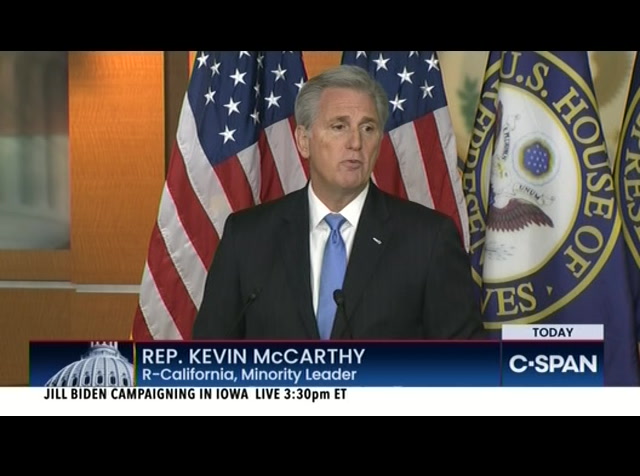 be able to testify, that somehow the administration whistleblower. well, that whistleblower was who ed but the same person met with him, the only person in the house, adam schiff. not all that's happening at the expense of lives.american the one thing i found with these democrats, everything that's not getting done. for example, what happened just this week. passed a bill dealing with fentanyl, making ure our streets would still be safe. judiciary committee hadn't done anything. had to shame them theyweek about it, to find moved something late last night. how many other things are not etting done because of all the focus is just on impeachment? americanld maybe every wonder, when will this nightmare end?
3:22 pm 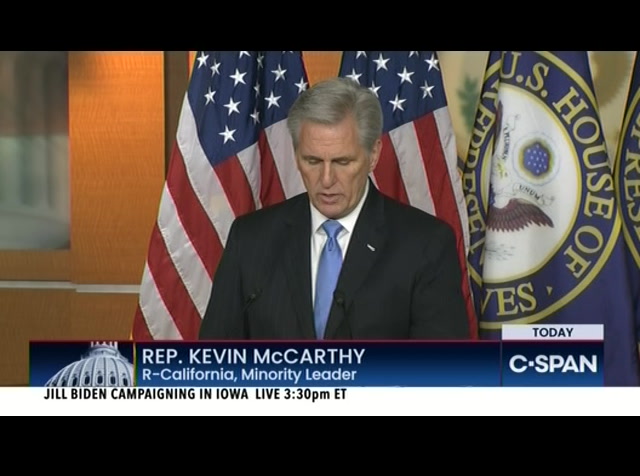 back to doing what the american people expect us to do? to me, i've sting watched a president just in the month, this week alone, have a meeting with foreign peace, about middle east sign an agreement with china that no one thought could sign an agreement of usmca that no one gave him the ability to get done, all making and stronger.r onemocrat majority only has thing to show -- a continuum investigation of this president working on what the american people expect us to do. today.n we have going along with the motto of this new democrat majority that blaming america irst, a debate on the floor about aumf, but doing it in a used that has not been and take it away in 100 years, a
3:23 pm 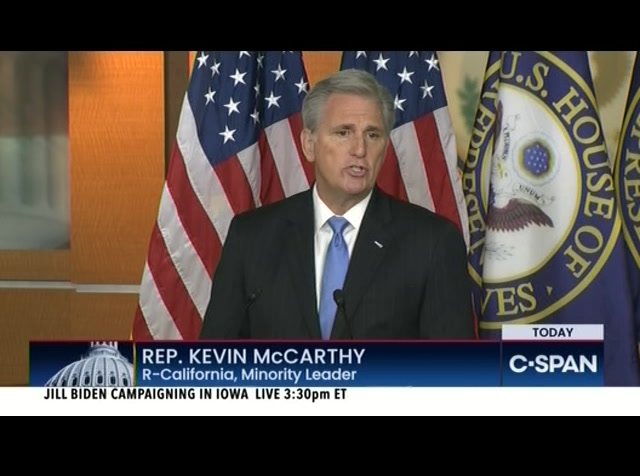 motion to recommit. a motion to recommit is one amendment to be used by the to make sure they have a voice. used as a voice on issues.t i think that's one of the most important issues we ever deal with. but ro khanna bragged about the dea that leader hoyer would be willing to change 100-year history and tradition of the not have to would debate. did they give the amendment that i put on the floor? no. that.committee denied they took a gold medal bill that on, gut anddy voted amended just to change the rules that you could debate something important. at the end of the day, if this any e law, if there was american that was kidnapped and we actually knew where they not send the navy seals in to save him.
3:24 pm 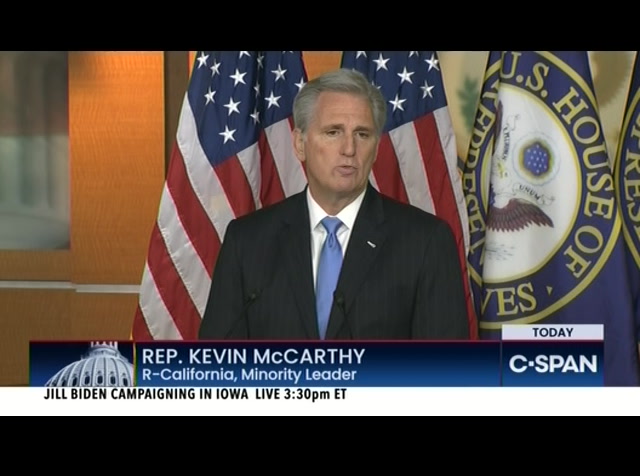 ship going chant through those waters, we could in.send if they were being attacked by the iranians, we could not protect them. or we had intelligence that the to attack re going york, we could not do anything. will be weaker. one of the reasons why we will be weaker, because this new democrat party, their dislike for president trump, hey are willing to change a century of tradition, simply to deny a people of vote. policy was so e strong, why wouldn't they allow debate, why wouldn't they allow why wouldn't they vote an m.t.r. that the republicans in the majority denied? i guess it just shows how weak are. ideas let's open it up for questions.
3:25 pm 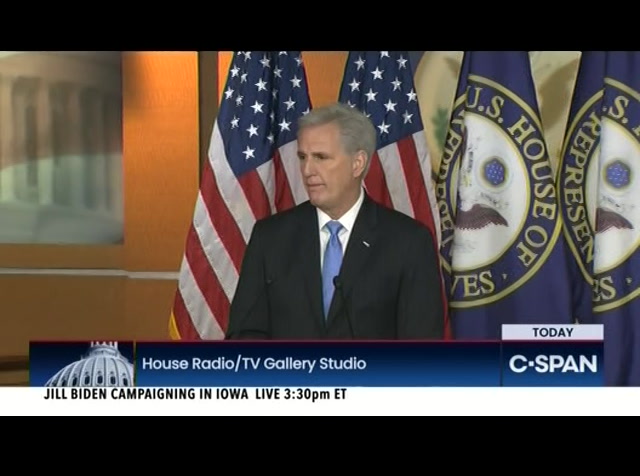 reporter: the trump administration refused the caucus on -- [inaudible] preventing the soleimani strike. law in the ndaa, do you think [inaudible] real carthy: i have concerns that that would ever go forward and tie the president's hands, that america would be weaker and it shows exactly that fact. you look at the soleimani attack that's deterrent happened inside iran, you listen general at the trayas, you just - petraeus, and you watched -- let's compare this. what's on the floor today, trying to tie the president's he had intelligence of what soleimani was going to do in the future, to deny him the to do it. we just watched two weeks ago young college students inside iran would not walk
3:26 pm 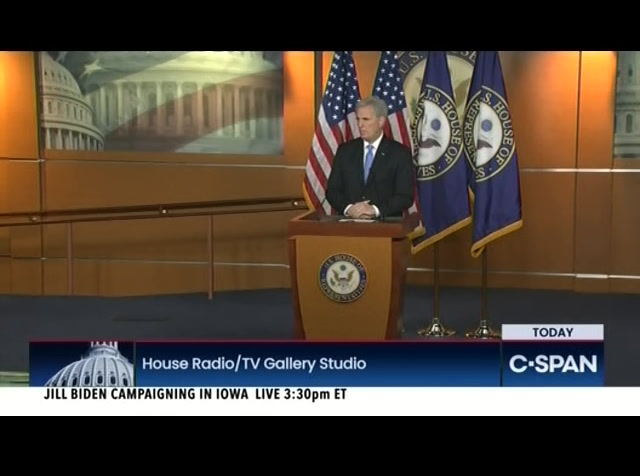 an america flag that their government put up. iran, id the enemy is in not america, the democrats ouldn't even let a resolution go. what message do you think that says to the world? nd just what you said, the policy itself is wrong. the process is different than deny done in 100 years to the right to even have debate about it, which you would like to have. worse? know what's the timing. they're sitting, trying to a president, and they're sending the wrong message to the regime. of will not send a message support to those who protest, who believe in the idea of freedom. down.ote that the protesters get a very clear message from the democrats. ut the regime gets an even clearer message from them. to continue to do what we had would do in the future. that is what's wrong with what's on today. reporter: yesterday, bernie sanders put out a statement
3:27 pm 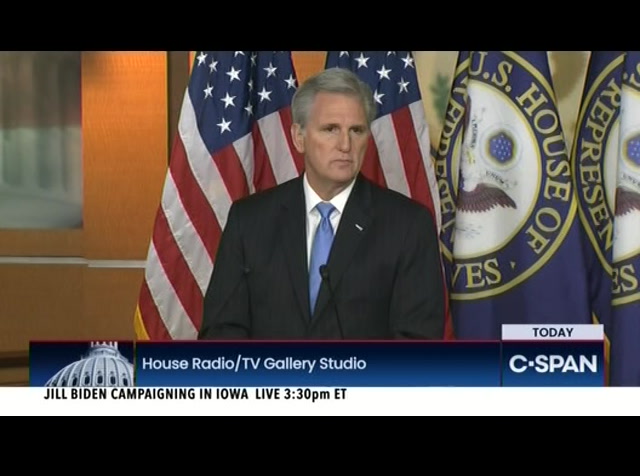 becomes the democratic nominee, if he becomes president, that he would begin renegotiating the usmca. he's hat concern you that making that threat and what message do you think that sends to your trading partner, canada mexico? mr. mccarthy: another reason why he shouldn't become president. an idea you will make america level playing field, every economist will tell you that our g.d.p. will be tronger, there will be more americans working. you know, he's true to his beliefs. at the same time the establishment in the democratic the , having holding papers. so here we are having an iowa week, bernie xt sanders couldn't -- hasn't been able to campaign along with the other senators. who has been there the whole time? joe biden. it's interesting that the democratic t of the party would do anything to try to stop bernie sanders. some ofey disagree with his ideas, too, but i guess he's urging in iowa, from what i
3:28 pm 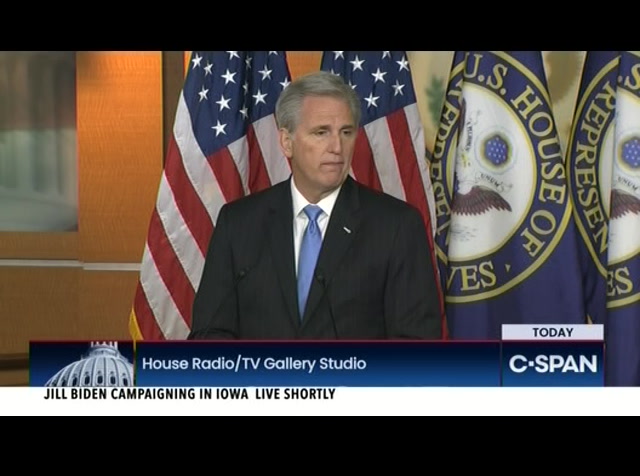 hear. >> last question. forward: dershowitz put a couple legal theories. one, monday, if a president has motive, he can't be impeached or removed. yesterday, he went further and said that that own e can be his re-election. that itself is good enough. be hat sense he could never removed from office, never be impeached. do you agree with that? r. mccarthy: you know, that's probably a question for dershowitz on his legal opinion. ae one thing i know i have as member of congress who does this rise to impeachment level? no. hat the president did was not wrong. it's not impeachable. >> you can find this online at c-span.org. now to joe biden's campaign office in cedar rapids, iowa. wife, jill biden, just
left
right
Borrow Program
tv