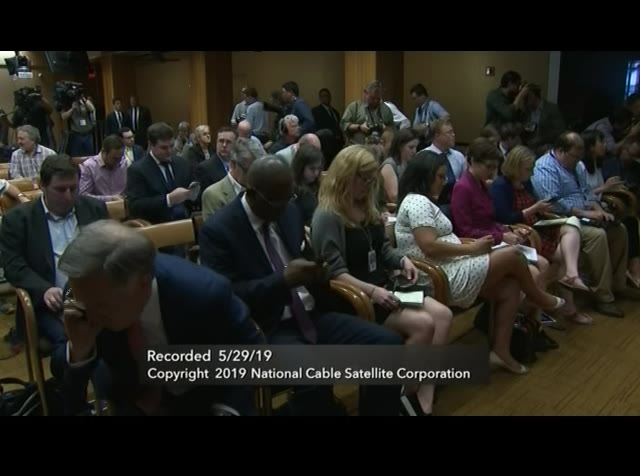 >> following robert e. lee statement, white house press secretary answered reporters questions for about 10. reporter: on mueller's statement today, do the statements differ? s differ? press sec. sanders: you would have to ask the department of justice, i am not sure about that. the point he already made in the report. we agree with him. collusion, there was no conspiracy, we consider this case closed. he completed his investigation. it is time for everybody to move on. he is going back to his private life and we think everybody else
9:22 pm 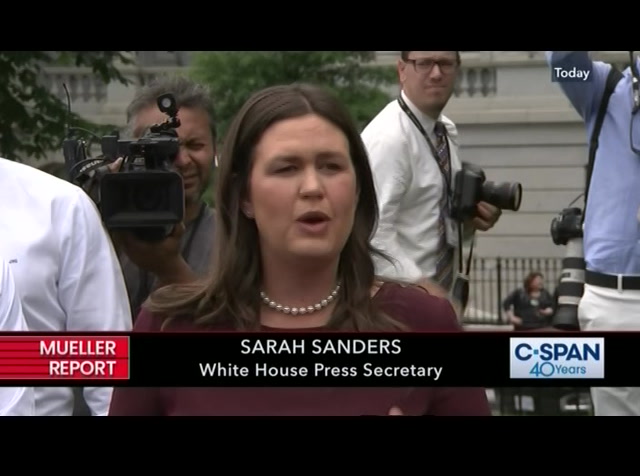 should, too. reporter: the president and you said case closed, but robert crime wasid if no committed, he would have said so. he didn't say so. press sec. sanders: if he had determined there was a crime, he would have had a moral obligation to report it. that he had anse investigation, the whole purpose of the special counsel was to make a determination on whether or not there was collusion. he came to a very explicit conclusion on that front that there was no collusion and no conspiracy. the good it make a determination on whether or not there was obstruction, which means that is up to the attorney general. based off of the exhaustive information laid out in the report that mueller himself but together, there was no obstruction, he worked with the attorney general to make a determination.
9:23 pm 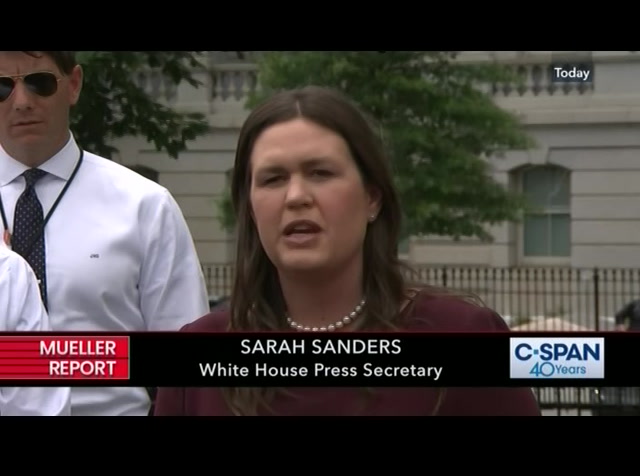 -- make that determination. the attorney general made that decision without the olc opinion being factored in. reporter: robert mueller said the constitution requires a process other than the commercial justice system to accuse a sitting president of wrongdoing. how then can the president going total exoneration? the processanders: would be for congress, but that is not necessary, because it's already been done. they spent two years and interviewed 500 people. over one million pages and documents and made the -- in documents and made the determination there was no collusion. that is the entire reason for the special counsel. just because democrats don't like the result of the 2016 election or the mueller report doesn't mean they get a do over. it is said they have no message or agenda and the hypocrisy of the process. what they are going through and what they are going to do to the country doesn't hurt the president, it hurts the american
9:24 pm 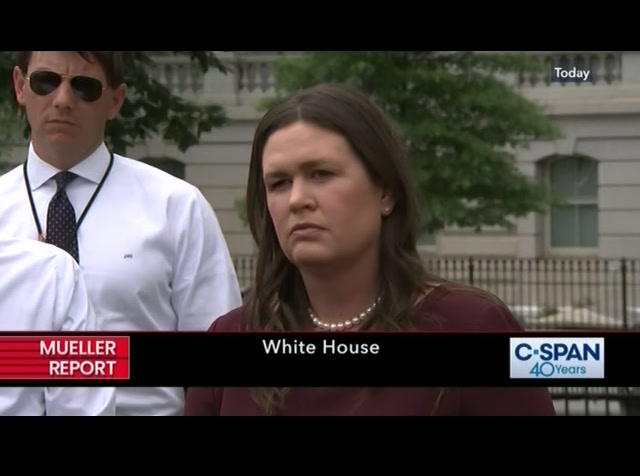 people. and that is unfair and they should be ashamed of themselves. one at a time. reporter: has congress -- did congress exonerate the president? press sec. sanders: we think the president has been fully and completely exonerated based on the fact that there was no collusion and there was no conspiracy and no obstruction. reporter: the president has repeatedly said no collusion, no instruction, but today he tweeted there was insufficient evidence. why did he change his characterization? press sec. sanders: he hasn't changed his position. we have been saying the same thing for two years before the mueller investigation even started. we knew there was no collusion or conspiracy and there's been no obstruction. we have been exposed lately clear and i probably said that phrase less than 1000 times standing here at this very spot. the message hasn't changed at all. reporter: you're saying congress has no reason to impeach the
9:25 pm 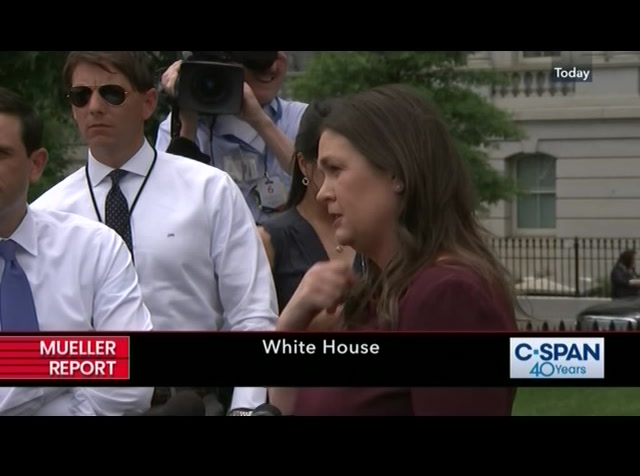 president. press sec. sanders: we are always repaired, but i don't think the american people deserve that. every single thing they are doing is taking away from things that could actually help the american people, and that is a great disservice. i think it is wrong for them to do that. reporter: does that mean there have been no meetings at the white house? press sec. sanders: i am not going to get into internal processes. we are going to move forward with what we think is important. reporter: if you want to look forward, what is this administration going to do to ,ake sure that in 2020 everybody has acknowledged russia hacked the elections in the benefit of donald trump,
9:26 pm 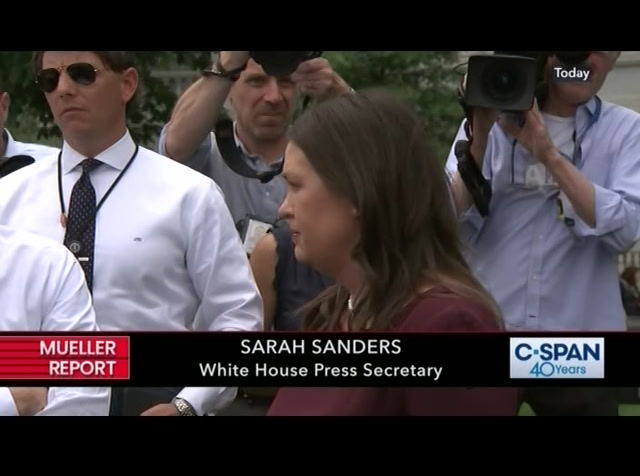 what is this administration going to do to make sure the 2020 elections are secure? press sec. sanders: we are going the previous administration did it, acknowledge there is a problem. didn't, acknowledge there is a problem. we will conduct elections in all 50 states and coordination between all 50 states to try to prevent this from ever happening again. and we it very seriously have taken a number of sets to make sure that we don't repeat the mistakes of the past. if donald trump were not the president, could he be charged with a crime? press sec. sanders: i think it is real simple. they were looking at whether or not there was collusion, that would be the crime that would have been committed. all of those things have been determined to not have taken place. collusion, conspiracy, of structure, and again, we consider this very much to be
9:27 pm 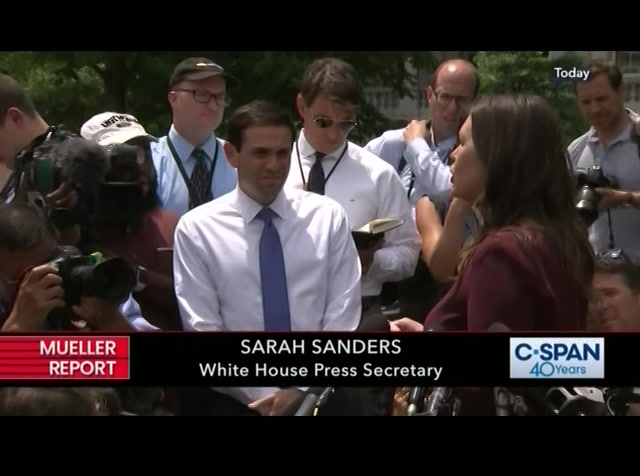 case closed. insufficientwas evidence, therefore he is innocent. press sec. sanders: we set the bar at the fact that mueller spent two years ended an exhaustive investigation and came back to say that there was no wrongdoing. , that should be something to be celebrated, not questioned. we should be glad and thankful the united states did not have a single person that was part of a collusion conspiracy to interfere with our elections. that is a great thing. that is a good thing in america. it is said democrats don't realize that -- sad democrats don't realize that. reporter: we are hearing from you today no collusion, no conspiracy, but the white house does not acknowledge the report didn't specifically say no obstruction. press sec. sanders: we have been very clear that the whole
9:28 pm 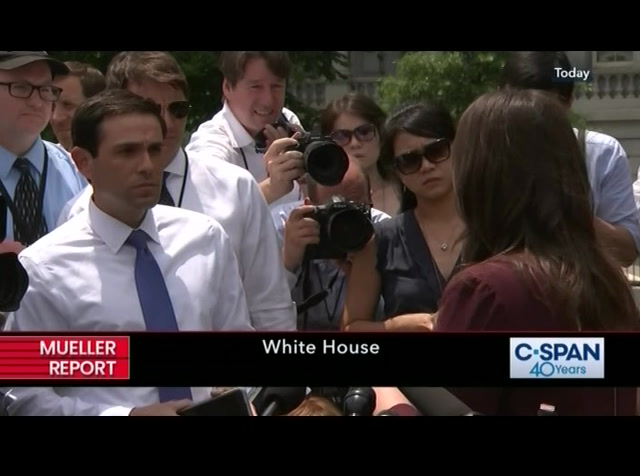 purpose of the mueller investigation was to determine whether or not there was collusion. he determined there was no collusion. he further determined he did not have enough information to make that decision. it goes to the attorney general, and along with the deputy attorney general, they made that determination and confirmed her was no instruction -- no obstruction. reporter: a lot of people just bill barr over a nonpartisan member and robert mueller. press sec. sanders: we are not asking you to. robert mueller did 400 pages and laid it all out. the attorney general made his decision based on mueller's information, everybody eats forgetting that. the entire decision was based on mueller's report and the information he laid out. he couldn't make a determination , so it goes to the next step in the process, and they confirmed her was no obstruction. -- there was no obstruction. reporter: was mueller's statement today fair?
9:29 pm 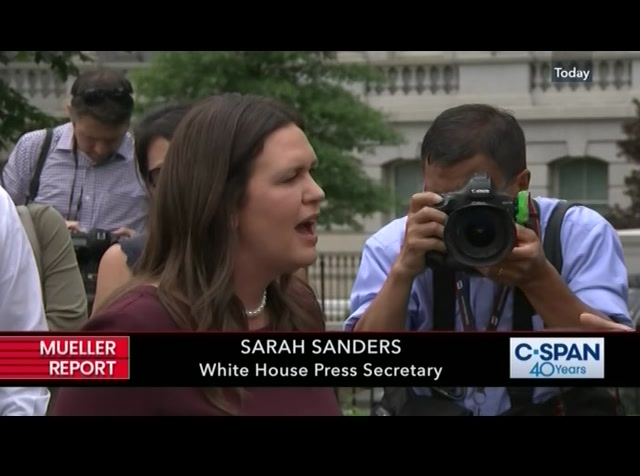 press sec. sanders: mueller's statement -- whatter: you just laid out this administration has been doing to prevent russian interference at the core of this whole thing in the first place. reporter: why haven't we heard any of that from president trump himself? press sec. sanders: he literally had his entire team that is working on this process. he instructed our team to go out and layout what we are doing to protect from not just russian interference, but any interference from any government or otherwise. he said it a number of times. there was interference and that we are taking steps from it happening again. you guys constantly want to attack this president, but the reason we are in the stuff in the first lease is because the first administration -- the previous administration failed to do their job.
9:30 pm 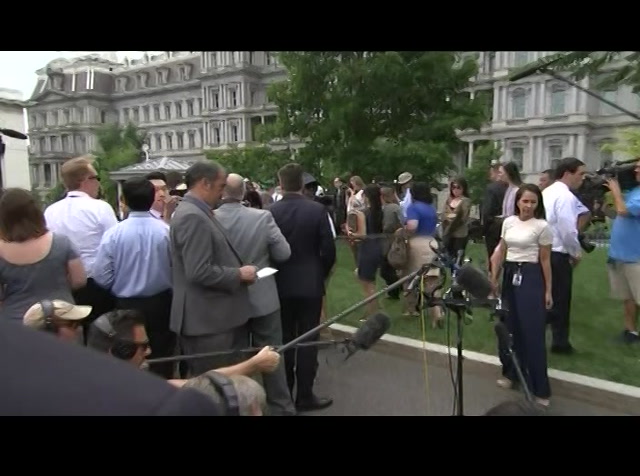 congressman a mosh said he interpreted the report as fact. what is your response to what the congressman said? since he made his statement -- press sec. sanders: i don't think the congressman is worth the time in the white house. i will let the president make the -- [indistinct chatter] >> here is more now.
left
right
Borrow Program
tv

White House Press Secretary Sarah Sanders talked to reporters at the White House following a statement made by Special Counsel Robert Mueller, saying the case was closed and there was no collusion between President Trump's campaign and Russia. She added that if there was a crime, Mr. Mueller would have had a moral obligation to report it.