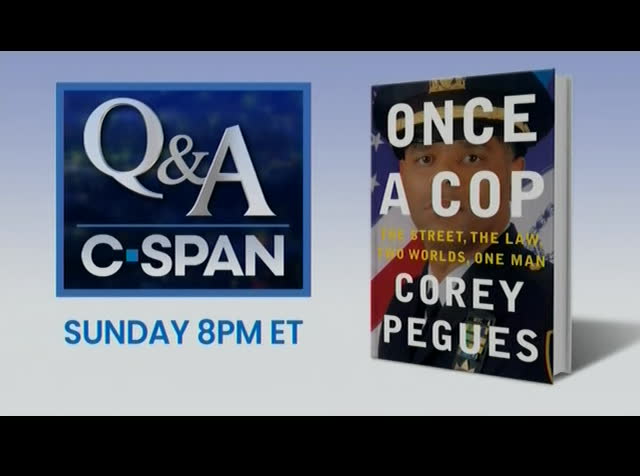 and met some friends and they were selling drugs, so it was like the thing to do. >> sunday night at 8:00 p.m. eastern on c-span's q & a. yesterday president trump ordered federal agencies to turn over citizenship documents and data to the commerce department after the supreme court recently ruled against the administration's efforts to add a citizenship question to the 2020 census. the president spoke about his latest action from the white house rose garden alongside attorney general william barr and commerce secretary wilbur ross. thank you very much, everyone. are you a citizen of the united
9:17 am 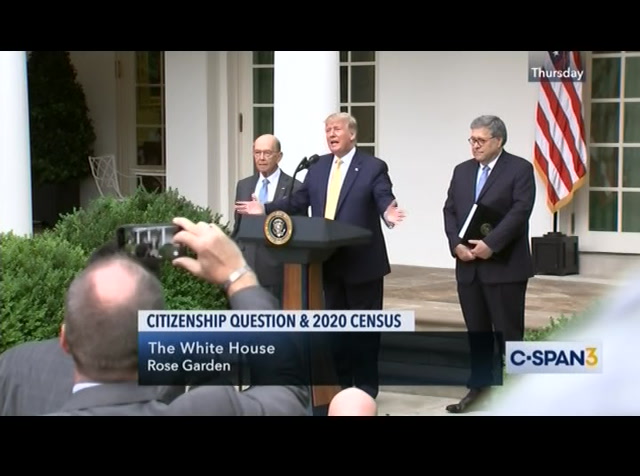 states of america? oh, gee, i'm sorry, i just can't answer that question, and that's after spending billions and billions of dollars. there used to be a time when you could answer questions like that very easily. there used to be a time when you could proudly declare i am a citizen of the united states. now they're trying to erase the very existence of a very important word and a very important thing, citizenship. they're even coming after the pledge of allegiance in minnesota. i'm proud to be a citizen. you're proud to be a citizen. the only people who are not proud to be citizens are the ones who are fighting us all the way about the word citizen. today i'm here to say we are not backing down on our effort to determine the citizenship status
9:18 am 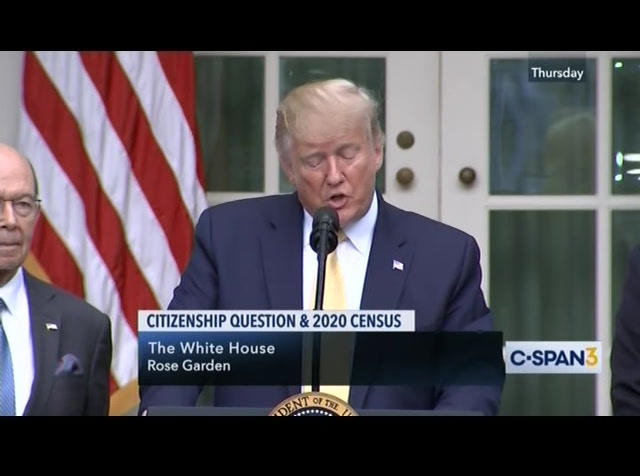 of the united states' population. i stand before you to outline new steps my administration is taking to ensure that citizenship is counted so that we know how many citizens we have in the united states. makes sense. we will defend the right of the american people to know the full facts about the population, size of citizens and noncitizens in america. it is essential that we have a clear breakdown of the number of citizens and noncitizens that make up the u.s. populations. imperative. knowing this information is vital to formulating sound public policy, whether the issue is healthcare, education, civil rights or immigration, we must have a reliable count of how many citizens, noncitizens and illegal aliens are in our country. the department of commerce sensibly decided to include a
9:19 am 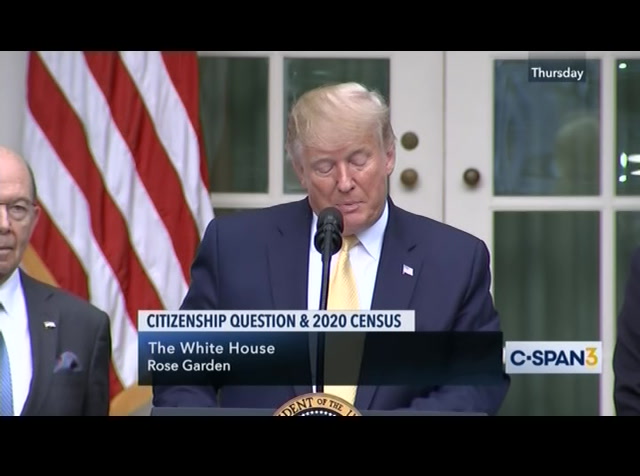 citizenship question in the 2020 census, as has been done many, many times throughout the history of the united states. unfortunately, this effort was delayed by meritless litigation. as shocking as it may be, far left democrats in our country are determined to conceal the number of illegal aliens in our midst. they probably know the number is far greater, much higher than anyone would have ever believed before, maybe that's why they fight so hard. this is part of a broader left wing effort to erode the rights of the american citizen and is very unfair to our country. the supreme court ultimately affirmed our right to ask the citizenship question and very strongly it was affirmed, but the supreme court also ruled that we must provide further explanation that would have
9:20 am 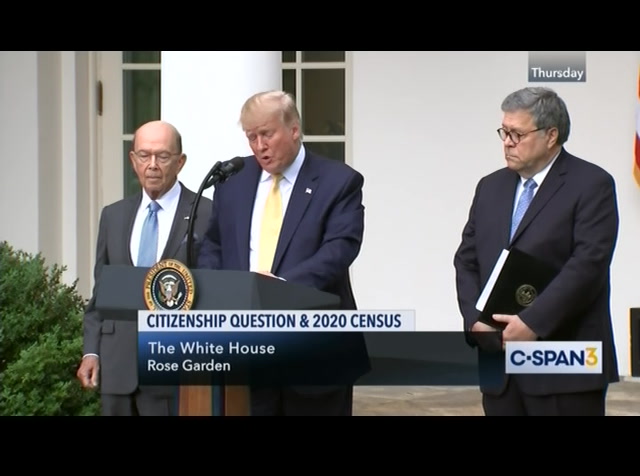 produced even more litigation and considerable time delays. the case is already in three federal district courts that happen to be totally honest, extremely unfriendly to us. these delays would have prevented us from completing the census on time. it's deeply regrettable but it will not stop us from collecting the needed information and i think even in greater detail and more accurately. therefore, we are pursuing a new option to ensure a complete and timely count of the noncitizen population. today i will be issuing an executive order to put this very plan into effect immediately. i am here by ordering every department and agency in the federal government to provide the department of commerce with all requested records regarding the number of citizens and noncitizens in our country. they must furnish all legally
9:21 am 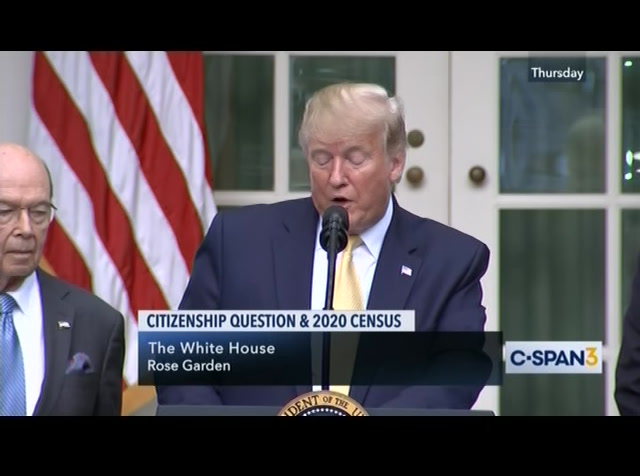 accessible records in their possession immediately. we will utilize these vast federal databases to gain a full, complete and accurate count of the noncitizen population, including databases maintained by the department of homeland security and the social security administration. we have great knowledge in many of our agencies. we will leave no stone unturned. the census bureau projected that using previously available records it could determine citizenship for 90% of our population or more. with today's executive order which eliminates long standing obstacles to data sharing, we're aiming to count everyone. ultimately this will allow us to have an even more complete count of citizens than through asking the single question alone. it will be, we think, far more
9:22 am 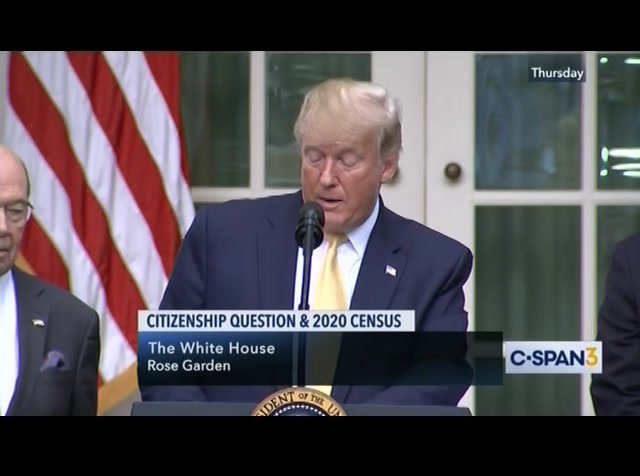 accurate. the venn suss bureau can use this information along with information collected through the questionnaire to create the official census. others, as a result of today's executive order, we will be able to ensure the 2020 census generates an accurate count of how many citizens, noncitizens and illegal aliens are in the united states of america. not too much to ask. this will greatly inform a wide array of public policy decisions. this information is also relevant to administering our elections. some states may want to draw state and local legislative districts based upon the voter eligible population. indeed the same way the supreme court handed down the census decision, it also said it would not review certain types of districting decisions which could encourage states to make such decisions based on voter
quote
9:23 am 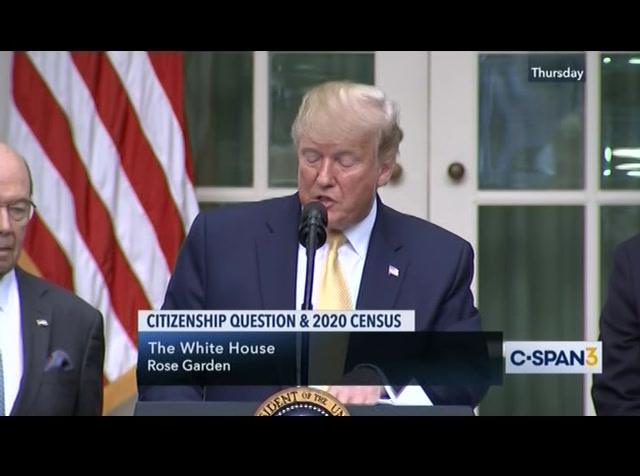 eligibility. with today's order we will collect all of the information we need to conduct an accurate census and to make responsible decisions about public policy, voting rights and representation in congress. in everything we do we will faithfully represent the people of the united states of america. i would like now to introduce attorney general bill barr to the podium. thank you. >> good evening. thank you, mr. president, and congratulations on today's executive order which will ensure that we finally have an accurate understanding of how many citizens and noncitizens live in our country. as the supreme court recognized, it would be perfectly lawful for the federal government to ask on the census whether individuals are citizens of the united
9:24 am 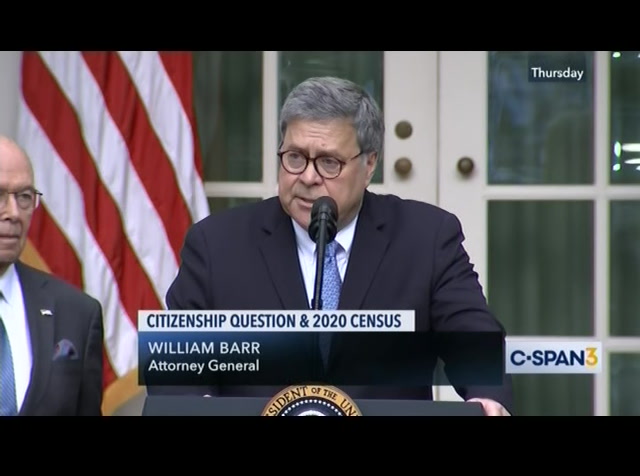 states. and it's entirely reasonable to want to know how many citizens and noncitizens there are in the united states. in fact, the federal government has routinely asked questions relating to citizenship ever since the 1820s, but while the supreme court correctly recognized that it would be entirely appropriate to include citizenship questions on the census, it nevertheless held that the commerce department did not adequately explain its decisions for doing so on the 2020 census. because as the supreme court recognized, the defect in the commerce department's decision was curable with a better record, the president asked me to work with secretary ross to determine whether there remained a viable path for including a citizenship question on the census. i did so. in my view the government has ample justification to inquire
9:25 am 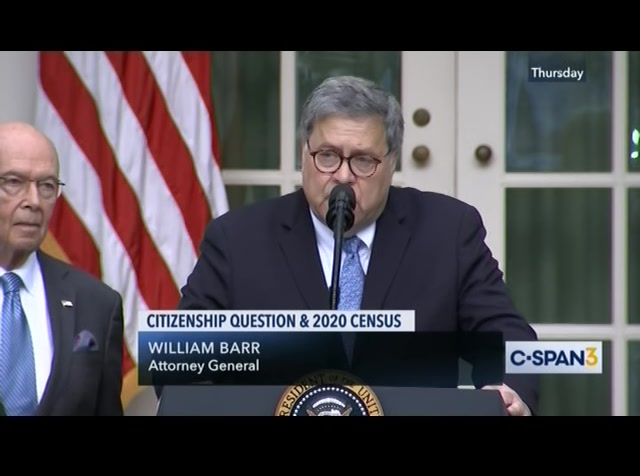 about citizenship status on the census and could plainly provide rationales for doing so that would satisfy the supreme court. therefore, there is no question that a new decision to add the question would ultimately survive legal review. the problem is that any new decision would be subject to immediate challenge as a new claim in the three ongoing district court cases. in addition, there are injunctions currently in place that forbid adding the question. there is simply no way to litigate these issues and obtain relief from the current injunctions in time to implement any new decision without jeopardizing our ability to carry out the census, which we are not going to do. we're not going to jeopardize our ability to carry out the census. so as a practical matter, the
9:26 am 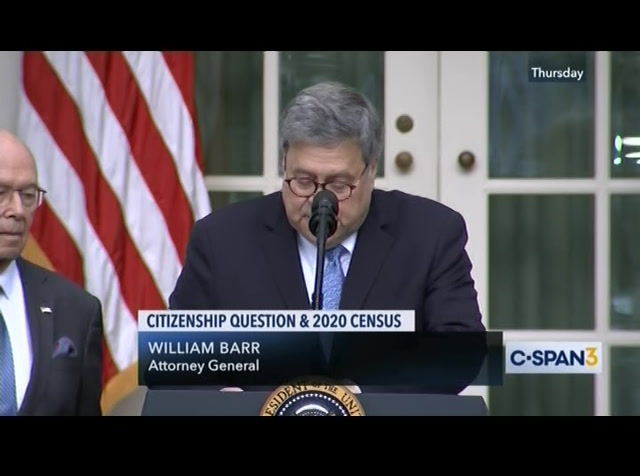 supreme court's decision closed all paths to adding the question to the 2020 census. put simply, the impediment was not -- was a logistical impediment, not a legal one. we simply cannot complete the litigation in time to carry out the census. one other point on this. some in the media have been suggesting in the hysterical mode of the day that the administration has been planning to add the citizenship question to the census by executive fiat without regard to contrary cord orders or what the supreme court might say. this has been based on rank speculation and nothing more. as should be obvious, there has never been -- this has never been under consideration. we have always accepted that any new decision to add a citizenship question to the census would be subject to
9:27 am 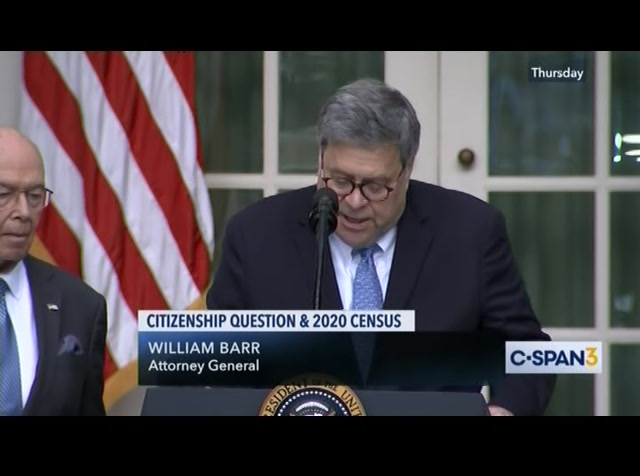 judicial review. turning to today, i applaud the president for recognizing in his executive order that including a question on the census is not the only way to obtain this vital information. the course the president has chosen today will bring unprecedented resources to bear on determining how many citizens and noncitizens are in our country and will yield the best data the government has had on citizenship in many decades. that information will be used for countless purposes as the president explained in his remarks today. for example, there is a current dispute over whether illegal aliens can be included for a portionment purposes. depending on the resolution of that dispute, this data may be relevant to those considerations. we will be studying this issue. congratulations, again, mr. president, on taking this effective action.
9:28 am 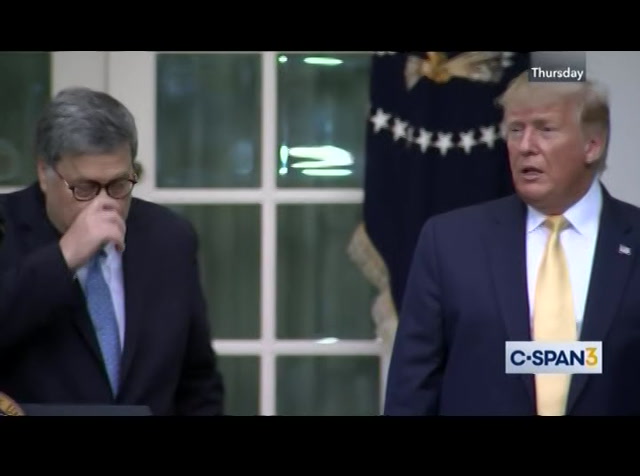 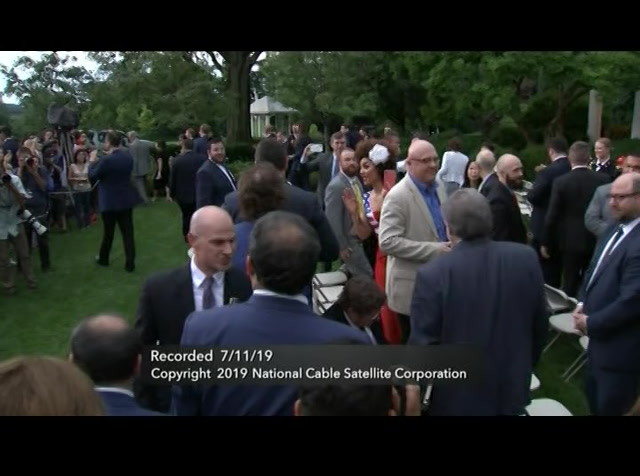 the energy subcommittee is looking into threats to the u.s. power grid. today members will hear about the federal government's efforts to secure the electric grid from cybersecurity risks. officials from the energy department and energy regulators along with a representative of the electric utility providers will be answering questions today. this is live coverage on c-span 3.
9:30 am 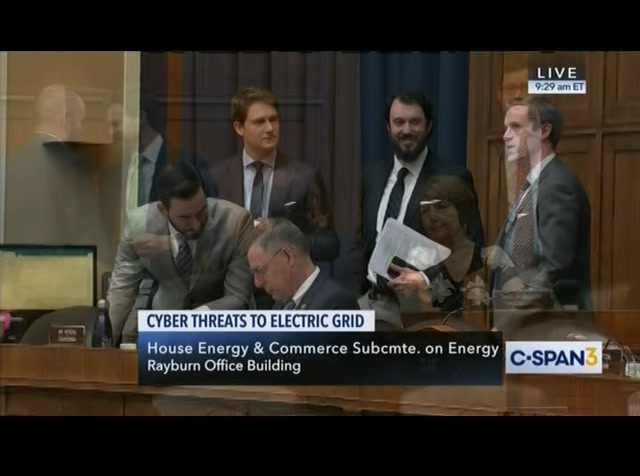 President Trump ordered all federal agencies to turn over documents and data regarding the number of non-citizens in the U.S. to the Commerce Department. He issued the executive order after the Supreme Court ruled against the administration's efforts to add a citizenship question to the 2020 census.