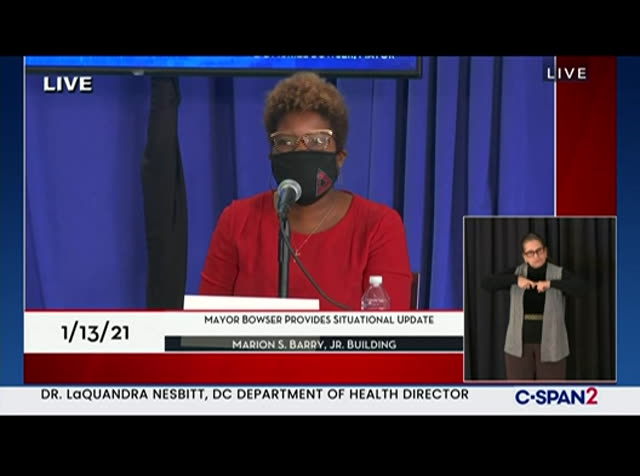 our input. to continue our cause through this period of time we are in this additional emergency, we will continue to observe trends through that time. >> thank you. >> you are watching c-span2, your unfiltered view of government. c-span2 was created by america's cable television companies and brought to you by these solution companies who provide c-span2 to viewers of the public service. >> weeknights, booktv programs, preview of what is available every weekend on c-span 3. tonight we look at the life and legacy of john f. kennedy, university of maryland washington history professor emeritus william crowley discusses kennedy's presidency and the myth that surrounded him.
11:52 am 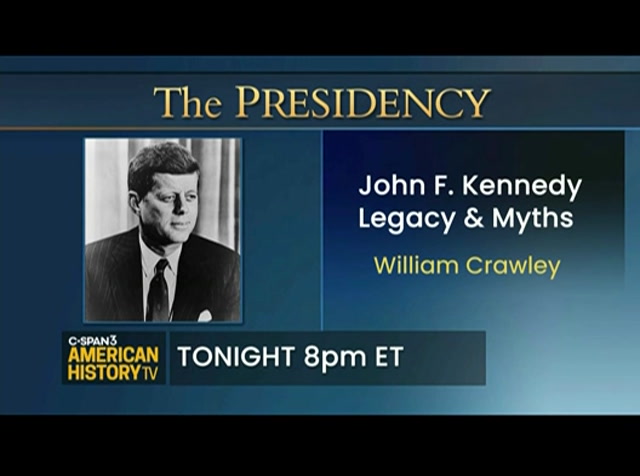 the talk is in the great live lecture series at 8:00 pm eastern. and enjoy american history tv every weekend on c-span 3. >> james wallner joins us with what a 50/$0.50 would mean for the biden administration. your earlier career you work on capitol hill, you live on capitol hill. your thoughts on the events of last wednesday. >> like many millions of other americans i was shocked, still unpacking it in to see such a sacred space defiled in that way was truly shocking to me and it really was a sad day and a tragic day for all americans. >> one of the topics you study is the institution of the senate, getting a warp speed lesson on fools of the senate especially when it comes to impeachment trial in a very
11:53 am 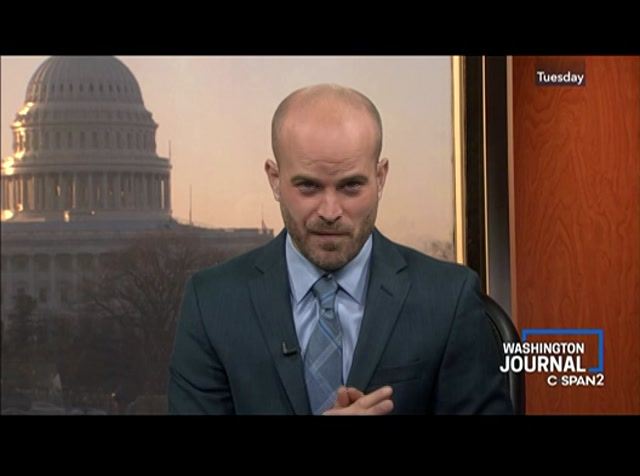 short window. what is your read on whether democrat in the house say they will impeach the president this week, can a senate trial be held in the time frame before donald trump leads office? >> the first thing i learned is anything is possible in the senate but it is important to acknowledge it is very very difficult. right now the senate procedural partner will bar it from starting in impeachment trial if the house passes articles of impeachment prior to january 20th at 1:00 pm, that is one hour after president-elect joe biden is sworn into office and donald trump leaves office. there are several complications. the senate can agree to waive the current procedural posture by unanimous consent, that will take the agreement of 100 senators and there has been discussion of having a trial after donald trump leaves office, that would be relatively unprecedented.
11:54 am 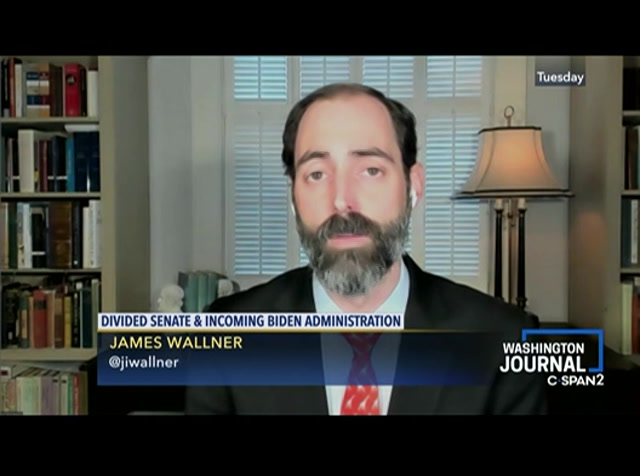 it is only happened twice before in american history. the first impeachment trial of north carolina senator william blunt and the impeachment trial of the secretary in the president's cabinet. in both of those instances there was no conviction and it is literally unprecedented for the senate to convict an official who is no longer in office of the charges in an article of impeachment. >> a tree of republican senators in your time on capitol hill. what is your read on republican senators, to convict on impeachment charges? >> it could be closer than it was earlier this time last year but it is not clear there are two thirds of the senate who are willing to vote to convict. i suspect once the president leaves office and is no longer the president and no longer capable of being removed from office you get into unprecedented territory i suspect the climate will shift
11:55 am 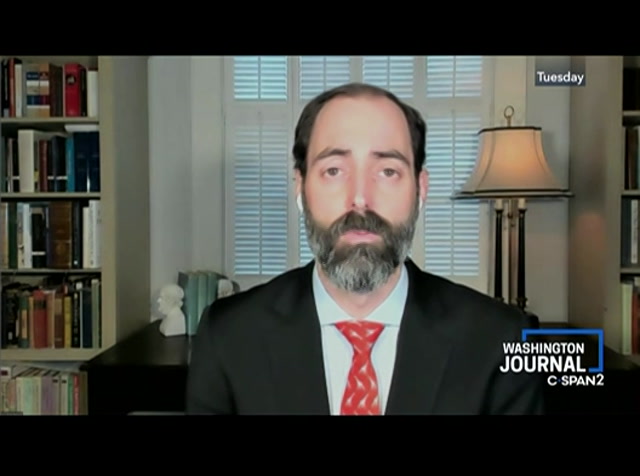 a bit and you will have fewer republicans who will vote to convict the former president in that instance and you will also have many democrats scratching their heads wondering why they are chewing up valuable floor time and agenda time during president biden's first 100 days of unified government to litigate and adjudicate these past deeds with the former president. >> unified government will start january 20th at noon. when is the last time such slim majorities in the house and senate, 50/50 split in the senate, 11 seat majority in the house for democrats. >> these narrow partisan majorities with unified government are more or less the norm, we do have unified government these days. that being said last time you had a 50/50 split in the senate which is the narrowest of narrow margins was in 2001, of
11:56 am 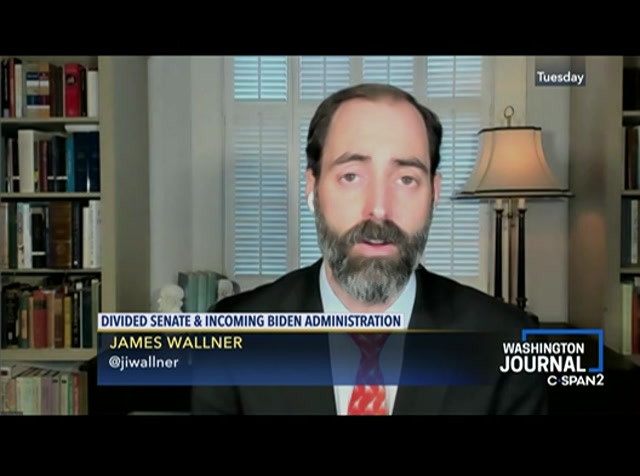 51 votes, 50/50 split doesn't happen very often. to my knowledge it is only the third time in american history we have seen a 50/50 split. >> what should viewers know about how the senate is run during a 50/50 split? >> guest: the first thing the senate has to do is organize itself. ruled 25 sets of the standing committees, the committees are the workhorses of the congress. they have members who continue in those spots and new members come in and have to be added to committees. if you have a change in party control the majority party has more seats on that committee so they have to organize the chamber and organizing the chamber simply means members of the committees, studying the ratios to favor the majority party and approving higher funding for the majority party and if necessary new office space, when you have a 50/50
11:57 am 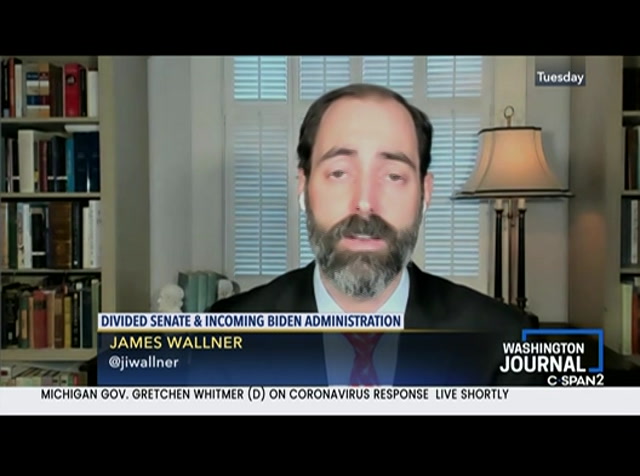 split it is hard, and it can be filibustered. minority parties filibuster the organizing resolution and adds another complication for party leaders in this day and age, and these things usually pass once they are agreed to when the compromises locked in. >> chuck schumer will be majority leader in the senate and it was last week before the attack in the capital when he was talking with reporters asked several questions about the senate agenda that he will do a leader of the agenda and wants to play minute of chuck schumer from early wednesday last week. >> a larger package. >> as i told you it is one of the first things we want to do. our georgia senators campaigned on it. our caucus is ford and american
11:58 am 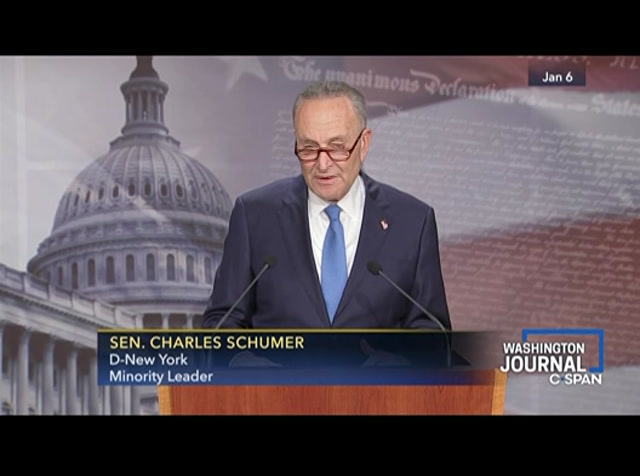 people need it. >> how does this change the calendar? the way forward on nominees? >> obviously with democratic control the ability of joe biden to move nominations forward will be easier. the calendar i haven't begun to look at yet. last one. >> the moment you found out you would be the majority leader and progressives are still pushing you to use the filibuster. can you make a promise right now? >> we senate democrats know we face some of the -- one of the greatest crises americans have, we are united and wanting big bold change and we are going to sit down at the caucus and discuss ways to get that done. >> this comments from chuck schumer on several fronts, more stimulus to nuking the legislative filibuster.
11:59 am 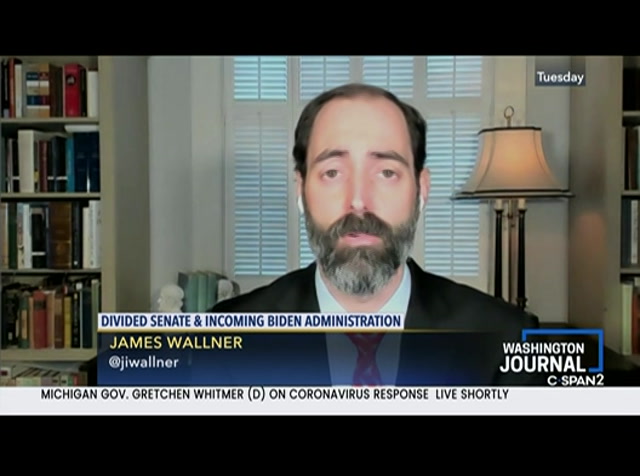 >> there is so much in these comments that illuminate how the senate will operate and why it will operate pretty much like the senate has operated in the past. you heard the last thing the future majority leader said was we are going to sit down as a caucus and that under the scores that the senate floor is no longer an arena where these are adjudicated and made, they are made in party lunches, by party members themselves meeting in caucus together and then they make a decision and come out of those lunchs and go forward, lineup and try to get their agreement through and i don't expect that to change. if you look at the nomination record for the last four years and the last two years, the bulk of the nominees, judicial nominees have been confirmed on a bipartisan basis and if nominations are confirmed, they are scheduled for the floor in consultation with the minority and majority leader, chuck schumer and mitch mcconnell and
12:00 pm 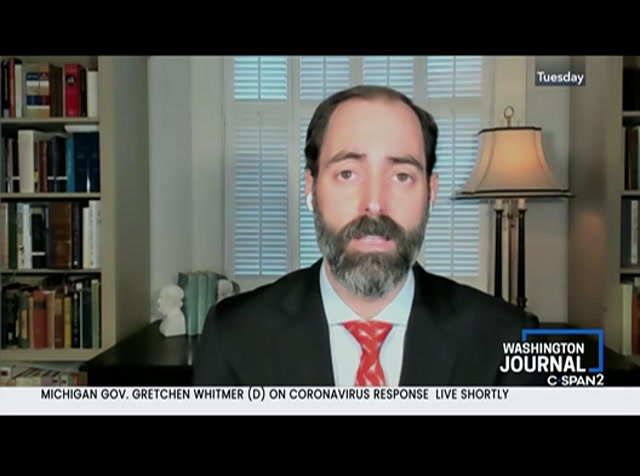 in september prior to the november election senate republicans spend the bulk of their time processing judicial nominee supported by democrats who overwhelmingly had a majority of republicans and so the rhetoric surrounding the judicial nomination process doesn't match reality. ..i expect that process to continue to be fairly agreeable. you will have hot button controversial supreme court nominee seats and maybe an appellate seat every now and then. almost 80% of the judicial nominations, i expect to see cooperation. with regards to the filibuster and the nuclear option, chuck schumer is in a difficult spot. if you look at the rhetoric su surrounding the georgia election on both sides -- >> life commission governor gretchen whitmer on her states response to the coronavirus pandemic. you are watching
left
right
Borrow Program
tv