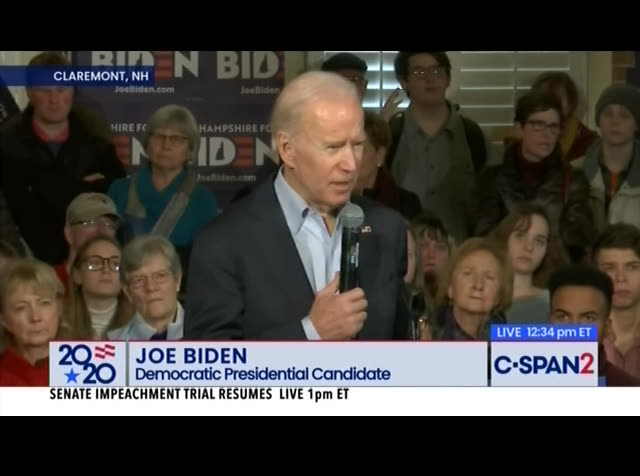 country divided and two, a world in disarray. there will be no time for on-the-job training, none we will need a president who is ready on day one to command the world stage can lead our armed forces, be the commander-in-chief, , rally our allies and once more make the united states not only the physical leader but the moral leader of the free world. they have to be able to do it from the beginning. you need a president who knows this country -- >> we will leave this event with joe biden for just a minute and try to come back to it taking you like to do a briefing with house impeachment managers who arrived for the trial. >> the facts that apply to that law when it concerns article one the president abuse of power,, abuse of his office to coerce ukraine into helping them cheap the next election. we are going to conclude that section on article one so we will conclude early this afternoon the constitutional
12:36 pm 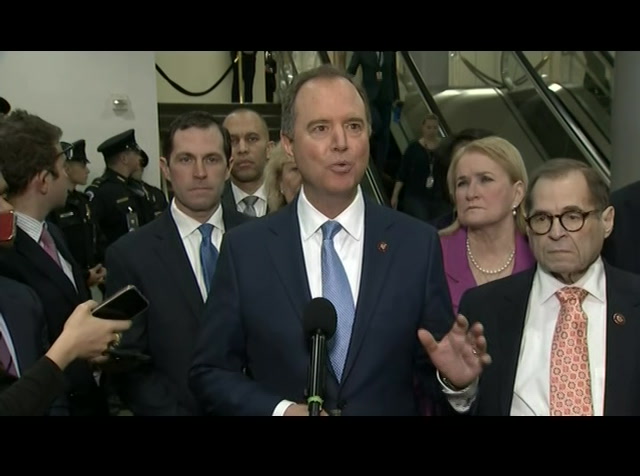 analysis of why those actions betraying our national security violate the constitution and require his removal. we will then go into article to the obstruction of congress article, and also let out how the constitution and the facts compel his conviction and removal from office and then we'll have our conclusion for the day. tomorrow we expect the president's team will begin their presentation. we don't know how long that will go but i do want to address one issue that the president's team has been pushing out not in the senate chamber but evidently everywhere else, and that is their last refuge, the last refuge of the republican -- not the republican, of the president's team effort to conceal the evidence from the american people. and that is this claim of executive privilege. now, we urged at the beginning of the trumpet any witnesses be resolved at the beginning of the
12:37 pm 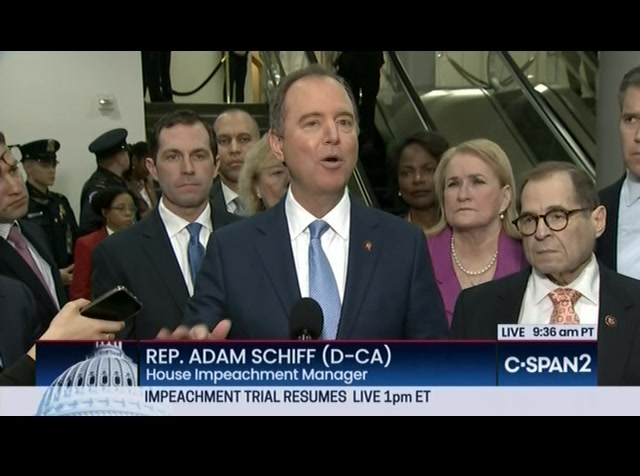 trial. the president's team wished to push that off as did senator mcconnell so that later in the process they could say if we were entertained those questions that it was something take. that's nonsense. this is not a trial or a speeding ticket or shoplifting. this is an impeachment trial involving the president of the united states. these witnesses have important first-hand testimony to offer. the house wishes to call them in the name of the american people and the american people overwhelmingly want to hear what they have to say. now unlike in the house where the president could play rope-a-dope in the courts for years, that is not an option for the president's team here and it gives no refuge to people who want to hide behind executive privilege to avoid the truth coming out. we have a very capable justice sitting in that senate chamber and powered by the senate rules to decide issues of evidence and
12:38 pm 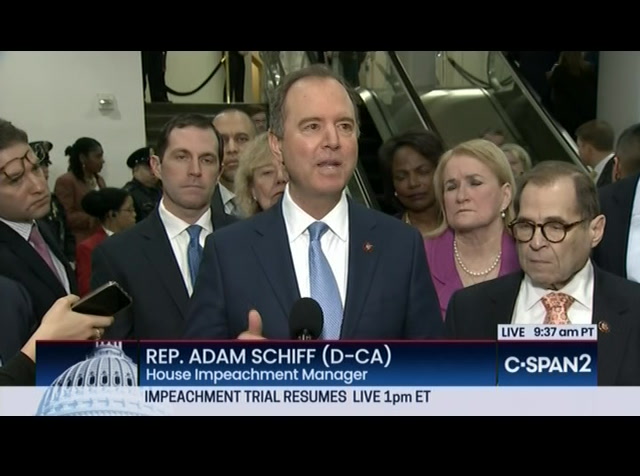 privilege. answer any of these witnesses have a colorful claim to wish to make for the president on their behalf we have a justice who is able to make those determinations and we trust that the chief justice can do so. the senate will always have the opportunity to overrule the justice, but what they fear with the president teams here is that the justice will, in fact, apply executive privilege to that very narrow category where it may apply. and here that category where maybe nowhere at all because you cannot use executive privilege to hide wrongdoings or criminality or impeachable misconduct. and that is exactly the purpose for which they seek to use it. and finally, they have withheld hundreds and hundreds and hundreds of documents for which there is no colorful claim of privilege. several of the witnesses that we
12:39 pm 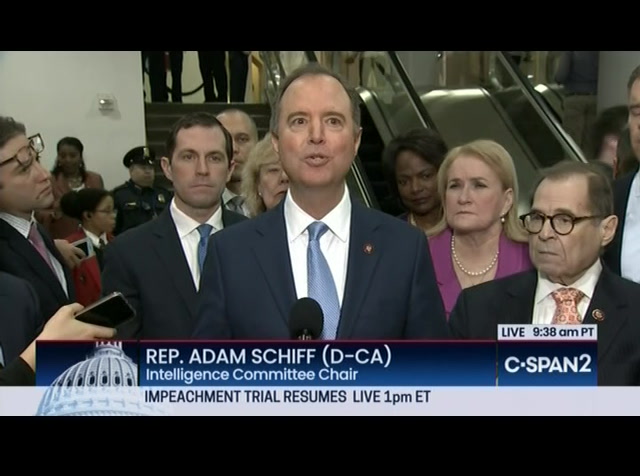 seek to call have no even colorful claim of privilege. this is merely the latest camouflage and merely the latest effort to obstruct the congress in its investigation and now to obstruct the senate in the trial. i'm happy to respond to a couple of questions. >> abc reviewed audio that appeared to show the president at a dinner in 20 did speaking about ambassador yovanovitch saying quote take her out. your reaction. >> i saw that newspaper report or abc report at a don't have enough background really to give you a response to it at this time. but plainly if the president at the urging of giuliani or parnas and froom and, if this is additional evidence of his involvement, then that effort to smear her, it would certainly corroborate much of what we've heard that i'm not an position yet to analyze that not having look at it. >> how important to your argument would be the question
12:40 pm 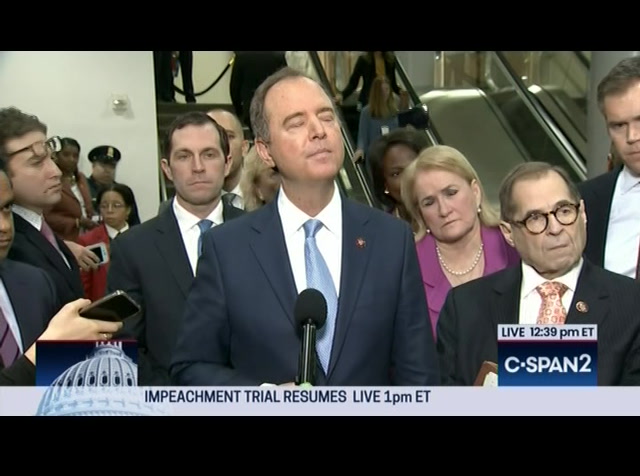 of setting a precedent here that future congress would not what you see the president behave in way entrance of locking subpoenas? >> it's very important and that's a good question for me to end on. it's vital in two two respect. first, on article one, if we're prepared to say that it president of the united states can withhold military aid from an ally, can withhold official acts like like a white house mg in order to essentially coerced or extort help to cheat in the next election, then it is just open territory for any president who comes in the future and, of course, as an open invitation for this president to continue as you shown every willingness to do at first to solicit foreign intervention in our election. americans should decide american election. the president would be sending is terrible, , terrible. but in terms of the obstruction the president would be equally devastating because it would
12:41 pm 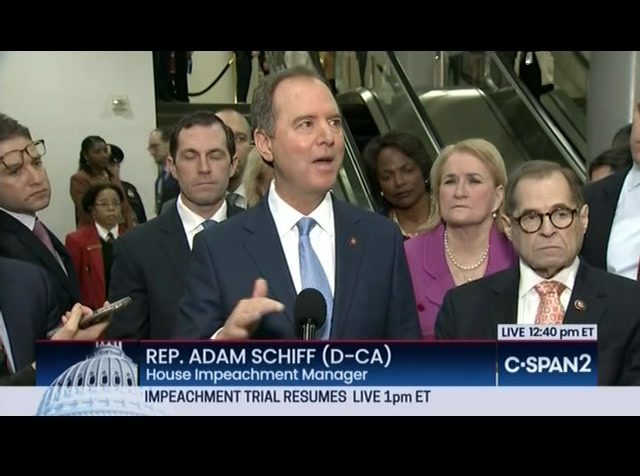 mean that the impeachment power is essentially a nullity. it's unenforceable. the president can always the late it into nonexistence. and this goes not just to impeachment investigations. if the senate goes along with the president's obstruction, it will in every way impede the house, mp dissent in its own responsibility. what president would feel compelled to answer any senate subpoena in the future this president considers a will fight all subpoenas? and if this congress were to ratify that kind of misconduct? thank you. >> a reminder, the impeachment trial of president trump begins at 1 p.m. eastern today. live coverage here on c-span2, c-span.org/impeachment or you
left
right
Borrow Program
tv