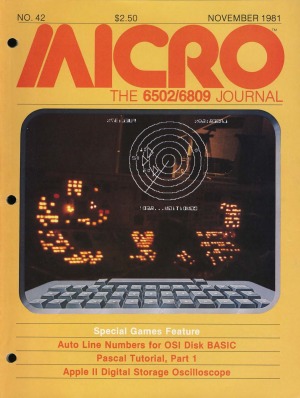 MICRO: the 6502 Journal was a 6502-specific magazine published by Robert M. Tripp.

DESCRIPTION
MICRO: the 6502 Journal was a 6502-specific magazine published by Robert M. Tripp.

From apple2history.org description of MICRO 6502 Journal:

Robert M. Tripp got his start with computers in 1960 as an undergraduate in an unrelated field. He found the computer programming so interesting that he became a programmer in 1969, and started with the 6502 microprocessor in 1976, initially with the KIM-1 trainer sold by MOS Technology. He started a business, “The COMPUTERIST”, and sold the KIM-1 computers, as well as software and accessories for it. He started a magazine under the umbrella of his business, and named it Micro. It began publication in October of 1977, and was released on a bimonthly basis initially, going monthly in February of 1979. The first three issues were printed using his KIM-1 and he did the paste-up for the magazine on his kitchen table. He later began to use a local publishing company to create the magazine. By early 1980 the publisher name had changed to MICRO-INK, Inc.

The magazine covered the 6502 microprocessor (and later the 6809) in all the various computers that used it, including the KIM-1, the AIM-65, the C1P, the Commodore PET, the Ohio Scientific, the Atari 800, and, of course, the Apple II. It was an excellent source for machine level code for the 6502, eventually including more and more articles that applied specifically to the Apple II. Ultimately, about half of the articles in each issue dealt with the Apple II.

Many general-purpose machine language articles appeared in its pages, such as “Improved nth Precision” (code optimization for the 6502), “Precision Programming”, and “Computer Assisted Translation Of Programs From 6502 to 6809″. They also carried do-it-yourself hardware articles, such as “C1P To Epson MX-80 Printer Interface”, “PET/CBM IEEE 448 To Parallel Printer Interface”, and “Apple II Digital Storage Oscilloscope”.

Micro tended to focus each issue on a particular theme, starting out with articles that concentrated on a particular brand of computer per issue, and later expanding to topics that applied to several computers (such as printers, games, and languages). The articles presented were usually technical in nature and could be very useful for the advanced Apple programmer.[6]

At its peak, Micro had a circulation of about 40,000, with half going to subscribers and half being shipped directly to computer dealers to sell in their stores.

Beginning with the first issue in October 1977, a unique feature of this magazine was the “Micro 6502 Bibliography”, which presented a reference to many different computer publications and the topics these magazines covered that were specifically important to programming the 6502. The cover changed in June 1980, showing a picture that made it look like it was a view from inside the computer monitor out into the room beyond, with text on the screen backwards. If there were graphics on the screen they were reversed, since the computer had the point of view. By December 1980 the logo underwent a change to a more stylized appearance that continued throughout the run of the magazine, until the last issue in October 1984, after which the magazine disappeared from the newsstands.